Watering the Tree of Liberty

I've done very good, I think, about staying away from the current healthcare debate raging around the country as of late. I'm just a dumb, 23-year-old kid with a Criminal Justice background. I don't honestly know much about healthcare. And, I'm not going to start talking about it today, nor will I, most likely, ever get into the gory details of various House bills that may or may not exist. Though, once it's all said and done with you can bet I'll be inciting a riot about those very same subjects right here. (See how I used the blog name in a sentence?)
What I would like comment on are a few things I heard while listening to the August 11th edition of the Rachel Maddow show - available for podcast download on iTunes. 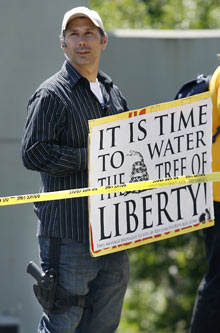 I'll let you all draw your own conclusions about these news stories. I'm disgusted. There was a time when a a man like Thomas Jefferson, admittedly imperfect, knew that there was a time for war and there was a time for democracy. However, it seems that in modern bi-partisan politics, we're just focused on making one side or the other out to be Nazis, which is sadly a recurring theme in town halls as of late. Democrats are elitist Nazis bent on killing grandma and babies with down syndrome led by a middle eastern terrorist who infiltrated his way into the US political machine, and Republicans are crazed torch carriers bent on tearing apart Frankenstein's monster in order to water the garden of bad intentions, to borrow the euphemism. I'm disgusted. I just want to shove all this craziness off the edge of the world and discuss things with the rest of the simpler-minded folks. Then, I realize we're not living a thousand years ago, and we should know by now that the world's not flat. We should know these things, because we've learned the difference between fact and fantasy. When you can see it, smell it, touch it, taste it, measure it, weigh it, and bump uglies with it, it's real. Like birth certificates, like guns, like videotaped riots. They're real things. Shouldn't we know the difference by now?
I'd say write your Congressman, but at this point...give them a break. Let them go beat off on the Appalachian Argentinean trail or whatever they want to do. They're not even able to do their jobs right now anyways.
Love and Lyte,
Fire Lyte
Email Post
Labels: Controversy News