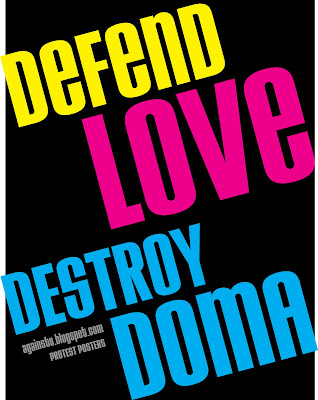 It was announced earlier this week that a counter to the long-standing Defense of Marriage Act (DOMA), has been sent to the House floor this week by Democratic Congressman Jerrold Nadler with a rather staggering number of over 90 initial supporters of the bill. Aptly titled the Respect for Marriage Act, the bill - should it become law - would fully repeal DOMA. What does this mean? Well, DOMA does two things:
The RMA (give me a break, it's a long title) would allow those legally married to retain their marital status despite the state they choose to live in, and would require the federal government provide aide to same-sex couples with equal zest. While this would be an incredible step in the right direction, it would still leave us as a country with a long way to go. This bill would not require that all states allow same sex marriage. Nor would it force religious institutions into providing marriage services for those they do not wish to marry.
I'm actually fine with the second one. I don't want any government institution telling a religious one what they can and can't do, whether it works in my favor or not. Because, one day, it won't be in my favor, and the separation of the two institutions is there for a reason.
I do not deny this would be a big plus in the WIN column for equal rights, but I'm wary that we would get a bit complacent. Sure, this sounds like a good thing now, but think how very quickly this will divide our nation more so on this subject. With gay couples able to move into whatever state they want and retain their rights, the conservative states will most assuredly put those nasty constitutional amendments in their state constitutions, if they haven't already done so, as a precautionary measure. A veritable Keep Out sign, if you will.
However, with the federal government recognizing same sex marriages, and handing out benefits to those couples and families, it is surely only a matter of time before those other deplorable barriers are battered down. The President is behind it, and Congress is getting behind this thing. If you would like to let your Congressman/woman know you would like a repeal of DOMA, you can contact them via the website Repeal Doma Now. This is a site run by the Human Rights Campaign, allowing you to put in your information, and send a letter to your respective person in power. Don't worry if you don't know who it is. The site looks all that up for you. Oh, and it even has a handy example letter already written for you if you don't want to write one yourself, or if you just want some ideas.
So... Write your Congressman! Let them know you support equality! Send good thoughts, prayers, blessings, and energy to these individuals as they cast their votes on what could be the biggest equal rights vote of the decade.
Love and Lyte,
Fire Lyte
Email Post
Labels: Controversy News