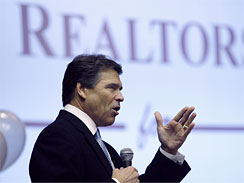 Let's dispense with reality for a moment and say that you have complete control over life, employment, and, to a lesser extent, fate itself. What would you do if you could bend situations to your will? If your words could remove your obstacles or put people to death?
Unless you've been living under a rock, which might not be the worst place to live right about now, you've heard something about Rick Perry lately. Over the summer he was the redneck governor of the Bible belt's belt-buckle, hooping and hollering in front of a crowd of sheeple about Texas' need to secede.
Well, now Governor Perry is getting some heat for putting the kibosh on an investigation into the execution of Cameron Todd Willingham. The issue here is this: Cameron Willingham was a low-level criminal, guilty of abusing his wife and cursing worse than any sailor. He wasn't a poster child for anything socially mainstream. In 1991, there was a house fire that killed his three daughters. Supposedly, there was evidence to prove Willingham committed arson which led to those three deaths, and the state of Texas put him to death in 2004. His last words proclaimed his innocence and that the state knew it.
Flash forward to 2009 when a now-candidate Rick Perry is facing a possible removal from office through the 2010 election of his rival Kay Bailey Huthison. In this year, the Texas Forensic Science Commission decided to look into the evidence used to convict Willingham. Two days before the Commission was to review a nationally known fire expert, who believes that there was absolutely no evidence of arson, Rick Perry fired and replaced the chairmen and two other members. The new chairmen halted the investigation (presumably at Perry's behest).
You see where this is going, right? Texans are really, really pro-death penalty. The joke is that Texas is the drive-thru death penalty state. Rick Perry isn't interested in making sure justice is done so much as he looks tough on crime, especially a criminal whose history is far less than stellar. However, what would have happened if the commission had found that the man was wrongly executed? He would have just been another tick mark in the long list of innocent individuals who have been wrongly executed. I honestly doubt this would have made national headlines, which is pretty pathetic, but true.
Long story short, this man needs to be put out to pasture. It's very nearly time for someone else to take the reins away from the most secretive governor Texas has seen in a really long time. Even W allowed the media access to documents prior to an execution, the ones proving the person's guilt. But, not this guy. He keeps them under wraps, under a supposed cloak of attorney/client privilege.
Texas, vote someone else into office. This man is making the stigma of the ill-educated redneck who doesn't care about facts and raises a shotgun at every sudden movement into a national calling card. He likes it. He embraces it. Please, oh please, inject some modern intelligence back into the Texas political climate.
Love and Lyte,
Fire Lyte
Email Post
Labels: Controversy News