Yesterday was my first time making Thanksgiving dinner. Yesterday was the first time I've ever roasted anything, mashed anything, or otherwise truly made a family feast - Holiday style. I was excited and a little queasy, because if I messed this up...well, it would go down in family lore and we'd be having pizza for dinner. I couldn't have that. So I got my 11.2 pound turkey, opened it up, removed all the icky bits, and set to work seasoning it. I melted a stick of butter - I used real butter, because it's Thanksgiving and I felt I deserved it - and rubbed it all over the bird. I seasoned it with salt, pepper, lemon pepper, and chipotle seasoning. I also sprinkled a bit of parmesan cheese over the whole thing, just to give it a bit of a crunch. I stuffed it with orange and lime slices to keep it juicy. I placed celery stalks, carrots, and onions in the bottom of my roasting pan and set the turkey on top of it. I poured a Ginger Ale and water mix in the pan to help keep the bird moist. Just for good measure, I sprayed a bit of that sprayable butter all over it. It looked a little something like this. 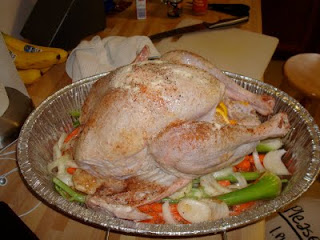 You really have no idea how proud I was making that turkey. I popped it in my oven, set at 325, and let it cook for an hour to get golden. During this time I watched the Macy's Thanksgiving Day Parade, which was a tradition I've had with my mother since time began. Also, because my mother was having a bit of separation anxiety (they're in Texas and I'm now in Illinois), we spent about a half hour or so on Skype. It was fun...sort of like spending Thanksgiving morning together. After an hour, I pulled this out of the oven for basting. 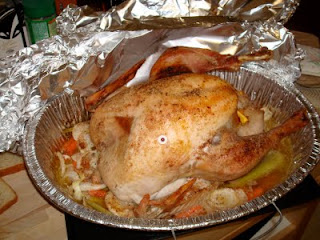 It was GOLDEN!!!!!! Again, the thrill I got was unreal. I started thinking, I might actually pull this off! I basted it with my brand new turkey baster, made an aluminum foil tent on top of it, and stuck it back in the oven for an hour and 15 minutes. During that time, I actually took a shower. (YEAH!!!!) We bought tickets online for New Moon so we could catch the 6 o'clock showing. I also polished off 3 cinnamon rolls. (YUM!!!) I took the aluminum foil of the bird, basted it, put it back into the oven and set to work on the rest of dinner. I made stuffing, potatoes, and green bean casserole. I had made the peanut butter pie the evening before. When the bird was finally done it looked like this. 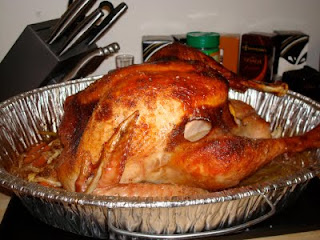 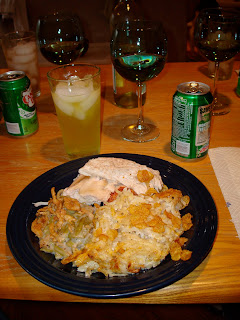 YUM!!!!!!!!!!!!!!!!!!!!!!!!!!!!!! Then it was nap time, which is, potentially, the best part of Thanksgiving. Having a full belly, yummy food slowly injecting my body with tryptophan, and dozing off to the tune of family movies playing on Disney channel. Then, about 5, we headed off to the movie theater to see New Moon. I'm telling you, if nothing else, that movie made me 1000% more dedicated to hitting the gym. Can you say Taylor Lautner's ABS!!!!!!! (Is that boy legal yet?)

Today is black friday, and I'm resting up for the ridiculous dinner shift I'll be working. It usually takes me 15-20 minutes to get to work, but I'll leave a bit earlier just in case. I hope your Thanksgiving was just as wonderful as mine was. Now, though, I'm about to head into the kitchen and pick at the leftovers.