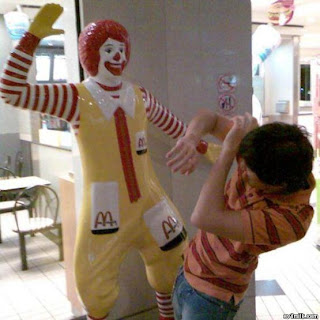 Your mother told you. Your trainer told you. Your coach in high school told you. But you never listened, and, until now, there was really no motivation to do so. However, what would you say to a study from Oxford University that was recently released suggesting that junk food is both "as addictive as drugs" and making you stupid?

The study was performed on rats, of course, and showed that a high fat diet - even over short periods of time - can actually slow the brain processes and markedly decline your cognitive ability. Summed up: it makes you dumb.


A high-fat diet sends a message to the brain that it's a time of plenty, so the neurotransmitters – brain chemicals – tell us that we don't have to be quite so frenetic about finding food. Our huntergatherer instinct is switched off, or at least put on hold....


It shows that high-fat feeding even over short periods of time can markedly affect mind and body. The rat intake translates to a diet of about 3,000 calories a day. Something like going to McDonald's every day for lunch would probably do it. If you have a heavy weekend of excess, it's probably a good idea to make up for it with a healthier few days.

Now my report cards make sense! The dollar menu is responsible for the fact that I couldn't make good enough grades. Something else that I can blame for my inability to perform! In that sense, I find it rather humorous that a European university would come out with findings such as this. It is a very American sentiment to find a scapegoat for all the problems we deal with. Can't lose weight? It's genetic. Take this pill. Can't make enough money? It's the government's fault. Stage a protest. Can't make good grades? It's fast food. Boycott McDonald's.

Except on days that end in 'Y'.

Will there come a day when we are responsible for the choices we make? Maybe it's not so much the bad food as the vast quantities of it we insist on eating on a daily basis. Just a thought.