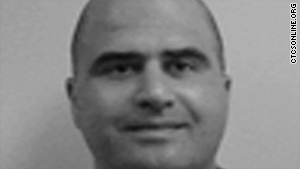 Yesterday, Major Nidal Malik Hasan, an Army Psychiatrist, opened fire without warning at the Soldier Readiness Center in Fort Hood, Texas. As of 7:09am it was reported that 13 people are confirmed dead and 28 more are injured and in stable condition. It was reported that Hasan shouted out "Allahu Akbar!" (God is great) immediately before opening fire. This is a phrase that has been shouted from the rooftops by Iranian rioters in praise of overthrowing their corrupt government.

An ABC news report I watched from Chris Cuomo this morning stated that Hasan didn't necessarily have a target, but that it appeared the man aimed to kill. The big question that, obviously, hasn't been answered in less than 24 hours is 'Why?'. This man gave no warning, nor does it seem there was any clear motive.

Speculation at this point amounts to an amalgamation of feelings Hasan had about being ridiculed by his fellow officers for his Palestinian heritage (being called Camel Jockey by his fellow soldiers) along with his trepidation over being deployed. With horror stories coming in daily from Iraq and Afghanistan about the realities of war, it is very likely that this man's psyche just snapped out of fear and frustration.

However it happened, it has left 12 dead. I would like to have a moment to remember these people that lost their lives. May their spirits be blessed. It should never be forgotten in the media whirl of celebrity feuds and beautiful people doing outrageous things that we are in a war. Whether the war is right to be in, at this point, is so far beside the point as to be laughable. We're in it, and the most progressive estimates are that we won't be out of that area for at least another year, with more conservative estimates ranging in the realm of several years. Possibly, truly, never. Pray for peace and sanity in this disgusting assault on humanity that happens when people go to war with one another.