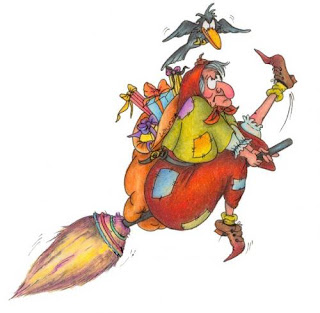 Tomorrow is the eve of Yule, the longest night of the year, the Winter Solstice. I'll be sitting by the fire with Partner, eating good food, and waiting for the Sun to return.

May your Yuletide be blessed!

When the Wheel of the Year brings us to Yule, the God is reborn through the Virgin Goddess. The God is represented by the sun which returns after this darkest night of the year to again bring warmth and fertility to the land. The many lights on houses and trees at Christmas is a modern version of the pagan custom of lighting candles and fires as acts of sympathetic magic to lure back the waning sun.

The Wheel of the Year is often symbolized by the wreath, a circle that has no beginning and no end. Hanging these commemorates a new beginning of the ever-moving cycle of life. Because the symbolism of the wheel was so important to this Sabbat, it became a day sacred to Goddesses of the spinning wheel. In this instance, the spinning wheel is a metaphor for the great Wheel of the Year over which the Goddesses have always been thought to control.

Gift giving is a central part of Yuletide festivities dating back to the Roman celebration of Saturnalia – which coincided with their New year. The Norse used bells to herald the coming dawn, and new year. In Sweden wooden roosters are painted to symbolize the time when roosters were given a place of honor for the 12 nights of celebration, then sacrificed and eaten at Twelfth Night. Gold coins are also Yuletide traditions representative of the Sun God. This comes from Ancient Rome, but is still a part of Jewish Hanukkah celebrations. From the ancient, Druidic veneration of evergreen trees we get Yuletide, or Christmas, Trees. These are typically decorated with symbols representing wishes for the coming year. Holly, pine, and mistletoe are also ancient symbols given to us by the Druids. Kissing under the mistletoe is a type of binding, as it publically declares the couple’s intent to marry.

Bake cookies, sing carols, light a Yule log, or decorate a Yuletide tree with wishes. The Yule log could be the traditional Oak, or whatever speaks to you. Carve three holes in it for three candles representing the three aspects of the Goddess. Burn this the evening of Yule. Give gifts and celebrate the passing of the old year, the turning of the wheel, the birth of the God, and the promise of the New Year!