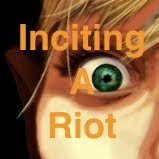 Episode 28 of Inciting A Riot: the Podcast has arrived! Today, we’re Inciting A Paid Riot and taking on the notion of getting paid/charging for magical services such as divination and spell-casting.

Word of the Day: repartee

Sociology: Unschooling – ever heard of it? Didn’t think so.

Spirituality: Getting paid or charging for magical services

We also have your listener feedback and my weird rambles at the end of the show.

Remember you still have time to enter April’s Swag Draw!

Send all comments to IncitingARiotPodcast@gmail.com! Tweet me @IncitingARiot, subscribe through iTunes, check out my Examiner articles, vote on Podcast Alley, and follow the blog at IncitingARiot.com!