Skip to main content
Labels
Posted by Fire Lyte May 09, 2010 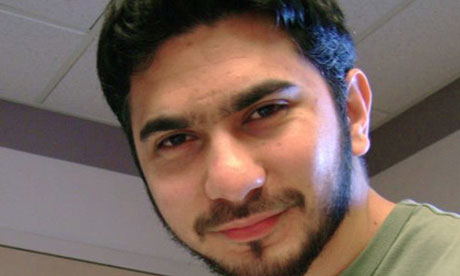 Interestingly enough, however, is that many of the organizations claiming they know the facts about Shahzad seem to be pulling them out of thin air. One story that began circulating almost immediately was that South Park's recent controversial episode involving Muhammad in a bear suit was the reason for the attack. Then it was Pakistanian Taliban (who claimed they didn't do it, but they didn't mind that somebody tried it), and the list went on from there.

Funnier still is that the man now at the heart of this story was a fairly model (LEGAL) American citizen living the American dream until 2009 when his life seemed to take a turn for the worse - he defaulted on his home loan and quit his job. The guy lost his home to foreclosure, headed to the middle east, and then *poof* appeared back in America with a car full of fireworks and fertilizer. (Apparently he missed bomb-making class at terrorist school.)

No group claims ownership of this guy, and he has yet to say he's actually part of any organized terrorist cell. Reports say he's been cooperative with officials, and he gets a gold star for playing nice. Whatever.

In scary news: Joe Lieberman, the guy who wouldn't let healthcare be, has come up with a new law that would turn Big Brother into

REALLY FRIGGIN HUGE BROTHER!
The bill he has proposed, which he's calling the Terrorist Expatriation Act, would effectively strip citizens of their citizenship - and all rights accompanying it - should they be suspected of being 'associated' with terrorist groups. The Washington Post reports that Lieberman's office has further clarified the State Department would fully and of its own accord assign blame for people they feel are working with terrorist groups, and then strip them of their citizenship. Notice how there's no middle step.
No middle step like...oh...I dunno, a TRIAL?! When someone accuses you of something, shouldn't you get the chance to defend yourself? Not if good ol' Joe gets his way. Now, it's funny, because depending on which news source you look at, either tons of Republicans are backing this guy, or nobody is. I remember the rush to pass the Patriot Act back in the early 2000s, and I hope that we remember the shame of that particular piece of legislation.
What Shazad did could have been bad. It wasn't, but it could have been. He will pay for it with, probably, a life sentence in some maximum security get up. But, I have to speak in the future tense here. The guy hasn't gone to trial yet. Nobody has gone to trial for this crime, yet. We cannot be the country whose Big Brother government can revoke your citizenship based on a hunch. We can't be the people who are ok with infringing on basic civil rights to the point of racial profiling and bullying of those that have neither the resources nor the voice to fight back.
Because, if we do this, if we push these lines that Arizona and Joe Lieberman and Scott Brown and others are wanting us to push, then where does it end? Wbat group is safe? Let's Big Brother the gays, because they're getting too swishy. How about the blacks or the Jews; they haven't been the subject of a witch hunt in a while? Oh, speaking of that, what about witches! Let's burn a few! Gardeners are taking money from farmers by growing their own produce! Fat people are causing holes in the ozone with increased flatulence!
I mean, let's get ridiculous here. This is what a slippery slope looks like, Rioters, right before you tip over the edge.
Oh, and by the way, it's 2010.
Quick Big Brother news: Check out this REALLY scary ad from Pennsylvania [below] about paying your taxes. You wanna talk Big Brother? These guys have it down pat. Wonder how far we are away from legislating something like this?
Love and Lyte,
Fire Lyte
Email Post
Labels: Affairs of State Controversy News Soapboxes