Skip to main content
Labels
Posted by Fire Lyte May 26, 2010

The Mosque and The Douche 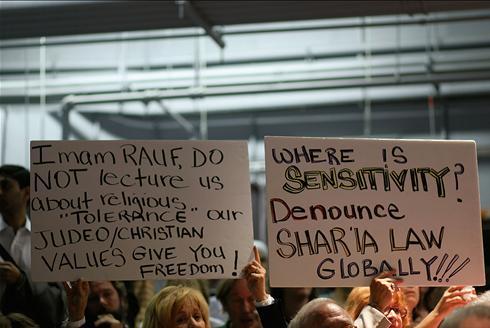 New Yorkers are up in arms about the building of a Muslim mosque 2 blocks from the site of the Twin Towers disaster. Protestors say that it is a slap in the face of those that died and to the surviving families to build a Muslim church so close to where Islamic terrorists destroyed a building.

If a black man kills your mother, do you feel you have the right to keep black people away from you forever? If a Christian kid bullies your child at school, can you have all Christians segregated into separate classrooms? One bad Muslim does not mean that all Muslims are bad. 100 terrorist Muslims does not mean that the hundreds of millions of Muslims around the world are evil.

9/11 happened. It happened and we need to get to a place in this country where we can get the hell over things. The Oklahoma City bombing happened, and somehow people have gotten over it. Columbine happened, and we've coped. But, gosh, make it about race or religion and we just can't wait to judge an entire group as though they were a physical extension or accomplice in the deplorable act.


Hey America!
GET OVER IT!
By the way, the mosque got approval. It's being built. Victory for religious freedom, much?!

In very different pop culture news: Jesse James - the now-ex-husband of Sandra Bullock - went on television last night to do his public mea culpa since the world found out he'd been sleeping around on America's Sweetheart. First off: I could care less where his tattooed man-bits have been, but something struck me about what he said.
He said part of him wanted to get caught. He wanted to get caught. If he really wanted to get caught, he would have told dear Sandy that, "Hey! I'm heading over to my mistress' house for a bit to get my freak on with the girl with the swastika on her forehead. No...not Darla, the other one. Yeah, Trixy. Do you need me to pick up some milk on the way back? Ok. See you at 6!"
I hate when people say, "I think I wanted to get caught." No you didn't. If you had, you wouldn't be sneaking around. The point of the sneaking around bit is because you don't want to get caught, because you know it's wrong.
What do YOU think about either of these topics? Should we continue to punish a house of worship due to the fringe actions of a terrorist group? Should we give cheaters the benefit of the doubt? Leave a comment, Tweet me @IncitingARiot, or email IncitingARiotPodcast@gmail.com with your responses!
Love and Lyte,
Fire Lyte
Email Post
Labels: Controversy Gripe Department Idiots News