Speaking of the Ill-Informed... 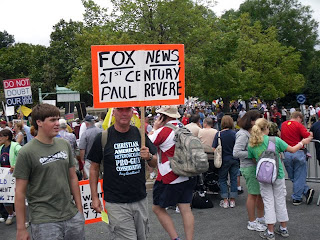 Let's talk about that Glenn Beck rally one more time! The 'Restoring Honor' because apparently it got a bit tarnished rally was held recently in Washington, D.C., led by far right-wing Tea Party Golden Boy Glenn Beck. Now, forgetting the silliness of Beck planning the day as some method to imply that middle-class, Republican, white folks were totally behind civil rights since the beginning (vomit), I would like to draw your attention to something that happens quite often when Beckheads gather.

The New Left Media is a fabulous news project that I've covered on the blog before put on by two college students. They are well-informed on current events, the geopolitical landscape, history, facts, figures, and the exact location of every single far-right gathering of conservatives in America. All the interviewer, Chase Whiteside, does is ask attendees of these events simple questions about current events - such as, "What do you feel are some of the problems facing America today?" - and then asking them to follow up - as in, "Now, why, exactly, do you feel Obama is a socialist because of [cap and trade, his blackness, the fact that he plays basketball, the way he's just so darn calm all the time because...you know...that's just not natural]".

Obviously, conservatives are not all like the people depicted in these videos, and occasionally they get somebody who can discuss matters beyond the talking points they're spoon-fed by Fox news, but the videos are illuminating. They depict an enormous, and ever-growing, segment of the population that is doing what I warn each and every one of you against doing: getting your news/views from one news source. This source, nearly 100% of the time, is Fox News - namely Glenn Beck and Bill O'Reilly. These people have exceedingly skewed, ill-informed, and strongly biased viewpoints centered around faith in the Christian God and faith that what they're being told through these conservative television personalities is accurate.

If you ask them a question as simple as, "How, exactly, do you feel honor has been lost in this country, since you're attending a Restoring Honor rally?" they turn into blubbering buffoons that cannot speak past the sound bites they've been told by their champion, Mr. Beck. They don't want to know that the number of illegal immigrants in this country is lower than it has been in 10 years. They don't want to know that jobs are actually on an upswing or that Obama is a Christian. They still have a hard time believing that there are no weapons of mass destruction in Iraq, and they firmly believe Sarah Palin is getting the bummiest of bum reps.

And while I giggle a bit when I watch these videos, I also get very afraid. This is what happens when people cannot think for themselves, or - perhaps worse yet - are not willing to think about events/situations/views from a different perspective. Their bigotry and intolerance is almost unrecognizable to one another, because they are so steeped in strange, incorrectly wired associations. Every political or social point comes back to God or 'He's a damn socialist/communist/Muslim/etc.' without actually ever knowing what the words 'socialist' or 'communist' or 'liberal' or 'Muslim' or any of the other labels mean. They poke fun and deride liberals with idea-words like 'Obamacare' without knowing a thing about the benefits of a public option or the full effect public healthcare improvement would have on the middle and lower classes. I weep because of what I see in these videos.

My hope, dear pagan Rioter, is that you see these videos and use them as an impetus to KEEP YOURSELVES INFORMED! Arm yourself with knowledge. It is exceedingly powerful, and perhaps so much more so than anything found in a magical text. This anti-social, anti-government, anti-establishment ideology and rhetoric must stop, and it begins with looking beyond the boiled down headline that is forced down our respective throats by the news media. If a television news person is giving their editorial commentary on the actions of a political figure, take a look at at least 3 different news sources - including one newspaper - to get a fuller view of the situation. If Rachel Maddow says that some right-wing ideologue is trying to kill all the gay folks in America, but both Diane Sawyer, the Washington Post, and Anderson Cooper say that's total bollocks, then I'd go with the bollocks.

With all this in mind, and with no further adieu, I give you the latest videos from the Restoring Honor (whatever the hell that means) rally in Washington, D.C.