Margaret Cho and My Mom 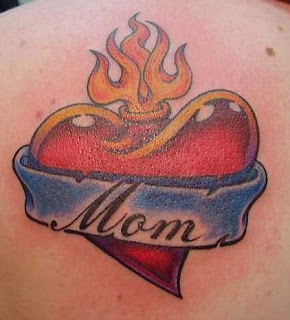 Margaret Cho has this bit she used to do - or...I dunno...maybe she still does it. I don't keep up with Ms. Cho all that much - in which she talks about a time her mother left a message on her answering machine asking if she is a lesbian. Cho says her mother repeatedly informs her that, "You can tell me. You have a cool mommy. Mommy know all about the gay! You have such a cool mommy!"

Well, I first heard that bit when I was - I'm pretty sure - around 18 years old. I don't believe I had even moved to West Virginia, yet. It was the summer after I graduated high school, and I was just beginning to experience the world of The Gay. Cho, being a pretty integral part of the gay comedy scene, (I would come to learn there are almost an infinite number of gay scenes with almost as many sub-scenes, niches within niches, all with their own types, dress codes, and ways of doing the Deed.) was one of the first comedians I'd heard talk so openly about sexuality. Also, being young and stupid, I decided this was funny enough to play for my mother.

I played it for her in our living room with my brother - the archetypal jock/frat guy - listening in. While she giggled at parts of it, she promptly made sure to tell me that we did not have a cool mommy. Furthermore, if either of us - though I believe she looked at me when she said this - tried to tell her we were gay, she would most definitely never be cool with this.

Now, this did not come as any kind of shock to me. My mother was, and still is, an exceedingly conservative woman who likes her bubble to stay nice and unpopped. Gay men were on television, in big cities, and could most definitely not have come from her womb. They were obscure and probably disease-ridden and most definitely godless heathens. Or, something like that.

So, when she said this, it wasn't like it was a hurt to my ego or anything. But, it was something that came up, and still comes up long after she met, became okay with, and subsequently seems to care for my Partner, in my thought process over the years. In fact, though I have come out to my mother (actually, I came out to her several times over the years, but it wasn't until I moved in with Partner that she began to get the big ol' gay picture) I never had the heart or guts to say the key words, "I'm gay." It's obvious. It's there. We've talked about it, but something about the way our family has always communicated meant that I shouldn't say those words.

Communication like talking around phrases like, "I love you," or "Even though you're related to me by blood, I really don't think I'd pull over if you were stranded on the side of the road bleeding and burning." You know...stuff like that.

Nothing really triggered this to come up, again, but there it is. Her words pop up over time, sometimes coinciding with traditional family-related events - like holidays - and sometimes just while I'm mulling things over in my head on a coffee break. This time it was a combination of both: We just celebrated two holidays, and I've been mulling over my familial relationships. Something which I plan on discussing a bit more about later on this week.

It's funny. My family has come so far in their acceptance of me, but so often a conversation or email or comment turns up that surreptitiously lets me know that - or at least makes me think that - it's all sort of an act. To look like, or make themselves feel they're being, the 'good' parents. Headway, yes, and they've not done anything outright to upset me. But scratch a little off the top layer, and it's there.

Perhaps the point of this it to mind your words. As the Buddha would say, you must have Right Speech. Weigh your words, for they may be the very phrases that follow your children, friends, co-workers, or perfect strangers around for years thereafter. It's kind of inconvenient, this, because it's never those exceedingly harsh or rude or outlandish statements that seem to follow us like Eeyore's cloud. No, it's the small things. The lines spit out the sides of our mouths. The ones we almost fully believe we never said, because we weren't paying attention.