Quick Note: The point of the Riot

From time to time I feel I have to put this disclaimer out there. This time I'm going to put it in bigger letters to make the point.


I DO NOT KNOW EVERYTHING.
I hope that was clear enough.
While I take on a number of different topics, and I choose them based solely on what interests me or has gotten me thinking at the time, I by no means feel I am an expert in any of these fields. I fully and openly admit that I am very young and have a lot left to learn. I also fully and openly admit that when I say things, I probably get much of it wrong. I do the best I can, spending hours researching each item that is put on the blog and even longer for the information I put on the podcast.
I have said from the beginning that this Riot is first and foremost a place for me to ask the questions nobody seems to have provided very good answers to. Or, at least, find evidence to support the answers given by the pagan community at large. Sometimes when researching I come across information that seems to directly go against the given "common knowledge" of the New Age and Pagan communities (i.e. the Law of Attraction, the veracity of ancient texts based on their age, etc.).
I put this information out there, because these are the answers that I find when I ask the question and then search through books, articles, and speak to members of the community. If I'm wrong about something, please enlighten me! I'm doing this to challenge convention, to ask why we accept what we accept. If there's a good reason behind it, then I'm all for it! The problem with much of the pagan narrative is that we've accepted wholeheartedly a handful of beliefs without questioning where they came from. We get pissed and angry when someone simply asks 'Why?' and then expects a damn good answer. If I'm being told that bloodstone will help cure my high blood pressure, I'd like to know how a rock is going to do that when blood pressure medication hasn't seemed to help. (Just as an example.)
Is the entire handful of beliefs useful, or is some of it fluff and filler? That's what I'd like to find out.
But, I do not, have never, and will not pull any punches. If in doing research - both in and out of pagan texts - I find a big ol' hole in the logic of, say, how Wicca really isn't mostly based on ancient tenets or why pagans get so up in arms about the portrayal of deities in the media, then I'm going to point it out. Repeatedly. Until someone comes up with a reason why it is the way it is.
I invite dissent. Hell, it's the only way I'm going to learn. If nobody says anything to the contrary, and makes a good argument while doing so, I won't know that I'm wrong. I won't stop researching, but I probably won't think to look at the counter argument.
Be that as it may, I extend an open invitation to anyone, anytime, about any topic they choose, to come on my show and discuss it with me. I would love to debate you on an issue. Any issue! Discussing religion and magic and philosophy and sociology and all of this is better than chocolate cake fed to you by nearly naked poolboys on a Caribbean island somewhere. It's challenging, yes, but it shouldn't make one angry.
One last thing: If you happen to be the guy who feels that I need to 'sharpen [my] pitchfork' before I go 'jabbing the national community,' then grab the nearest microphone. I'd love to debate you on whatever it is you feel I've not delved deeply enough into.
Ok...really...one last thing: I would just like to note how, since I did the original 'Inciting A Debated Riot' with the author of the Great Tininess blog - a Chicago pagan - that the only negative, rude, or otherwise adverse comments I seem to get about me, my personal character, my age, or my obvious lack of knowledge seem to also come solely from the Chicago pagan community. I'd just like to remind those of you in that community of exactly why I created Project Pagan Enough. It's for folks in communities like that who band together to make those of us that are young, inexperienced, questioning, or are otherwise merely not in your circle feel as though we have little right to call ourselves Pagan. Or, at least, that we should be seen and not heard. The debate is over. He said what he wanted, as did I. Let's all build a bridge and get right on over it. I have nothing I feel I need to prove to the Chicago pagan community. I am just fine with my position in it.
If you have stuck around until the end of this rant, here's a sexy picture of Tom Welling as a prize.
Love and Lyte,
Fire Lyte 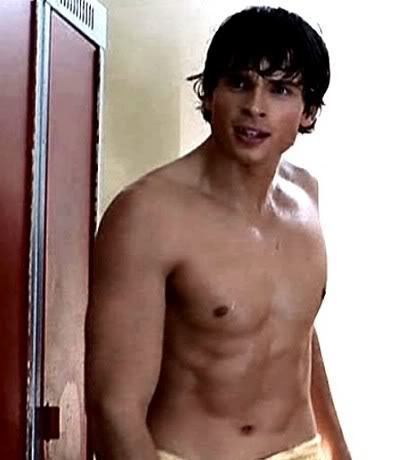