Thanks Christian Day! (And screw you, too!) 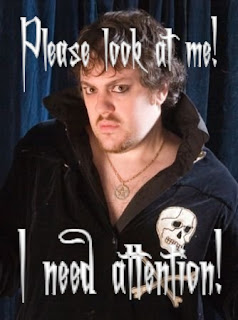 Recently, a couple of pagans have been attempting to full-on football tackle the nearest news camera/reporter for an opportunity to glean some semblance of fame. Z. Budapest was the first of the two, and on Episode 49 of the podcast Cory and I do a fine job of properly applying both torch and pitchfork (as well as his interesting collection of roots, stones, and bones) to her story of disallowing transgendered women to participate in a Dianic ceremony at this year's Pantheacon. However, since her original outlandish statement was made public, it has been reported that both sides of that debate have sat down and attempted to apologize and find common ground.

However, the second pagan media whore, Christian Day, has no such luck. In case you don't know who he is (don't worry...you shouldn't), Day is a podcaster, a shop owner, and all around Laurie Cabot groupie. If you'll recall, Cabot was a media grabber herself beginning in the 1970s and running almost three decades, causing mayhem and grabbing newscasters' attention until the mid-90s. Though, arguably, she's still at it, as she was a part of that famous Biography channel special on witches that made us all look like either devil worshipping baby killers or opium addicted special ed students.

Christian Day has apparently been trying to reclaim the word 'warlock.' Warlock either is derived from a middle English word meaning 'oath-breaker' or an Old Norse term meaning 'caller of spirits.' (However, just so you know, the Oxford English Dictionary denies the second derivation, as do most philologists.) Of course, when pagans get pissed off about something, they must go to an extreme, so when Charlie Sheen (of all people) went on one of his recent coked out rants and called himself a "Vatican Assassin Warlock," Christian Day took some offense. Not about wanting to kill everyone at the Vatican, but about the fact that Sheen said the word warlock. Because, you know, Day now has copyright on the term oh wait...no he doesn't...he's just crazy.

Well, good ol' Mr. Day decided that he and his cabal of followers were going to bind Charlie Sheen, but they couldn't just decide - like all other nut jobs with a pentacle and access to too much patchouli - to do it in the privacy of one of their fairy glend. No...that would be too decent. Day had to first publicly make sure that every media outlet available (a small list of them includes, but is most definitely not limited to: CNN, PerezHilton.com, TMZ, the Boston Globe, Fox News, Entertainment Weekly, the Guardian, and a host of other blogs, radio shows, and cable news talking heads) would cover the fact that a few folks were going to dress in cheap halloween costumes and bind Charlie Sheen.

Naturally, being a media whore, Day couldn't stop at merely saying he was going to do this ridiculous publicity stunt. He then had to film it for all the internet to see. (Video, of course, is below.) Which they now have. This has gone viral. And, I don't mean viral in an 'every teeny tiny pagan blogger with a few hundred followers is talking about it' kind of way. I mean this video is being played on major news networks, streamed online, tweeted and re-tweeted, and posted on hundreds of blogs. It is a virus, and it shows the worst of the pagan community.

Did he have to shake a dog-headed rattle at a skull? I mean, really, did he have to dress in a Count Dracula style cape with a visible cross? (Not a crucifix, but do YOU think the average Christian is going to tell the difference between an equal armed cross and a perversion of their sacred symbol? Methinks not, and methinks, also, that Day is probably counting on that.) Did they have to break out a machete sized athame? Did he have to have several news agencies there to videotape and photograph the event?

Answer: Of course he did. He is a media whore, dear Rioter, and this is what they do.

However, I would like to use Day as an example. An example of all those times when podcasters/bloggers say they hate when folks get in front of the camera with their fairy wings or goth get-up, spouting off all sorts of bullshit about the right way to use terms like 'warlock,' 'goddess,' and 'high priest.' For, dear Rioter, I know that I - and several other podkin and bloggers - have gotten much criticism and hate mail for saying that I'd rather normal, functioning adults be put in front of the camera, should the need allow.

I never mean that we cannot dress how we want when we go to parties, functions, conventions, gatherings, etc. We should have a time of play and frivolity. But to purposely seek out the media, and then to go in front of the world dressed up like he is and saying what he says, he sets our entire community and cause back generations. Goodness gracious! He put the video of his poorly put together and rather sad ritual under the Entertainment category on YouTube! This calls into serious question the reason why he would make such a video or launch such a media campaign. 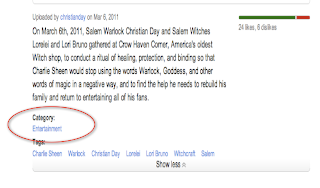 Yes, there are plenty of folks in the media (mostly fictional) who come off as nice, normal people that just happen to be witches. But, given that our community is quite small by comparison, and given that we are such a solitary and secretive people, the greater community is rarely given a glimpse into the lives of real pagans. Of the folks next door. And, we can say to one another all day long, "Pagans are the lawyers, teachers, retail workers, cops, doctors, etc. in your community. They're normal, average, everyday people just like you and me," but if that message is only reaching a mostly pagan ear, then it is moot. It is meaningless.

What upsets me is that a resounding cry has gone out all across the internet by pagans against Day. But, none of those voices are being heard, at least, not on the level Day has reached thus far. There is not an equal and opposite voice in the mainstream media, welcoming cameras and newscasters into their living rooms. There is no soccer mom witch who is on CNN saying, "Look! See! I am a normal, functioning member of society that looks and acts and dreams just like you. I just happen to be pagan."

And I realize that most of the time when I (or those like me) say these kinds of things, we are met with extreme amounts of criticism. How dare you say I have to be normal! How dare you tell me I have to act or dress a certain way. How dare you act like you're better than me! None of those are the case, unless you also happen to be a Pagan Media Whore. If you are not actively seeking out cameras, reporters, or general fame by being an outrageous, ludicrous, incorrect stereotype, then let your freak flag fly! I say do what you want in the privacy of your home or your community. But, if you are choosing to put yourself out there as the face of the pagan community, which is exactly what Day is attempting to do, then you should have the decency to not make us look like stark raving mad D&D playing, LARPer wannabe, costumed social rejects who cast spells on sitcom actors!

Christian Day is the exception in the pagan community. Not all of us are like that. We know this, but the rest of the population does not. He gives those of us that hold down good jobs and don't dress like everyday is Halloween a very, very bad name. Honestly, I have to say, I pity him.

However, Rioters, Day might make you $1,000 richer! This is what all those Word of the Day segments have been for! Recently, on Day's Facebook page, he offered a $1,000 reward to anyone that can prove to him that 'warlock' doesn't mean 'oath-breaker.' Of course, he puts several caveats in there in order to make sure you cannot claim the prize. Such as, one must take into historical context 'why' the word means 'oath-breaker,' and not merely that the word means what it means. BUT!!! I feel we Rioters should take this as a challenge! If we win the money, I say we put it towards a feast at the Supermoot for all podkin and listeners who can attend - on Day, of course.

Quick question: Do you feel Christian Day falls into the category of legitimate pagan, or does he fall into the 'playgan' category? I'm not sure where I stand right now. He certainly looks one way, but he has definitely dedicated himself to another. Just curious...

If you can stomach watching them, the videos are below - both by Day and the edited version the rest of the world saw.