Another story that won't go away this week comes from the "not a Presidential campaign" tour of Sarah Palin. Supposedly, Palin and her family are just going on a family vacation. The former half-term governor of Alaska has been saying in as many ways she can that the highly publicized east coast tour of the US she is dragging her family along is not - repeat NOT - an exploratory tour to keep her name in the news until she announces either her bid for President or attached herself to a candidate as his VP. Of course it's a family vacation! She just has a cadre of press following her, granted press follows her to the bathroom. But the most telling part of all of this is that she is driving around the east coast. In a bus. That looks like this:

Take a little look at that left-hand side of the bus. See that? It's her signature and then a link to her SarahPAC website. (PAC = political action committee. Basically a fundraising organization.) The homepage of the website she has devoted 1/3rd of her "family vacation" vehicle looks a bit like this: 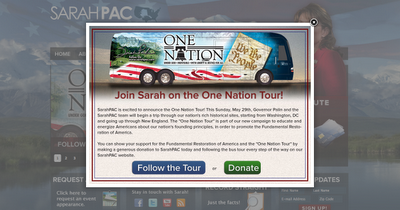 Yes, the first thing that happens when you click to SarahPAC.com is you're asked to donate money. To the website promoted on her "family vacation" bus. But, it doesn't end there! When you 'X' out of that screen, this is the next thing you see: 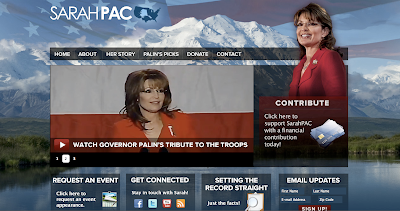 Ok... Well, at least she's changed "Donate" to "Contribute"! That's something! Another 1/3rd of the space on her homepage is devoted to "Hey! We're on vacation! Donate money!" If she's not running for president - or any other office for that matter - then what's the point of this? I realize that at this point in her...let's call it a "career"...she's amassed a bit of money, thus she can drive around in a big, fat bus if she wants. My question, though, is if she didn't want a highly publicized "family vacation," if she didn't want any of us to think her stops to meet with Donald Trump or to grab a bit of attention in New Hampshire on the same day as Mitt Romney's stop in the state... If she didn't want us thinking this was anything other than a family vacation...
Why the damn bus?
She could have flown. She could have road-tripped it in a station wagon like the rest of us. She could have even rented an RV that DIDN'T have her face plastered all over it!
I do not in any way, shape, form, or fashion fault Sarah Palin for making a run for the 2012 nomination. At all. Nope. Two reasons: 1) Everyone is entitled to run for President in this country, as long as they meet the qualifications. 2) I think this blog will benefit greatly from the material her many, many, many campaign speeches will surely provide. But, what I do fault her for is trying to play this game with the American public, who were a bit quicker on the uptake than she thought they'd be.
So, here's a message to Sarah Palin, "Honey! Just own it! We know you want to have your face on Fox News and CNN and all the rest! We know you want to make a run of it. Just own it! Nobody will be mad!"
In "reasons why I want Sarah Palin to run for President" news: Sarah Palin's followers are cultish, ravenous folks, akin to those folks I lived around in Texas that were HUGE George W. Bush fans. Not to say they're rabid or something, but they defend anything and everything the woman says with a fervor unseen in any other political base. Case in point: her recent, highly publicized flub on the details of the midnight ride of Paul Revere. Or, make that the daylight bell-ringing of Paul Revere. Let's watch.
Ok... Now, just like much of what Sarah says, it's obvious that she doesn't really remember the exact details of what she was told and is stumbling around for the facts. Was every idea behind her rambling incorrect? Not necessarily. While some historians are backing up her idea that bells and guns were used, one historian called her "lucky in her history as opposed to knowledgeable in her history." Robert Allison of Suffolk University, who agreed with the gist of the statement, said that no guns were used and Revere did not ring bells, but that they were rung as part of a system set up months prior to be rung at his signal. Anybody remember the signal? Lanterns. He lit lanterns. One if by land, two if by sea. And then he road through the night warning colonists to arm themselves.
Hell, if you asked me to recount the midnight ride of Paul Revere, I'd probably remember that the guy is credited with lighting some lanterns and riding a horse shouting "The British are coming! The British are coming!", which isn't the most factually correct thing either. But, I own that. I own that I really suck at history. I also own that sucking at history doesn't make me any less capable at doing my job, writing this blog, or airing my podcast. None of my "jobs" are hindered by me sucking at history. She flubbed. She should own it. Instead...
She just won't say, "You know, I flubbed a few of the details. We had a good laugh about it afterwards and then used the moment to do a bit more research into Paul Revere as a family." That would be very "family vacation"-esque and educational to boot! But, no, sadly she just keeps on acting as though she never messed up. I just cannot stand when someone so obviously messes up facts and then defends them as though their life depended on it. I'd say it would appear smarter and more poised to own the flub and move on then continue to let the media make it a huge deal by denying it.
One last thing: That "gotcha" question? You know...the one that she was asked that she gave the Paul Revere answer to? Know what it was? The reporter asked her what she had seen and learned so far that day.
Let that one soak in. Real gotcha politics, right? Nobody asked her about Paul Revere, though that's not really a "gotcha" question. Anytime the woman cannot answer a question correctly or straight on and is criticized for it, it's because she was asked a "gotcha" question. A "gotcha" question is another name for a trick question where there is no good answer and serves to make the responder look like an idiot. Asking what she and her family saw and learned on their educational family vacation to the nation's landmarks is not a gotcha question.
But don't let that stop her legions of ravenous followers! They took to Wikipedia to try and revise history to make it appear that everything she said was completely factual. Gods bless those Palin-ites. For just amazing reading, take a quick jaunt here and scroll down to "Now Palin fans are messing with the article." Enjoy!
Love and Lyte,
Fire Lyte
Email Post
Labels: Controversy Education Idiots News Too Funny