A Pride Twice Over

Sometimes people look at me rather oddly, because I do not claim as much nationalism as my fellow Americans. It's nothing personal against the Stars & Stripes; I've just never been a big 'Go Team Go' school spirit kind of guy. I was the guy who went to the pep rally at school because he was forced to, and spent the entire time reading 60s beatnik style poetry in the back of the bleachers. Not to say I've not been proud of my country or my fellow compatriots many times over my short life, but let's just say that collectively being proud of the entire populace - or even a good chunk of it - is a rare thing for me.


Today I am proud of my country. 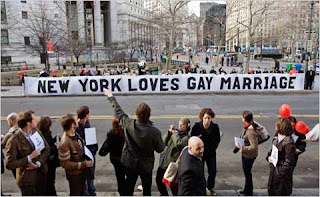 Episode 54 was supposed to come out today, but there was just a bit of news I was hoping would wrap up today before I recorded the news segment: the New York marriage equality bill. Late at night on the 24th, it did. In an unbelievably close vote (33 to 29), the State Senate passed a bill that would recognize full and equal rights for gay and lesbian Americans to get married.

The decisive vote was provided by Sen. Stephen M. Saland, a republican from Poughkeepsie, who had voted against a gay marriage bill in 2009 and remained publicly undecided in the days leading up to the vote.

That's what I kept hearing about all week. People that had never voted for gay rights before, or folks who were typically seen as staunchly conservative, were voting for gay rights. One notable Republican who had a change of heart from his previously unrelenting stance against same-sex marraige was Roy McDonald, a Republican Senator from Saratoga.

Brave words.
So, yes, right now I am exceptionally proud to be an American and finally seeing my country evolve. In additionally prideful news: President Obama announced this week that a little over 30,000 troops will be immediately pulled from Afghanistan and brought home! Afghan forces will take control of keeping their own country safe, and our men and women in uniform can come back to their lives and families. Supposedly, by 2014, we will be completely withdrawn from the area, with 1/3 of troops being withdrawn every year.

This is phenomenal, as for the first time a majority of Americans were shown by the PEW forum to want the troops to come home.

BARACK OBAMA: "Keep in mind we're talking about ten thousand troops by the end of this year, an additional twenty-three thousand by the end of next summer. And we'll still have sixty-eight thousand US troops there, in addition to all the coalition partner troops. So there is still going to be a substantial presence. But what it does signal is, is that Afghans are slowly taking more and more responsibility."

Congratulations, America!
We should celebrate these leaps in ideology, in thought, and in action. We should celebrate our human connection and our sameness at times like these. Come together and glorify the fact that we are doing something positive for the whole of our populace.
I hope you share in my feeling of pride.
Love and Lyte,
Fire Lyte
Email Post
Labels: Affairs of State GLBT News Sociology 101