But, what's with the hatred? Cavanagh lists what he believes are the reasons why pagans dislike the controversial author. Chief among them is that we dislike her for being successful. Then he says it's because she's fluffy - the Queen of the Fluffy Bunnies, is what he says. Then, finally, he seems to feel it's some combination of her flashy marketing capabilities and her telling teenagers to lie to their parents. (In fact, he seems to think most of her detractors base their whole view of her on the book Teen Witch.)

Now, I'm not starting anything with the author of the writer, but he's obviously a fan. A big fan. And proud of it. Good for him. That's great. And, I have to say, I completely agree with him and his message of, "Don't jump on the 'I Hate Silver Ravenwolf' bandwagon just because everyone else is doing it." That being said, while I don't want to say I hate Silver, I do not like her books, nor do I see much value in ascribing to what she writes about.

It's not about her marketing, her success, or her cotton ball mentality. However, the last point about lying to one's parents, the emphasis she puts on this moral code of hers, bothers me. In Cavanagh's words:

Finally remarking on Trayer [Ravenwolf's real name] encouraging kids to lie to their parents because it needs to be said... remember that many of you had to practice in secrecy and keep information from those you love because you were afraid that people wouldn’t understand. Many of you still do. I did not tell my parents until I was comfortable with my religion and felt comfortable enough to continue to practice it with or without their consent. It has been scientifically proven that lying is a necessary process we must all learn throughout life in order to gauge our own personal morality and understanding. In fact, lying is healthy. And we were going to lie, with or without Trayer’s encouragement anyway. I have, you have. Therefore it is a teenager’s prerogative that matters in this instance, not double standards.

As a gay kid who was keeping that kind of secret inner turmoil from everyone to the extent where I wanted to end my life rather than keep going, I can tell you that lying is not healthy.

Be that as it may.

My problem with Ravenwolf is the same with many of the bigger names that Llewellyn seems to push: a belief and emphasis on the veracity of the Burning Times myth combined with dozens of lies about what magic and modern paganism is. She pushes an idea of what "real witches" do and don't do. She seems to not have a clue about other traditions under the pagan umbrella, like Satanism. She dresses magic up as Christian prayer. She says the Christian God and the pagan idea of the divine are the same thing. And, did I mention she fully and wholly pushes the Burning Times garbage and all that goes with it? You know, "Modern paganism as we know it is a direct descendant of ancient 'pagan' practices that were eventually hunted out by the evil, evil Christians." Etc. etc. etc.

Christians are evil, except when they're secretly pagan...or something like that. 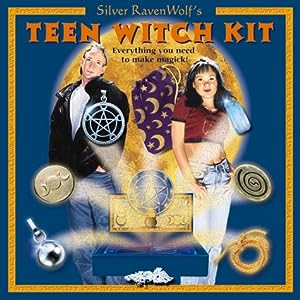 It's not her success. It's not her Teen Witch Kit, her mass-marketed ideas of majjyckkk, or her status as Queen Fluffdumpster Bunny Mother. I could care less how someone makes a buck to feed their family. Heck, that would be the epitome of hypocrisy for a guy that sells his art and, this time next year, is hocking his book to the pagan masses.

What I despise is the unquestioning indulgence in the Great Pagan Set of Bullshit. Christians are evil. Modern paganism is thousands upon thousands of years old. Real witches have oaths and and rules and magical superpowers. The evil, evil Christians killed 9 million real witches. There was a great rooting out of people's Books of Shadows, so we had to disguise our magical tools and powers from the local Inquisitioner. And all the rest that goes along with that.

I mean, at some point, I feel like we should get a camera crew and do a Xena/Hercules style TV show filmed on New Zealand about the real witches avoiding the wicked, but conveniently stupid, town Witch Hunter. It'd be great! Unfortunately, it would probably just cement these ideas for some.

But, I write this today to ask your opinion on Silver Ravenwolf. Like her, dislike her, or feel indifferent, I want to know. And, I want to know WHY you dislike her. Is it because she's shiny, sells plastic 'magic' kits, and makes more money than most pagan authors off of her brand? Or, is it her message? Or, is it something else?

Le me know in the comments section below. I'd love to see a discussion form on the matter.