The Gods of the Bargain Bin smiled upon me this summer. I had been reading some heady books on the education system - which will be reviewed on the show at some point - and about various sociology topics, and I finally had to say, "Me need fantasy. Me need brain break."


My inner Grog, the Caveman, was coming out big time. 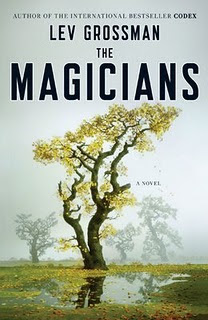 in hardback on their bargain shelf for $5. After reading the words "Harry Potter for adults" on dozens of reviews online (ain't smart phones grand?), I paid for it gladly.

Let me first say that this is Harry Potter for adults only in the sense that there is a boy who goes to a school for magic. If I were to be a bit more honest, the school - Brakebills - resembles Hogwarts about as much as I resemble Brad Pitt. In a very, very good way. (Not me, the school.) The school reminded me of the wizard's school in the Earthsea

novels by Ursula K. Le Guin much more than Hogwarts, as the magic is hard to do. It is a combination of often painful hand gestures, learning and perfecting of dozens of languages, and the magic is overall really hard to do. In fact, they say multiple times that there are some who go to the school (that only lets in 20 students per year, making it more exclusive than any institution on the planet) who never really get the hang of magic.

Just like the Le Guin series, the protagonist - Quentin - is a damaged boy. Despite the learning of magic and gaining of love and friendship, he remains pretty damaged. The wave of a wand and the touch of a magic school doesn't quite remove the stain of his internal struggle, and it makes him all the more human. Though, to be fair, there are a few occasions where the author's insistence on making him so fallible is unnecessary and irritating.

Something you should know about the story is that, unlike his compatriots of the genre, Grossman begins this series with Quentin being 18. Brakebills is a college, not a prep school. As such, he goes through many of the things that sheltered, nerdy kids go through in college: sexual discovery, getting a mildly jaded view of life far too early, etc. So, yes, there is sex. There is sex by humans, sex by humans that have been turned into animals, boy/boy sex, boy/girl sex, sexy sex, inappropriate sex, and sometimes sex because the author seemed to want to throw a sex scene in the book. Now, it's not graphic, but he does mention it quite a lot in the last half of the book.

The book borrows heavily from Harry Potter, Le Guin, (other magic school-based, coming-of-age novels), and The Chronicles of Narnia. In fact, there were a number of scenes and characters that were quite literally ripped out of the pages of those books - sometimes to a point where I was wondering if he would be sued for copyright infringement. (Seriously, he should have just called it Narnia instead of Fillory. It was the Same. Damn. Place. Aslan isn't a lion; he's a ram. That is the only difference.)

The Magicians is well written. Grossman knows his stuff, but he should, given that he is a professional book critic. In interviews he has readily admitted pretty much stealing some ideas (the cacodemon on the character's backs comes to mind), but the story is original in its own right. I have a fairly broad vocabulary, but this guy made me happy I had the Merriam-Webster app on my phone. His use of language is so verdant, and it made me love the novel all the more.

Putting it all together (my 5 Torch Breakdown):


That's 3 1/2 torches for The Magicians by Lev Grossman

. Click the link and grab it from Amazon for less than $4. The sequel is out already, and I plan on reading it just as soon as I finish the book I'm currently loving.
The book in 1 short sentence: The Magicians is a fun, sexy, hedonistic mash-up of Harry Potter and Narnia that will be great, if not familiar, fun on a long weekend or anytime you want a magical brain massage.
Have YOU read The Magicians by Lev Grossman? Are you GOING TO?!
Love and Lyte,
Fire Lyte
Email Post
Labels: Book Review