The Venus of Willendorf

In honor of the fact that I finally have my own Venus of Willendorf, I thought you, my dear Rioters, might enjoy a quick and dirty rundown of the history of this prolific icon. The Venus of Willendorf, also known as the Woman of Willendorf, is an 4.3” high statuette of a female figure estimated to have been made between 24,000 and 22,000 BC. It was discovered in 1908 by archaeologist Josef Szombathy at a Paleolithic site near Willendorf, a village in Lower Austria near the city of Krems. It is carved from an oolitic limestone that is not local to the area, and tinted with red ochre.Since this figure's discovery and naming, several similar statuettes and other forms of art have been discovered. They are collectively referred to as Venus figurines, although they pre-date the mythological figure of Venus by millennia.

The apparent large size of the breasts and abdomen, and the detail
put into the vulva, have led scholars to interpret the figure as a
fertility symbol. The figure has no visible face, her head being
covered with circular horizontal bands of what might be rows of plaited hair, or a type of headdress. She was thought to be very healthy given her weight and size.

A characteristic of all the Paleolithic "Venus" figurines exhibited by the Willendorf statuette is the lack of a face, which for some, arguing that the face is a key feature in human identity, means that she is to be regarded as an anonymous sexual object rather than a person; it is her physical body and what it represents that is important. Also, it may be important to note that the original Venus cannot stand on its own, but it seems to fit perfectly in one’s hand. Thus, it is believed one should hold it rather than have it stand.

This idol’s true purpose and reason for being carved has been lost to history, and it is subject to much debate on the part of scholars around the world. Neo-Pagans revere the idol, and others like it, as symbols of The Goddess. In fact, she is revered as a symbol of The Mother Goddess, as she reflects ancient Greek and Roman depictions of mother deities who gave birth to the primordial gods. The problem with saying whether or not this carving represents a universally worshipped deity or merely a carving of a woman lies, as with much of ancient history, in the lack of knowledge one way or the other.

Either way, it must be noted that symbols transform their meanings over time, and today the Venus of Willendorf is regarded the world over as yet another face - though she is faceless - of the Goddess. 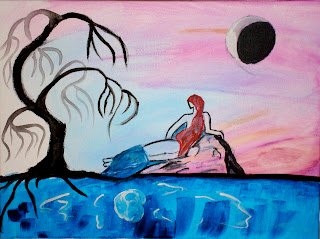 In honor of my recent purchase, my own Venus painting, She who rests on water, has been reduced to $30! This is a great time to get yourself an original painting, and to enter the new swag contest! So, hey, you could both get a piece of art AND win a book! (And, you know, it doesn't hurt that you're helping with the upcoming Podbean fees.)