When we build a fence...

“The people that want big fences and guns, sure, we could secure the border,” the congressman noted. “A barbed wire fence with machine guns, that would do the trick. I don’t believe that is what America is all about. Every time you think about this toughness on the border and ID cards and REAL IDs, think it’s a penalty against the American people too. I think this fence business is designed and may well be used against us and keep us in. In economic turmoil, the people want to leave with their capital and there’s capital controls and there’s people controls. Every time you think about the fence, think about the fences being used against us, keeping us in.”


What an interesting, albeit probably ludicrous, idea. But, there's a greater moral lesson here. If we build a fence to keep those we don't like out of our lives, then we are also limiting ourselves to the confines of the fence. Sure, when that fence is the size of our pretty big country, it doesn't seem like a bad deal. We can still go see Yosemite and Disneyland and eat Maine lobster and hike the Rocky Mountains and stand on the Four Corners and such. Yes, our fence is pretty big...but what if it wasn't?

Somebody brought this blog post to my attention from a Catholic woman named Stacy Trasancos who runs the blog 'Accepting Abundance'. The post is from August, and I'm actually shocked that it's still on the internet, given how much vile response she's received. (There are dozens of folks who have called for her death and a few who have threatened her children. All wholly deplorable comments.)

The post describes her increasing agoraphobia - her fear of leaving the house - because she lives in Massachusetts. Where gay marriage is legal. And, thusly, there are gay people...everywhere. At least, in her eyes. She says she and her family have only filled their car with gas twice this summer because they just don't want to go out in public anymore. She's afraid her children will ask questions about the gay folks. She doesn't want to see, what she considers to be, immoral behavior flaunted in front of her small children. 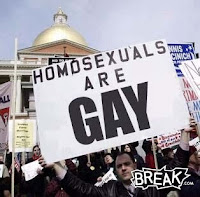 I agree. I don't want to see immoral behavior flaunted in front of my children. (Himalayan whistle children, granted, but still. Bonus points if you get the reference.) I don't want them to see rape or murder or robbery or violence or watch someone shoot up heroine (which she says is the same thing as being gay) or be forced to watch the torture of animals. I want my children growing up believing the world is a place ripe with love and opportunity.

Stacy and her family should not be the subject of ridicule. Not by a long shot. She and her family have every single right in the world to express their utter fear and loathing of a certain set of the population. Hey, I know from experiencing fear and loathing. (Eh, Anonymous commenters?) It is their right as American citizens to stand up for what they believe, to vote for the candidates and laws they want imposed, and to hope that the democratic process we all signed up for works in their favor. Unfortunately, our due process system in Massachusetts has allowed something to happen she doesn't want: Massachusetts is Gay Mecca. Or, it was. I think Portland might be now, possibly Boystown in Chicago. San Francisco? Anyways... Not the point.

The point is that it is 2011. There are a lot of very seriously disturbing things in the world today. Google is a great example of one of those disturbing things. For example: if you type in the name of one of our Republican presidential candidates, you get completely different information than what you were expecting. Try searching the word 'Hands' and hope nobody links it with the title 'Mr.' Any one of her 7 children can and will at some point be exposed to some part of society that goes against their religious beliefs.

What do you do? Do you hide from it, or do you learn to walk past it so that you can continue living your life? A similar, newer article also has me wondering about fence-building. A group of LGBT(QIPMSFRD....whatever the acronym is now) students at the University of Iowa want an all gay dorm floor. Why? Well, because...apparently that's the answer. Because they want it. From what I can read in the articles, the GLBT campus group sponsoring the idea really has no basis for wanting a floor of their own. There isn't some rash of gay-bashing on their campus, nor is there an overwhelming call from the student body for a floor like this to exist. When they had sign-ups for the floor, only 10 people did so. They needed 50.

But, why? Why the separation? I'll admit, as a freshman in college who was just experiencing all the joys of sex, knowing where all the openly gay guys were would have been neat. Though, I can easily see this backfiring. Creating a gay ghetto leads to a desensitization that the rest of the world isn't as kind and loving as the folks on your floor. Having a gay floor might be cool for those of us that have every season of Queer as Folk on DVD, but what about for everyone else? The nicknames that would ensue - heck, I can think of a dozen, and I am gay! The ostracization that could occur. The fear that some fundamentalist, unstable nutjob can just come in and open fire in the hallway and kill upwards of 50 GLBT and GLBT-friendly people.

When you fence others out, you're boxing yourself in.

Should our safety come from creating like-minded ghettos of yore, forced into close quarters because you cannot stand to be around someone with the wrong eye color or religious persuasion? I believe our safety, our rock - no matter one's religious belief - comes from knowledge. Educate yourself. There is a large and dangerously trigger-happy segment of the population that firmly believes Islam is a violent cult bent on the destruction of good, white American Christians. There are large portions of the population that believe being gay and being a pedophile are the same thing. There are people that believe being pagan means you worship the devil.

Knowledge is the most powerful thing in the world. I consider myself to be a fairly smart guy. I know enough about the world to know I don't know very much at all about most things. I have to research. It's a time + effort = the need for more time and effort kind of thing. Much of this goes back to the cliche that people fear what they do not know, but it is possibly the most true thing one can say in sociology. In-group/Out-group dynamics. Fear of the unknown. How we act and interact and react are all based on a fear of the other.

There are pretty fences all around us. The pagan fence built of pagan news and pagan information and pagan friends and pagan shops and 24/7 pagan loops of pagan-ness are the same as the extreme conservative who thinks that Fox News is Gospel and the Gospel is the news. It's a fence.

I wonder, though. It's been so long that we've been building these fences, and there are so many of them now... What does the world outside the fence look like? Is it a post-Apocalyptic nightmarescape in which the undead homosexual fervently seeks straight brains? Is it the bright and sunny construct at the end of the Matrix trilogy? Is it empty, white space? We so rarely have any interest in opening the gate - hey, by the way, there's a gate - and going outside that we forgot we have the option.

What is your fence, and what are you doing to tear it down?