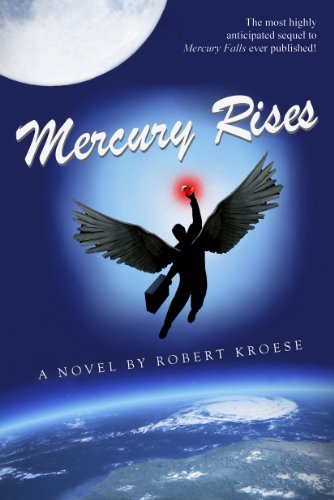 Rarely do I get as excited about a book or an author as I have in recently reading Mercury Rises by Robert Kroese. My favorite type of book is the kind that is both hysterically funny and somehow still deals with big questions and big answers in a way that takes nothing from their importance. Kroese's sequel to his first book - Mercury Falls - is just that story.

From the first chapter I was reminded of Lamb: the Gospel According to Biff (Christ's childhood pal) by Christopher Moore. It is sarcastic, irreverent, and full of heart.

Imagine, if you will, that Heaven isn't so much a resting place for the valorous or the saved, but more like the local DMV. There are long lines and elevators and Briefcases containing Important Papers that need to be pushed...importantly. Angels aren't really sitting on clouds playing harps or saving old women from burning buildings in the guise of hunky firemen. They're making sure that form 10-52 is filed with the Apocalypse Bureau's Chief Auditor while making sure it's stamped by the Weather Deparment's secretary of accounting and signed off on by someone in the High Office of Really Important Secrets. It's a bureaucracy, which is wonderful and appropriate, given how much of the world has turned spiritual belief into a governing system.

There are several characters throughout the book, each taking up equal time. There is the eponymous Mercury, an angel whose destiny seems to be far greater than what he'd like - and what he would like seems to be an eternity of snide joking and half-ass job performance. Christine, the human who characterizes the best of humanity. The good guys, the bad guys, and some interesting guys who don't seem to pick a side. And that's what I loved about this book.

This is a story that defies the convention of good v. evil. It scoffs at the idea that angels are good, demons are bad, and humans are the Greatest Creation ever. It's as much an adventure is it is a coming of age story, even though that age might be 6,000.

Kroese - a church deacon and honer of badass irony - has melded ideas of the human condition, asking the big questions (Who are we? Why are we here? Why are there no girl angels?), and whether the Harry Potter books Charlie Nyx books might possibly be bringing about the end of the world into a delightful read.

I was lucky enough to have read this book before it hits shelves later this month, but I assure you that you'll most definitely want to hit your local bookstore or click on to Amazon on October 18. You'll be looking at $15 for a paperback or just $8 for an e-book.

Critics seem to love this book, but that means little to me. However, I have to say, this book is abso-friggin-lutely a 5 torcher from this Rioter.