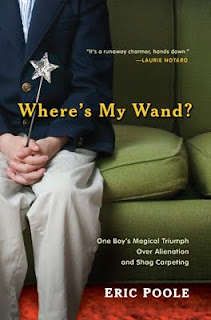 If ever there were a book that described my life in excruciating detail, it is Where's My Wand? by Eric Poole. I discovered it at one of the final days of the Border's going out of business sale, a sale I was both delighted by and quite despondent over, but didn't open the cover until this week. The only reason it took me 3 days to read the book is because I realized after the first night of reading I had finished almost 3/5 of the book and wanted to slow down to savor the moment.

Growing up, I did a number of academically inclined speaking contests. One of which included literary readings - poetry, specifically. Meaning that I have a deep and almost disgusting love of the written word, of stories, of Story, and of the guts it takes to tell yours. But, the best stories, the ones that stay with me, are the ones where you get to the end and you realize you have tears in your eyes. You're not sure how long they've been there, and you can't say for sure whether it was from laughing so hard you almost vomited or because Chapter 11 punched you right in the gut.

Where's My Wand? is a book just exactly like that.

It is the story of Eric Poole, a guy you haven't heard of, but whom, if you were anything like me growing up, you will fall deeply in love. The book starts when Poole is a child, a future gay growing up in a time when Bewitched was putting out new episodes and shag carpeting had to be raked. Although he is, naturally, quite fabulous, the other kids at school don't seem to quite glom on to the sheer fierceness of his personality. Thus, of course, he takes matters into his own hands with a little help from Endora. Yes, as in Bewitched.

See, as a child, Eric believed in magic, that magic worked just like he saw it on TV. Therefore, he employed it in his everyday life by donning a bedspread in his basement, waving his arms, and visualizing the change he wanted. (Sound familiar, robed pagan folk?) First, he absolutely believes that every single magical act results in perfectly carried out magical wishes, but as he gets older, and the things he uses his magic for become bigger, he realizes the world might be a little more real than he'd originally been led to believe by primetime programming.

The book is poignant without being preachy, gut-bustingly funny without being crass, and makes you want to call up your buddy from middle school. You know, the one that Facebooked you 2 years ago because Facebook said you two might know each other because you went to the same school 17 years ago and thus must still be interested in the same exact things, and, you know...talk about New Kids on the Block and how awesome it is not to have braces anymore.

It is nostalgic, opulent, and gracious, and made be believe - not that it had waned - even more in magic.

Please remember that all month is the Riot-O-Thon! If you have either the ability or the spare change, please donate $1, $5, or whatever you can until October 31. It helps keep the site ad-free, the podcast uninterrupted, the swag coming, and will hopefully allow me to make a few upgrades to software and even pay it forward to some wonderful charities. As a thank you, I have a wonderful selection of swag that several of you can win, include a truly Riotous grand prize package. Special thanks to this month's sponsor: Eliora! Visit her Etsy shop & Facebook page to get some gorgeous and magical decor for your altar or...garden shed or something. Thank you for sticking with the Riot the past two years!
Email Post
Labels: Book Review