Hello! Goodbye! (And where we go from here) 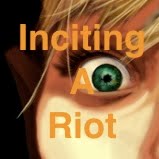 Two years ago today, I uploaded a little thing called Inciting An Inaugural Riot. It was 17 minutes long. It was horribly edited. Its word of the day was 'inhere.' It was the first episode in what would become one of the most inciting new pagan podcasts on the interwebs. The show - and, by extension, me - has never been the most liked or the most listened to, but I dare say that it has been one of the most interesting.

I began listening to podcasts around 2007, in the time the Wigglian Way was just finding its wiggle and deo was becoming a Shadow of our podling past. While every show is unique, and while - since then - there have been dozens of shows start up, get going, and burn out, there have been a few that have stuck around. Why? Well, a lot of reasons. Some people don't know when to shut up. (Hey, this isn't a paid gig, and anybody with an internet connection, some free software, and a mic can podcast to their heart's content.) Some people enjoy it as a periodic hobby. And others...well...they see it as the new media.  A new voice for the community.

Those are the ones that hang around.


You see, the best statistics tell us that pagans in America and abroad number in the single digit millions. Possibly something like 1.5-2 million folks are "pagan", or "neopagan" to be precise, on the entire planet. In the United States, that number is somewhere in the 600k-800k range. That's a lot of people, and that's not a lot of people. Comparatively speaking, we're a drop in the ocean of world religion.

Because we're so small, some people go weeks...months...sometimes years, possibly their entire lifetime without finding a fulfilling pagan community to join. You may live in a state that doesn't have a single witchy shop. You may live in a town where you are the one and only person that doesn't think a pentacle is the currency of Satan. Or, who knows, maybe you're lucky, and you've got a lively bunch of 20-30 witches, warlocks, and Flying Noodle Kebobs surrounding you in love, light, and sprinkles every weekend.

Blogs are nice. (I love doing this one.) But, there's something about hearing a voice. There is a connecting power that takes over when you listen to someone else's journey. When you find out that you're not the only person that stutters when saying the phrase "benefit of the doubt" (yes, I have to edit that every single freaking time I say it...ask Velma). Pagan podcasts are the product of a need that few other communities have. We in this pagan/neopagan community need to connect, because we can feel so very, very alone at times. And that's why pagan podcasting is important.

It is important that we, as podcasters, continue to put out good quality programs, because somewhere there is a guy named Jim or a woman named Susan that has no community and is scared to death to come out of the broom closet. It is important that these shows go on, because somewhere there is a teenage Selena Moondragon or a Notamuggle Thorsson trying to wade through the swamp of 101 material. It is important, because pagan podcasts are the voice - literally and figuratively - of this brave new pagan community. We are small, but we have heart, we have brains, we have will, and we even have a little dog named Kika. (But no red shoes. Those damn things get glitter everywhere.)

And we have you, the listener. The blog reader. The person absorbing the content and allowing it to affect their lives. The student that learns makes the teaching worthwhile.

In the last two years, I hope I have accomplished a few things:

And I can honestly say, from the heart of my bottom, that I would not, and could not, do this show without you. Yes you. Not the collective you. But you, reading this post or listening to my show. Without you, whether you've written in, tweeted in, Facebooked in, (Dragonvaled in) or not, YOU have kept me going when I didn't want to record or write. When I had no idea if I should even continue to pick up the torch or sharpen the pitchfork. You let me know to #RiotOn.

Now that I'm all weepy... I just want to say this.