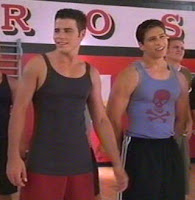 This lovely story found its way to my attention this evening. A male cheerleader at a high school in Alice, Texas was recently kicked off his school's cheer squad because he was seen in the band hall kissing another guy. After the school officials spent time scoping him out on the security camera. And, you know, you can't kiss guys in Texas and also be a cheerleader.

Because, of course, it must have been a shock to learn that the male cheerleader was gay.

I'm sorry... Why are we surprised? We've all seen Bring It On.

Here's the situation: nobody is releasing an official statement as to why the kid was kicked off his squad. He was told it was because of the kissing, but the school has not released a reason why they kicked him off the squad and suspended him for 2 days.

So... They're not saying to the public. Which, of course, means they've been caught. Red-handed. Watching tapes of their (most likely known) gay students in order to catch them in the act of kissing - which is against school policy - so that they can then punish them. I actually remember growing up in a Texas high school and having no kissing policies. It was the oddest thing. But, I can honestly say, nobody was ever suspended over it. Though, were I to have kissed a guy, I can almost guarantee you I would've been sent home.

Naturally, the question here is whether all the straight students that kiss one another on campus are also getting suspended and thrown out of their respective clubs. My guess is no. And, I'm guessing, the school board will find that none of the straight students are getting thrown out, either. Luckily for this kid he's made national headlines (Thank you MSNBC), and he'll probably be back to being the apex of the pyramid any day now. But, really, what is this saying about folks in power in our school districts. Pathetic.

Really? Watching the male cheerleader on the security camera to catch him making out? Really? This is who we are in 2011?!

And it was in the band hall. (It doesn't get any gayer in high school. Unless, of course, it were in the drama room on a stack of pom poms.) As a lovely little post script to this story, there is already one cheerleader with a baby and one that's pregnant on the team. They're still on it. You know, the bastions of morality that they are.

What do YOU think?