And now, for something that is incredibly important: Glee. 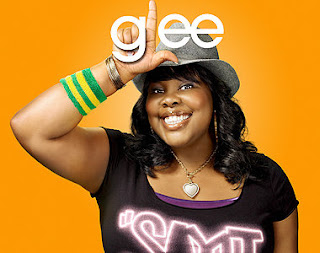 I am really loving this season of Glee. It's really gotten back to stories - shocker - about the characters. But, see, I have this issue. Lea Michele, the Barbra Streisand lookalike, who plays Rachel on the show is seen as the lead character on the show, despite the ensemble nature of the cast and the fact that most everyone on the show gets a chance for some serious storyline work and character development.

This. Girl. Can. Sing. Amber Riley - the actress who plays Mercedes - has a voice that most folks would give a body part to have. She's hilarious, sassy, and in the past has had some of the biggest standout songs on the show.

In short: Me Lovey Lovey Mercedes Much Much, and I'm forever curious as to why they're not letting her sing!

I remember that earlier this season, the character actually attempted to stand out on her own by auditioning for the lead role in the school production of West Side Story. She won it, but had to share it with...guess who!...Rachel. So, she turned it down, saying she was really sick of playing second fiddle to her, when she can sing just as good - if not much, much better - than her. Rachel even agreed that Mercedes sang better. Since then...no Mercedes. Sure, she did some duets with Santana a couple of weeks ago, but those were definitely vehicles for Santana's character, as they didn't show off Mercedes' serious vocal chops.

I want more Mercedes!!! Who's with me? #LetMercedesSing!

Though, a half naked Chord Overstreet can be seen in a promo for next week's show, which promises his return and more stories for my girl with the vehicular name.

Do YOU love Glee?

And now, we return you to your regularly scheduled Riot. Tomorrow.