Christmas Gone Wild! (The Shiitake Mushrooms are Hitting the Fan)

Watch out Rioters! That's not snow falling down just in time for Christmas! It's the annual shit storm of news stories from the conservative mediasphere!

You know how every Christmas and Halloween, there are always - completely without fail - ridiculous stories circling the web and cable news mediasphere. (That's how we get things like Jesusween replacing Halloween, etc.) Well, dear Rioters, this year is turning out to be no different than last year, or the year before that, or the millennia before that. In SAVE THE CHILDREN news: A Michigan elementary school music teacher is causing a stir, because when she handed out the lyric sheet to 'Deck the Halls' to her students, they giggled at the line "don we now our gay apparel". Instead of using it as a teaching moment, informing kids that 'gay' has multiple meanings and that it originally meant 'happy', she chose to change the lyrics to "don we now our bright apparel".

According to reports, the school's principal, Chris Parker, has expressed that he wished the teacher had used the opportunity as a teachable moment. By subtly agreeing that the word 'gay' is something negative, weird, funny, or at all something to be giggled about, the teacher is reaffirming whatever it is the kids thought.

The principal has said, "We have an anti-bullying and discrimination policy that includes sexual orientation, so going forward the teacher will be addressing, this is how we're supposed to be reacting, this is a way to be respectful about this."


I remember when I was little that this phrase was just another line in a Christmas carol. Then, as I got older and The Gay was becoming more mainstream, it became something that people giggled about, something that was funny, because "OMG! We said the word gay!" I am glad for this principal. I am also glad that parents felt the change was inappropriate, and the lyrics have been changed back. 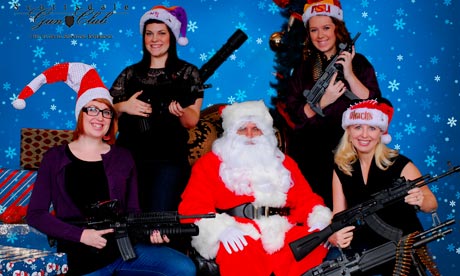 In I CAN'T BELIEVE PEOPLE DO THIS news: An Arizona gun club is offering the chance for children and families to pose with Santa...and guns. I rarely quote extensively from articles, but may I repost here from an article in The Guardian:


In another photo, Santa cradles a toddler dressed in camouflage, while a man and woman stand close by with rifles with foldable stocks. In another image, five young women pose with AR-15 and other rifles. One image shows Santa Claus in a wingback chair with a snowflake background, a Christmas tree behind him and flanked by an $80,000 machine gun and a tripod-mounted rifle. Next to Santa is a man standing behind a boy, who is holding an unloaded AR-15 with an attached grenade launcher.

Yes, nothing says Christmas like having little Timmy or Susie dressed in camo surrounded by assault rifles. I have no idea what to say to this. On the one hand, I am all for teaching your children to respect weapons, to understand their use, and for teaching one how to hunt and defend yourself if that is your choice. But, something about glorifying these things seems in excess. Also, I'm not sure that it's a good idea to allow your small child to think of guns as funny or non-serious, in the manner the photos are taken.


Call me a prude; call me anti-gun; call me whatever you want; I think this is overboard. Feel free to bring a mop to clean up my bleeding heart. While I do not personally have any desire to own a gun, I agree that they should be allowed to be legally purchased by adults that have had the proper training and certifications. I think there should be a number of restrictions, and that they should be treated with respect. Something about using assault rifles as props in a holiday picture...it just doesn't say "serious" or "treated with respect" to me. Oh well...

If you have a crazy Christmas Gone Wild story, leave it in the comments below for all to share!