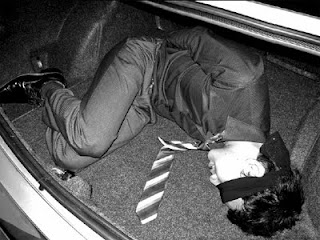 When the first line of a news story says this:

A church youth group meeting comes to a horrifying halt when men bust in blind and bound the children and throw them into a van. But it was all staged by church leaders.

Church leaders in a Pennsylvania church called Glad Tidings Assembly of God wanted to teach their youth group a lesson about religious freedom. While the details of what, exactly, the lesson on religious freedom are still sketchy, the effect of the lesson is not.
One 14-year-old who was in the youth group said the following about the incident:

'We were playing games – the lights shut off – these guys came in with bandanas – eyes covered.' At the same time, the men began screaming and yelling and waving fake guns, 'Get to the ground – and put your hands behind your back.'

That article also says that the children were bound, had pillow cases put over their heads, taken outside, and thrown into a van. A tandem article states that these children were first forced to the ground by the men with fake guns (though some have claimed that the guns were real but unloaded). Once these children were thrown into the van in the church parking lot, they were driven around and then taken to the basement of a home on church property.

The mock kidnapping - though I deign to call it that - was planned by church senior pastor John Lanza and youth group minister Andrew Jordan. Supposedly, the event had been planned since the beginning of the year, and they allege that some of the children involved knew that it might be happening. However, the church leaders admit that they did not get parents' permission before doing the event, and that they will do so when conducting this staged kidnapping in the future.

That's right. They plan on doing this again.

“We did a mock persecuted church environment,” said Lanza and was meant to teach their students what life is like as a Christian where freedom of religion is not honored.


Senior Pastor Lanza goes on to state that he believes the majority of the youth group members enjoyed the experience of being forced to the ground, bound, blinded, and driven to a strange location. One seventh-grade girl was bruised and quite traumatized by the event. Her parents say they had no idea that this was going to be happening, and the girl and her family say they will never go to church there again.  Another report states that a 14-year-old girl - possibly the same girl said to be the seventh grade girl, as no names were given for the 7th-grader - was completely caught off guard by the event and thought 'Am I going to see my family again - am I going to die?'.

I get that there are some types of lessons that hardened needs sometimes must learn through a tough love scenario. I can even academically understand the notion of programs like Scared Straight, in which very raw, scary scenarios of true life crimes and criminals are told in order to give youth an idea of the dangers of criminality. While not proven to be wholly effective, they are speeches, words said in front of groups. Nobody is taking away their liberty. And that is, at the heart, what I have an egregious problem with. These children were not really able to give informed consent to participate. They did not know - at least by current interviewed accounts - that they had the option of saying no.

And, this brings up the point for me of what would have happened if someone said they didn't want to participate. Was there any sort of code put in place by church officials, at least amongst themselves. If a child said, "Please, don't take me," would they have left them? Or would that have inconveniently interrupted the religious freedom exercise?

Police in the area say that they are aware of the event and are looking into whether any formal charges will be filed, and some parents say they may possibly pursue legal action. There are at least involuntary kidnapping and assault charges that could be raised, and given the bruises and psychological trauma reported, it would be a pretty easy case to win. At least, that's this Rioter's opinion. A video report of the incident is below.

One last thing before we move on from this topic, in the vein of mock situational events becoming too real for those involved. Situational mock events do not need to be prolonged for much time to have a very serious, very dangerous impact on participants. If you ever took any psychology, criminal justice, or sociology courses in school, you probably studied the Stanford Prison Experiment. It was an incredibly divisive, controversial experiment conducted by psychology professor Dr. Philip Zimbardo at Stanford University over a 6-day period in August of 1971. It split 24 male participants, randomly, into groups of prisoners and prison guards. Originally intended to run between 7 and 14 days, the experiment was designed to test whether someone's inherent psychological traits governed their behavior, or if environmental factors determined it.

The first day was uneventful, but by day 2 a riot began. After 36 hours, one inmate/student became so traumatized, he had to be released from the experiment. After 4 days, the situation began to get so wildly out of control that by day 6 the experiment - originally planned for 2 weeks - had to be ended. From the official Stanford Prison Experiment website, Zimbardo states:

Our planned two-week investigation into the psychology of prison life had to be ended prematurely after only six days because of what the situation was doing to the college students who participated. In only a few days, our guards became sadistic and our prisoners became depressed and showed signs of extreme stress.


If the student guards could become as violent and sadistic as they did in mere hours, and if the student inmates could become as psychologically damaged and traumatized as they did, and they were - for all intents and purposes - adult men who were deemed by a doctor of psychology to be the most mentally fit of all 75 applicants to the program...what happens when it is older men and young children playing the roles of jailer and inmate? What damage has already been done in the short time it took to bind, blind, kidnap, and frighten this group?

A 29-minute documentary of the Stanford Prison Experiment is below. I encourage you to watch, though much of it may be difficult.

There is a robotic Maroon 5 cover band. It exists. It is a real thing. And because it is so awesome and so actually real, and because the above story is so awful, I felt it urgent and necessary to share the almighty bad assedness of the existence of this Maroon 5 cover of Moves Like Jagger as performed by actual, real robots.

For more robot band covers, you can visit the bd594 YouTube page here.