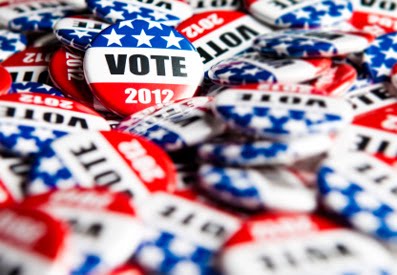 Two candidates will face off tomorrow. Well, technically more than two candidates. I know in Illinois, we had 4 candidates for President on the ballot. But, sadly (in my opinion), there are really only two candidates that have a shot at winning. Two major parties. Two sets of wildly differing views. So, where will you be in all of this?

In America, the range of voter turnout (aka: how many people actually vote) is somewhere between 40 and 55% of the population. It is higher in general election years, or years when we vote on who gets to be President. It's lower when you're just voting for things like your House Representative. Either way you slice it, a huge chunk of the population doesn't vote. They don't vote for a number of reasons. They don't like either candidate. They don't know enough about the candidates. They don't feel they have time. They have a general disdain for politics and the political process, generally. The list goes on.

It seems as though each Presidential election cycle is billed as "the most important election of our lifetime." I distinctly remember being told by talking heads, members of my own family, and folks all around the interwebs that the 2008 election was the most important of my lifetime. That the fate of our country hung in the balance between Obama and McCain. I was told the same thing in 2004, when I was a freshman in college; Bush v. Kerry. (I finally through my Students for Kerry t-shirt away this past year when it had finally surpassed its usefulness and had become a veritable dish rag.)

Tomorrow, once again, is being billed as the most important election of my lifetime. I'm told if one candidate is elected, the country will likely crack off from the continent and fly off into space, heading directly for the sun. That's a mild exaggeration. But, I'm led to believe, by the aforementioned talking heads and family members and interwebs folks, that if one candidate is elected, life will be so freaking peachy, I'm going to have to take pills to keep from being overstimulated by the awesomeness that our country will become. Again, only a mild exaggeration. I'm also told that if the other candidate is elected, my life, my liberty, my pursuit of happiness are all in jeopardy.

Who each of those candidates is seems to depend on which television station I'm watching, which set of family members I'm speaking with, and which folks on the interwebs I'm listening to or reading. I'd like to propose some truth:

There is no perfect candidate.

Life will not come up roses, no matter who gets elected tomorrow.

Every politician has lied, is lying, and will lie again.

Likewise, every human has lied, does lie, and will lie again.

No candidate can possibly be all things to all people.

No matter who wins tomorrow, a very large section of the population (somewhere in the 50% (or over 150 million people) will be very upset tomorrow.

I need to stress that these fears are legitimate. People are not flippantly afraid. They have been told, taught, conditioned by Fox News, MSNBC, the Drudge Report, Rush Limbaugh, Michael Moore, and a host of folks on all sides of every issue that one candidate or the other is evil. That is wrong. Both candidates got to where they are because they had some good ideas. They believe they can help make the country better.

They each, equally, believe they can make the country better.

They each, equally, want to make the country better.

I believe with my whole heart that both Mitt Romney and Barack Obama want to be President of the United States because they believe they are the best man for the job.

Now... That doesn't mean I don't believe there is one person better suited for the position than the other, but that's my opinion. That's my one vote.

For many people "who is better suited for the job" might be down to a single issue. Marriage equality. Women's reproductive health. Foreign policy in the Middle East. Support for auto workers. Business experience. Economic policy. Medical coverage. Foreign aide to developing nations. The environment. Supporting police. Supporting teachers. Support the unemployed. Supporting the middle class.

The issues are endless, and each person has a set of pet issues unique to them. Other voters have been watching every debate, reading every article, laughing at every gaffe, and are fully versed on where each candidate stands on every single issue. Many folks lie somewhere in the middle. Some will go to the polls barely knowing the candidates names.

But here is my plea.

Nothing gets better until we decide it gets better. Nothing changes unless we decide to change it. I, honestly, do not care if you wholeheartedly support Obama or Romney - as each man has his strengths - but I do care that you make your voice heard.

I read a wonderful quote the other day. It went something like, "If 99% of people voted, it wouldn't matter what the 1% think." Just imagine what might happen, what kind of change we could create, if 75% of the population voted. 90%? 100%? What would happen if people decided to vote a fantastic libertarian or Green Party candidate in via write-in? It could happen. It's in your reach! But you must take it. You must decide that voting is worth it.

There are some quality, non-partisan resources out there to help you get informed and get to the right polling place:

VoteSmart.org is a non-partisan look at candidates and their views.

The US Elections Assistance Commission is about getting you registered, confirming where you're supposed to vote, and making sure that you have everything you need to make your voice heard.

NFIB.com has some resources such as issues briefs (telling you what each issue is and how the politicans in question have voted on that issue). They also have score cards on how candidates have voted and what they've said regarding many key issues. These can be printed and taken with you to study.

Google is also a great place to start. Search "voting resources [my state]" for dozens of sources. You can even search for "polling place [my address]" and it will typically take you directly to the address of where your county's elections are held.

I'll be watching tomorrow intently. Hope to see you at the polls.