It's been almost exactly a month since I wrote a blog post. No reason in particular except... I finally, FINALLY bought a new computer! (Feel that jealousy sink in.) It was so horribly slow, and I just didn't want to take the time to write on it. While my iPad will do in a pinch, I have too many pages and links and such open when I blog that I just never ended up doing so. I changed jobs and have been quite engrossed in that move. Then there was that week my parents were in from Texas...which turned into the 2 weeks that Partner's mom was here...is here, actually. Upstairs. Making something that I hope wasn't once the stomach of something else...or the brains... At least it's not meatloaf.

For whatever the reason, Happy St. Patrick's Day! In all the hilarious sharing that goes on in the social media sphere on a day like today, I found a new web comic to love called Happle Tea. It is described as 'a webcomic about mythology and other things.' I've only just started on the back catalogue, which extends to 2009, but I'm in love. Instantly. I rarely love webcomics, because there's so much that goes into loving a webcomic... You know...all that physical labor involved when you love something that is found on a website... Some examples of the goodness that intrigued me:

Click on over to HappleTea.com and enjoy the goodness of Scott Maynard. Here's one last strip, one of my new favorites from his early catalogue: 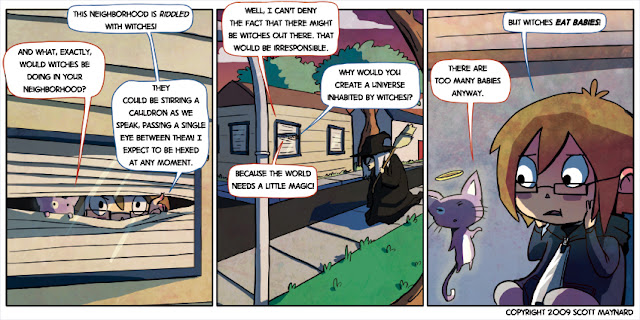 In case you haven't heard, the webcomic Oh My Gods! is coming out with an omnibus. OMGs! (The pagan based comic strip for the polytheistic masses.) has always been one of my favorites, and I was so sad when it vanished several years ago. But, the creator, Shivian, has put it all together in a two volume set. Here's the sitch: the hardcover, all together, will set you back $200. I know. It's a lot. Honestly, I'd love to put it on my bookshelf, but I can't think of anything I've spent $200 on that didn't end in a horizontal dance of love. Since I'm not a lover of paper cuts in areas where paper cuts should never, ever be...I'll unfortunately have to pass on the big, bad volume of awesomeness for myself.

Shivian has also made the entire omnibus available for under $20 in eBook format!! (ALL THE EXCLAMATION MARKS!!!!!!!!!) If you're like me and prefer an ereader to an ever-expanding library of books you apparently bought but neither intend to read nor can remember having actually paid hard earned cash for, then you're in luck! Via lulu, each of the two volumes is available for $9.95.

Seriously, you won't regret it. If you've never read OMGs, or if, like me, you've loved them for years, they'll be an invaluable addition to your library. Most fun of all, you can keep the LOLs going for years. And, Shivian has assured his fans that all of the spelling and grammar mistakes you've grown to love/hate have been kept in tact for the print/eBook edition.

What's YOUR favorite webcomic?! Share in the comments below!