Skip to main content
Labels
Posted by Fire Lyte May 04, 2013

My Beltane (Or: Earning my 'Dirt-worshipper' Title)


Beltane happened this week. And, here in Chicagoland's south suburbs, it was a phenomenally beautiful day. The weather hit the low 80s; there was not a cloud in the sky, and I could not fathom any reason whatsoever to stay indoors. Funny, when I was a kid, I would stay inside on bright, sunny days in Texas - as bright, sunny days seem to plague Texas, which sounds nice, except for that whole lack of rain and 6 months of 100+ degree weather. No, here in Chicago, a beautiful day of sunshine is to be celebrated with being outdoors. So, what did I do? I dug in the dirt.


Admittedly, while I attempt a garden every year in my backyard, it is a pretty half-assed attempt. I've done container gardens since we arrived in 2009, which is fine, but they're not really ideal for herbs and veggies, the things I prefer to grow. Flowers are nice and all, but I like to stock up on both culinary and witchy plants, and the idea of making them myself has always appealed to me. Most herbs that I want to keep around - basil, rosemary, lavender - do quite well in Texas. The dirt is fertile, but the temperatures are warm with lots of sun. If I keep them well-watered and provide enough shade so that they don't wither in mid-July, I can keep most herbs all year.

But, I'm not in Texas anymore, and I've never really mastered the Illinois growing season. Just when I think I've got it down and I decide something crazy like planting rosemary and basil in a pot outside in, oh, mid-April, here comes the blizzard of the century. So, finally, I waited. I was told to wait until around Mother's Day to plant. Mother's Day. I ask you. That's mid-May! That gives me maybe 2-3 months to "be a gardener".

Instead, I bucked the system and said Wait til Beltane! It paid off. Did I mention the gorgeous day? So, I went to Home Depot, using a lovely gift card from my mother - a Valentine's Day present - and went a little crazy. I got a raspberry vine that is supposedly self-pollinating, a hanging basket with strawberries, a habanero pepper, jalapeño pepper, 2 Roma tomato plants, 2 rosemary, 2 basil, and 2 sage. I already plan to add some cilantro plants and probably another of each of the peppers so that I can make salsa directly out of my garden.

But, here's the kicker: I actually put it all IN THE GROUND! I weeded a section of my back yard, which looked a whole lot like this before I started: 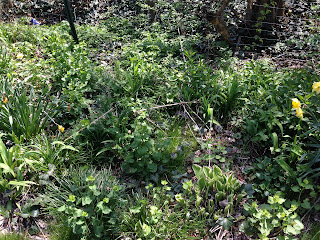 Overgrown with various flora that were not bad plants, mind you, but plants getting in the way of me feeling all gardeny. So, they had to go. Before you ask, yes, the daffodils and other bulb plants were saved. They were each dug up and transplanted to an equally overgrown area behind my shed. So, there's that. A little over an hour after I'd begun, my little patch looked something like this: 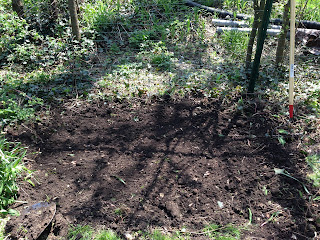 Dirt. Fertile, black, Illinois dirt. Rich and pretty odorous. Smelled like things would grow in it, as evidenced by the amount of plants I had to remove to get to said dirt. After I accomplished this, and drank a nice cold glass of water, I set about putting the plants in the actual ground. Now, I must say, I had no plan, and this was my first time...so you can't laugh about how haphazardly they're planted. Seriously, don't laugh. Ok...you can laugh a little.

But first... A bit of the spirituality of gardening, and the big impetus for why I finally decided to put plants in the ground where they belong.

At Ostara every year we decorate eggs with images and words describing our wishes for the coming year. Prosperity, joy, love, etc. These are typically the wishes of most people when making wishes. And, they're typically ours. Except for this year. This was the year where Partner and I decided that we were going to get all specific on the Universe's butt. (Yeah, that didn't come out the way I'd hoped either, but it's there in black and white and I'm not deleting it.)

This year Partner wished for some pretty specific things in his career, literally writing out the words on the egg rather than drawing a pretty pretty picture. I did the same. I wished for a closer connection to deity. To fall back in love with my spirituality and to truly find a way to believe wholeheartedly and fully of spirit in the Divine, in magic, in the realm of spirits and Other Beings. To hear the flap of faery wings. To smell the perfume of a spirit as she wanders. To see God/dess/SUPERIOR BEING's hand in creation and to stop doubting. I felt that this merited action.

And, yes, typically these egg wishes get buried in the back yard...in a pretty unceremonial hole in the ground. But, something urged me this year to let the wishes grow something, to literally let them feed the earth, to be the food for my magic and my belly, and to ingest that fertile, verdant spell.

I used my pestle to mush the eggs up and put a bit in each of the holes. So, a bit of each wish will become food for each plant, which will, in turn, become food and magic for me - with the exception o the strawberries, as they were already in a hanging basket and didn't need my assistance. After all was said and done, here was my garden! 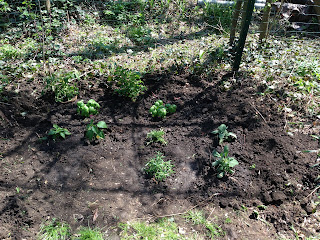 I'm all proud and stuff. Annnnnd now a different angle: 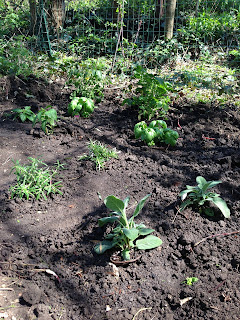 It felt good, too, the digging. It didn't take long for me to ditch the spade all together and use my fingers to dig out the holes and fill in the holes. That tiny bit of connection brought me a feeling of closeness with my surroundings. I've not felt as connected with nature here as I probably should. Spent time in it on nature trails for exercise, yes, but not so much getting to know it.

Baby steps and all that, but I'm excited to see what the summer will bring.

How was YOUR Beltane? Do you have any gardening plans or pictures? Feel free to share your thoughts, links, and pictures in the comments below!