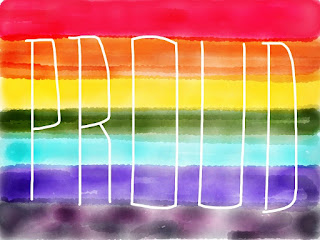 This morning, to the surprise of absolutely nobody that's followed the cases, DOMA and California's Proposition 8 were repealed.

A quick rundown of what each of these laws was and what they did:

DOMA, signed by President Bill Clinton in 1996, prevented same-sex couples whose marriages were recognized by their home state from receiving the hundreds of benefits available to other married couples under federal law.

Proposition 8 was a California ballot proposition and a state constitutional amendment passed in the November 2008 state elections. The measure added a new provision, Section 7.5 of the Declaration of Rights, to the California Constitution, which provides that "only marriage between a man and a woman is valid or recognized in California."

In plain English, Prop 8 halted gay marriage rights in California - overturning an earlier court ruling which allowed for the right - and DOMA halted equal marriage recognition at the federal level. So, if I were in Maine and I got gay married, I still couldn't get federal recognition (ie. file joint federal tax returns, etc.) despite the fact that my state legally allowed me to marry. Also, since there was no federal recognition, intercontinental couples would not be allowed the rights of straight couples, namely to obtain a green card for your foreign born spouse. (For a highly emotional video on the matter, watch this:)

The federal Defense of Marriage Act defines “marriage,” for purposes of over a thousand federal laws and programs, as a union between a man and a woman only. Today the Court ruled, by a vote of five to four, in an opinion by Justice Kennedy, that the law is unconstitutional. The Court explained that the states have long had the responsibility of regulating and defining marriage, and some states have opted to allow same-sex couples to marry to give them the protection and dignity associated with marriage. By denying recognition to same-sex couples who are legally married, federal law discriminates against them to express disapproval of state-sanctioned same-sex marriage. This decision means that same-sex couples who are legally married must now be treated the same under federal law as married opposite-sex couples.

So, if you're in one of the thirteen states that currently recognize same sex marriage - California, Connecticut, Delaware, Iowa, Maine, Maryland, Massachusetts, Minnesota, New Hampshire, New York, Rhode Island, Vermont, and Washington - then you're now given the full legal standing of every other married couple in the United States. You can file your taxes jointly, get a green card, etc. etc.

As for the overturning of Prop. 8, that case was known as Hollingsworth v. Perry. (Hollingsworth being Dennis Hollingsworth, a California State Senator opposed to gay marriage, and Perry being Kristin Perry - and her partner Sandra Stier - who was denied a marriage license and then joined a growing number of lawsuits challenging Prop 8.) The US Supreme Court found that supporters of Prop 8 did not have the legal standing to appeal the lower court's original ruling that gay marriage was legal, which will allow same-sex marriage to resume in California. From SCOTUSblog:


The challenge to the constitutionality of California’s Proposition 8, which bans same-sex marriage: After the two same-sex couples filed their challenge to Proposition 8 in federal court in California, the California government officials who would normally have defended the law in court, declined to do so. So the proponents of Proposition 8 stepped in to defend the law, and the California Supreme Court (in response to a request by the lower court) ruled that they could do so under state law. But today the Supreme Court held that the proponents do not have the legal right to defend the law in court. As a result, it held, the decision by the U.S. Court of Appeals for the Ninth Circuit, the intermediate appellate court, has no legal force, and it sent the case back to that court with instructions for it to dismiss the case.

Let's all take a moment and do a happy dance.

Now to be the heavy. Let's all calm down. The rulings today were fantastic for gay marriage equality. They are huge steps in the right direction, and, the DOMA ruling especially, helped to remove some stumbling blocks in the path of nationwide marriage equality. But, let's not forget a few key issues. Firstly, there are 13 states with legally recognized gay marriage. That means there are 37 states where it is still illegal for two tax-paying adults to get married, regardless of gender. Also, I'd like to remind everyone of one more incredibly sobering reality...


See this map? This map is a list of states that have written into their state constitutions a ban on same-sex marriage. So, you might live in a state like Massachusetts where gay marriage is legal, but if you move to a state like Texas or Florida or Louisiana or Kansas or Wisconsin - the list goes on - you're not married anymore. DOMA's disappearance means that if you live in a state where your marriage is legally recognized, then the federal government will recognize it. But, if you live in a state that does not recognize your marriage, then poof...it's as though it never happened. And, a constitutional ban isn't a simple thing to overcome. Though it can vary from state to state, basically you would need an overwhelming majority of the population (usually around 2/3) to overturn and re-amend the state constitution. In most of these states, we're still possibly a decade or more away from that happening.

So, out of those 37 states where gay marriage isn't recognized, THIRTY TWO STATES ban it in their constitution. Ok... To be fair, it's 31 and Hawaii grants its legislature the right to ban same-sex marriage.

Now, if someone at the federal level would like to write a federal law allowing same-sex marriage, then the Supremacy Clause of the United States goes into effect. It says that federal law overrules state law.

Article VI, Clause 2 of the United States Constitution, known as the Supremacy Clause, establishes the U.S. Constitution, federal statutes, and U.S. Treaties as "the supreme law of the land." The text provides that these are the highest form of law in the U.S. legal system, and mandates that all state judges must follow federal law when a conflict arises between federal law and either the state constitution or state law of any state.

So, that's the hope. We're hoping that our federal government will get a majority of its House and Senate to enact a federal law giving sweeping marriage equality nationwide. DOMA doesn't give us that. Prop 8 doesn't give us that. And there isn't anything in the United States Constitution to challenge in a judicial setting. It is possible that the President could give an Executive Order attempting to force the issue, but this would likely get overturned in Congress, since it's been found in the past that an Executive Order cannot be used to create law, but rather to clarify or enforce current law.

Though, in this Rioter's opinion, if an Executive Order can be used to go to war, it should be able to be used to give equal marriage rights. But, it's not like the President doesn't have enough on his plate right now.

And that's where we stand, folks. There is a lot to celebrate today, but the war is nowhere close to over. And, for folks like me in states where gay marriage still isn't recognized, today is just another day. I can't rush out and marry my Partner. I can't file my 2013 tax return jointly. I can't receive one of the over 1000 legal rights only married couples receive. I'm just Partner's roommate for most legal purposes.