The Tricky Tightrope of Familial Acceptance

About a week ago, I was asked for advice by a Rioter. She recently got married to her partner, and is having a tough time navigating her family's feelings on the matter. Here's her question to me:

Your parents aren't very accepting of the fact that you are gay, am I right? I believe I remember you talking about it on the show... My dad refused to have anything to do with my wedding. My mother came before the wedding with a gift but he wouldn't allow her to attend the ceremony... Every time I reach a state of resolve with my father he pulls something like this... How does one move past that sort of thing and just be ok with their close-mindedness? It's so hard...

You're absolutely right, dear Rioter (whose name shall be stricken from this response to further protect anonymity), it is very hard.  I've been with Partner for over 7 years now, and there are still parts of our relationship that I don't speak with my parents about. (My apologies to prepositions everywhere for that last sentence, but I'm too lazy to fix it.)

Some background, before I respond: Your first question to me, as to whether my parents accept my being gay, is an interesting one. Do they accept that this is the way I am and that I'm probably not going to leave Partner and get hitched to the nearest baby-making, vagina-having female I can find? Yes. They accept that's the way my cookie crumbles. They understand that to be a truth of the world that they are not going to change. But that question has a load of connotations and implied meanings. Such as:

Herein is the tricky tightrope of familial acceptance.
There used to be a television show called Queer As Folk. It's been off the air since 2005, but it's still quite good, quite relevant, and worth a rewatch if you have access to the DVDs. When it was out, the mantra from many gay youth I knew was "I wish I had Michael's mom for my mother." Michael's mother, Debbie, was the quintessential 'best case scenario' for what it means for a parent to "accept" their gay child. So much so that there's an iconic scene where Michael says his mother is too accepting, pushes him to be too gay sometimes. She's the PFLAG button-wearing, dildo-joke-making, loud, brash, tiger mama mother every gay boy wishes he had. And, I feel like that's the standard for what people mean when they ask "Do your parents accept you being gay?". In truth, I've yet to meet a mother who was that supportive. The mother who never once wished their son was straight, never once questioned whether it was just a phase, never hesitated to start a local PFLAG chapter, never blinked an eye when their son said he wanted to marry a man, never worried about him becoming a parent, etc. etc. etc. The moms I know and have met at least had doubts, worries, questions of their own. Sometimes these took minutes to overcome, sometimes decades. But I've yet to meet the real world Debbie Novotny, in short because I think she's what the writers created to become the paragon of acceptance, and not what real world gays experience. She's wishful thinking.

My parents started off not wanting a thing to do with Partner. Slowly, over the months and years following our relationship's inception, they came to understand that he wasn't going anywhere. They invited him to Thanksgivings, Christmases, introduced him to other family and eventually even their friends. They visit us and we visit them. My father calls to ask Partner his vet advice on one of their animals, and partner will call my mother to wish her luck on the new job. We've become a family, indistinguishable from other families. And then there are the hypothetical conversations... The ones where we talk about our hypothetical wedding and whether my parents will come - my mother frankly told me a couple of years ago that she was still undecided, a conversation we haven't revisited. However, my mother has also asked if we've considered adoption, because she wants to be a grandmother. 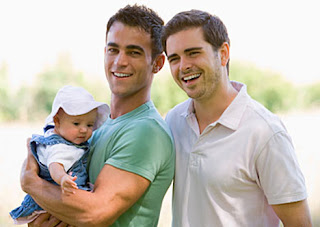 The tightrope is a tricky one. What boundaries can you push, when can you push them, and then - and this is hard for LGBT activist-minded folks - when do you back the fuck off? There's an importance to backing off. To letting your parents breathe and think and digest. We want them to become Debbie Novotny as soon as we let the rainbow out of the bag, but that's just not how it works.

I'm not sure I ended up with the best case scenario, but I ended up with a loving relationship with my parents, which is more than some get. And, for that, I am thankful.

So, here are my tips for you, dear Rioter, such as they are:


The problem with everything is time. I heard something several years ago that's always stuck with me about folks coming out and acceptance from family. What you - as the coming out person - need to realize is that you've been processing your feelings for years. When did you first have the idea that you might be gay? When did you come out? Was that distance 5 years? 10 years? 15+ years? For me, it was 8th grade (so...12 or 13) and I finally came out to my parents officially in college. So I had the rest of middle school, all of high school, and a good chunk of college to process, wrestle with, experiment, and come to the conclusion that I was indeed a died in the wool homosexual. I didn't accept myself at first, so it should be no surprise when my parents didn't either.

I realize that much of that doesn't apply to you, since you're clearly out, loud, and proud - what with getting gay hitched and all - but I hope you understand what I'm saying. You've had years to come to terms with yourself and grow. It might take him the same number of years it took you. It might take longer, but he'll come around...

The thing to do at this point is live your life. Embrace those folks who come around, but don't pressure (and pressure here can literally mean "invite them for Sunday dinner") those that don't want to come around just yet.