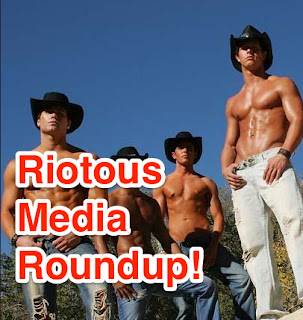 It's been a long time since I've done a book, movie, music, [insert entertainment of choice here] review. So, let's do several! 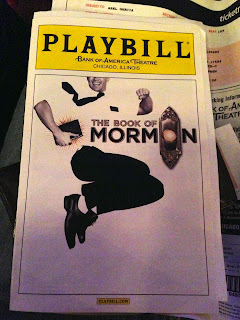 Last month I had the pleasure of getting taken out to see The Book of Mormon as part of a birthday present to me! Woot! I have literally nothing bad to say about this musical except that there were only two acts. As far as I was concerned, it could have had three or four and I would have been neither bored or squirming in my seat waiting for it to be over.

The musical is about two Mormon missionaries who get sent to Uganda - much to the chagrin of one of them, who was pining for the opportunity to go to the far off land of Florida. They see a man get shot in the head, learn about the AIDs epidemic, and meet a doctor with maggots in his scrotum...all in their first day. And it's hilarious. Really, really hilarious. The kind of funny where when people ask you about it, you tell them first that it's hilarious, but then find it quite awkward when you're explaining you were laughing about female circumcision in the developing world.

Book of Mormon is from the creators of South Park - Trey Parker and Matt Stone. It is possibly the funniest musical ever written, but it contains one of the best messages about tolerance and understanding ever written as well. The laughter helps you swallow the oft troubling questions regarding faith (or lack thereof), equality, how to deal with good people being put through terrible situations, and the stone cold fact that there are terrible people in this world doing terrible things. It is as sobering as it is gut-is-so-sore-in-the-morning-from-laughing-too-hard hilarious.

For those in the Chicago area, it is STILL HERE at the beginning of its national tour until October. If you'd like to get tickets, click here.

The book contains, as most of Pratchett's books do, a massive cast, which was not to its detriment. It gave Gaiman enough scope and breadth with which to tell several different poignant stories. However, there was no twist ending...there was no big reveal, and the story that ended up being told wasn't something I hadn't read elsewhere. Honestly, it felt like a much better written season of Supernatural. (Though, I realize the reviewer's fallacy of comparing a later work with one written a couple of decades prior. Still...)

If it had been a Pratchett novel, he'd have run away with the humor, and I'd have loved him for it. If it had been a Gaiman book, he'd have had a slightly smaller cast, a more rounded out protagonist, and told a story that would be no doubt memorable and gripping. As it stood, the two styles pulled against each other at very key moments, leaving them with a not-bad-but-not-as-good-as-it-should-have-been feeling. There were parts that were clearly Gaiman, and parts clearly Pratchett, and in those scenes I was intrigued, beguiled, and enchanted. But, this apocalypse was lukewarm for me.

The Grandest Steve there ever was!

Today I discovered a guy named Steve Grand. He's being labeled as a country singer, but from his YouTube page he's clearly in the Southern rock/pop genre with the likes of Gavin DeGraw, modern piano man Bruno Mars, and has the looks of a lead actor on whatever the next show on the CW involving copious shirtless scenes is going to be.

But, because of all of those things, this guy has a real shot at being the true young heartthrob the gay community has needed for years. A big, massive, huge breakout star that will sell millions of albums, put his poster on the walls of millions of bedrooms, and nobody will give a shit that he likes to go home to his husband. Yes, there are beautiful men who have come out well into their careers that we all love. Ricky Martin. Anderson Cooper. Lance Bass. Neil Patrick Harris. And, we have the fantastic gay folks who began their careers out, loud, and proud. Adam Lambert and Chris Colfer come to mind.

However, the problem with the first group is that they came out so late in their careers, some of them well past their time in the spotlight, that it wasn't as impactful as it might have been. If I had seen Anderson Cooper rise to the position he's in being out and proud, that would have meant something much more to me growing up in a small town in Texas. As it stands, it's great that he made it where he is, and it's great that he came out, but - as with the rest of them in that first category - it was long after their careers were established and their financial and commercial success was secured.

The problem with the second group is a more precarious one. They're not sex symbols. I know. That shouldn't matter, but Colfer, Lambert, and the bevy of up and coming gay talent (while handsome and talented and award winning and all that) just aren't going to end up on as many teenagers' walls as Grand might. I mean...look at him. 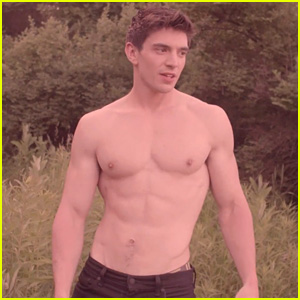 I know...I know...it's superficial, but, folks, that's what sells. Lucky for Mr. Grand, not only is he cover model pretty, but he's a damn good singer and has quite the presence, if his music videos for You & I and It Will Rain are any indication. But... That's not what matters. What matters is his first original song and music video: All-American Boy.

It's a fun, southern rock/country song that, if sung by Taylor Swift or Carrie Underwood or someone else with big hair and nice boobs, could absolutely top the charts. As it stands, it will be very interesting to see where this will go. He's clearly singing to a pretty sexy country boy - both lyrically and in the video - about unrequited love. (Ahh...who among us hasn't fallen for the gorgeous straight boy they can never have?) Hopefully, with the rise of artists who also sing about acceptance and equality - Kacey Musgraves, Lady Gaga, Katy Perry, Frank Ocean and the like - this song will find its way to the radio, blow up, and become the summer anthem that it deserves to be.

Right now Grand is an unsigned artist who just so happens to be blowing up the blogosphere since his music video hit the internet this Wednesday. In just over a day, it's gained over 250,000 views on YouTube, and that number is growing fast. If you'd like to support him, you can head over to his bandcamp.com page and buy his new single. You can pay as little as you want for it, but I paid $5. If I had lots and lots of money, I probably would have paid $100 or $1000 in a show of support for the career I hope him to have. But, for now, I paid $5 for his single.

Good luck, Mr. Grand. Soak up all this success. You've got a LOT more to come. (A LOT!) And now... Let's all sit back, grab a drink, and watch All-American Boy.