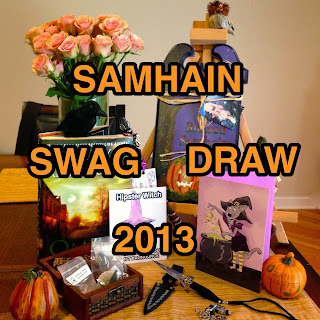 After much anticipation, I'm very happy to announce this year's Samhain Swag Draw! As you all know, it costs quite a bit of money to maintain the Riot. Once a year, just in time for Samhain, it comes time for Inciting A Riot to pay its bills. And, what bills are those?

Now, I happily pay these out of my own pocket throughout the year, but once a year I put it out there for you, the Rioters, to donate to cover some of these costs if you so choose. Inciting A Riot is a labor of love, which, granted, isn't labored on quite enough for my liking, but it's been regularly producing podcast content and blog articles for 4 years now. FOUR YEARS! Cannot believe it!

And, because I'm a glutton for punishment, in 2014 I will be - in conjunction with Mnemosyne Mars of Pagan by Nature - launching a new project that will be of (I think) great benefit to the pagan online community as a whole. But, until all the details on that are ironed out, I'm going to stay mum.

ALSO!!! Coming very, very soon, I'll be working to turn Project Pagan Enough into a real, true, honest to goodness Project. An academic study for the pagan community. In conjunction with a graduate program at the University of North Texas, we'll be studying the experience of pagans before and after their transition to becoming pagan. Again, more on that later.

Suffice to say, there are some really special things that are about to happen with the Riot. Not to mention upcoming interviews with your favorite Big Name Pagans (Dorothy Morrison & Christopher Penczak, anyone?), much, much more Teach Me Tarot, all your favorite Riots, and even more conversations between myself and Velma over at Inciting A Brewhaha.

Naturally, I would never expect you to just give over your hard earned money without there being something in it for you. That's where the Swag Draw comes in!

Every Rioter who makes a donation between now (September 22, 2013) and October 19, 2013 will be entered to WIN one of three amazing prize packages. That's right... Prize packages. We don't just give away one thing. We do this baby right. Thanks to some very generous sponsors and publishers, this year's set of prizes is worth over $500! You don't have to donate a certain amount to win any certain prize. I want to say thank you to those who keep the Riot afloat, so whether you donate $1 or $100, your entry carries equal weight.

But EVERYONE who donates will be getting a special shout out during an October edition of the show.

Want to see what you can win?

For one lucky Rioter, you'll be taking home this Grand Prize package: 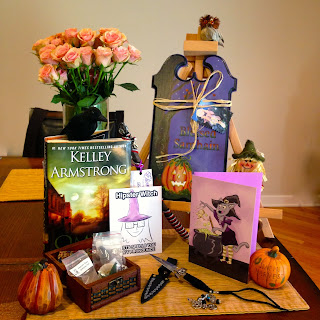 As you can see, this is one prize package worth taking home. And, all your Samhain themed goodies will be to you just in time to make your home extra witchy for Halloween!

The 1st Runner Up prize package looks a little something like this: 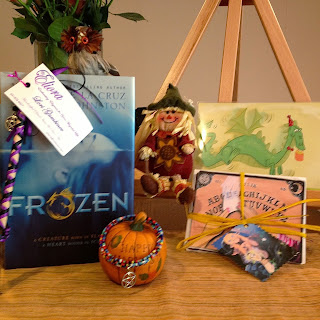 As you can see, we didn't skimp on the runner up prize package. But... I'm not done!

For the 3rd place finisher, you'll receive all of this:

I'm kind of jealous of the three lucky Rioters who will be receiving these items. I've been staring at them for a couple of weeks, just waiting to make this announcement. (Do you have any idea how hard it was not to read these books?!)

To enter the contest, you can click the PayPal donate button at the top left of the screen and enter any amount of your choosing. As I said, the contest is fair play. Any donor could win!

Special Thanks to Our Sponsors!

I would be remiss if I didn't thank our GENEROUS sponsors for the 2013 Swag Draw. Won't you click over and give them your business?