The Call of the Fox. 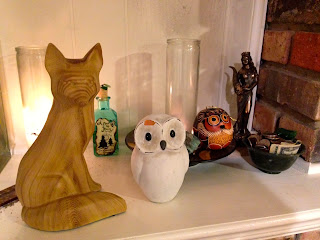 For those of you who've been following my artistic journey, you know about my Trickster series. Paintings featuring Loki, Raven, and Fox. Fox... He's shown up in both paintings so far. And, now he's started to take over my decorating. As you can see from above, my household altar - the one with the candles always lit and all the daily goings on happening - used to be a Fortuna altar. Then I was given an owl. And then I found another owl. And a jade frog happened. And after a trip to the Big Red Dot...Fox. Finally. Fox has made his way to my household altar. 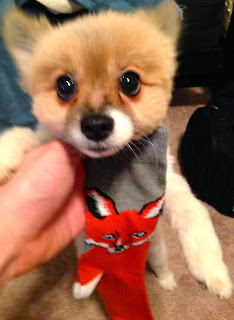 And my feet. Yes, those are Fox socks. (You can get those, as well, at the Big Red Dot.)


Fox shows up in my art, and he's got plans to show up in some more.

Now, I've never had a patron deity. I've never had anyone (should that be anyOne if I'm talking about gods?) express any kind of interest in me. Honestly, I've always thought all the talk of having deities call to you was more a way to say "I really like Deity X, and I would like to subscribe to their newsletter". But, I think it's time to admit that Fox might be saying Howdy.

Here's where the skeptical side of my head pops in. What, exactly, do I think is going on? Maybe I am just enjoying Fox iconography. Maybe my tastes are evolving to include fuzzy, red fur balls. Maybe there's an element of the traditional Trickster archetype that's speaking to me on a subconscious and spiritual level through the voice or face or whatnot of Fox.

I'd be interested in hearing about YOUR experiences with attention from an unexpected or unlikely deity. When have you felt a pull towards a specific God, Goddess, Spirit, Pantheon, etc.? How did you recognize that pull? Did the deity's images start popping up everywhere, or was it in dreams? Or, did you come home one day to find the Morrighan in your kitchen making paella?