Growing up I was a voracious reader. Living in a town of 585 people, hundreds of miles away from anything anyone in my current home of Chicago would call a city, one had to find ways of entertaining themselves. Books were my gateway to other cities, other cultures, other worlds entirely. I read the encyclopedia for fun, because history is always best when it can be condensed into a 1 page article spanning thousands of years. You get to hear all the good parts and ignore all the icky filler. (He said with tongue firmly placed in cheek.)

My earliest favorites were a mixture of comic book superheroes and Greek mythology. I read Edith Hamilton's Mythology before I read more age appropriate material, like Goosebumps. Still one of my favorite gifts from my uncle is a now incredibly worn out hard back copy of Arthur Cotterell's Encyclopedia of Mythology, which has gone on to become a much larger, more encompassing tome.

I grew up, too, reading the myths of Jean Grey and the Phoenix force of creation and destruction. Of Wonder Woman and Thor and Green Lantern and whatever the hell Aquaman keeps getting retconned into. As is seemingly the natural course of things, that early love of the superhero, both ancient and modern, developed into a deep and abiding love for science fiction and fantasy. One of the lessons I had to learn early on in my love of the genre is that it is, indeed, fantasy. It can be taken as a social commentary (Fahrenheit 451), a harbinger of things or ideas that might come to pass (The Hunger Games), or a beautiful supposition of the way life might have been in another time or if certain events had not occurred (The Mists of Avalon).

But, the lesson is that, in fantasy, it is not to be taken as a true account of how history happened.

Unless it's got something to do with Pagans... There's a show on FX called American Horror Story that changes its storyline and cast every year, in essence having a great first season telling a single story each season. This has allowed for one very creative show to tell, at this count, 3 very different, very creative stories in the horror/fantasy genre.

The first season, sub-titled Murder House, told a story of family, infidelity, and lying to create a glass house of the quintessential perfect family. The addition of ghosts, sex with ghosts, murder of and by ghosts all just adds a truly creepy twist to what would otherwise be a show on Lifetime.

The second season, Asylum, told a story of sanity, with the added bonus of aliens, demons, and Hostel/Saw-like torture.

The third season, Coven, tells a story of oppression of minorities through the eyes of a school of witches and a group of Voodoo practitioners in New Orleans. Because of its plot, A-list cast, and success of the previous seasons, AHS: Coven has become the most watched season of the show. The season premiere garnered 5.54 million viewers, which is about 1.7 million more viewers than the season prior and 2.4 million more than the first season.


I'm going to give you 1 guess which season has pagan bloggers in a freaking tizzy.

Everywhere you turn, some blogger has a broomstick up their bum about how historically or culturally inaccurate the portrayal of witchcraft, voodoo, paganism, Marie Laveau, and the rest of the characters based on historical figures has been. These bloggers seem incredibly upset that their beloved deities and practices are not being portrayed with complete historical and cultural accuracy, as though that is the purpose of entertainment.

I could go into a giant list of bloggers, the points they're upset about, and how they're individually being blown out of proportion, but I'd like to offer this instead. It is a series of 2 questions that will help calm your #PaganRage before it has a chance to fester:

Witches have always been a figure of myth and storytelling. The same people that are railing against the Hollywood entertainment machine are the same people that recommend books on folklore or cite The Wicker Man as a great representation of Paganism. They revel in myth, enjoyed Harry Potter without qualms about its representation of magic, and tell you their favorite mythological characters are Circe or Rhiannon.

We are cherry-picking when it is completely acceptable to omit historical and cultural accuracy and when it is blasphemy or misappropriation. Because the word 'witch' or 'voodoo' is used, we immediately get out our red grading pen and start ticking off all the failures of the piece of entertainment and how it is spreading all the terrible, terrible lies about a deity, a religion, a magical practice, etc.

But, we also hear stories time and again like mine, of people that grew up reading myth - modern and otherwise - knowing that people didn't really fly or turn sailors into pigs or feed our tears of immortality to an evil woman and then chop her head off so that she'd be a headless nuisance for all eternity. (Seriously, the plot points in AHS: Coven are pretty fabulous.) We can separate what is culturally accurate with what is made for entertainment purposes. I hear the name Papa Legba on a TV show, and he looks interesting and creepy and powerful and I want to hear more about him...so I make my way to my phone's search app and learn a little more about who that figure really is. 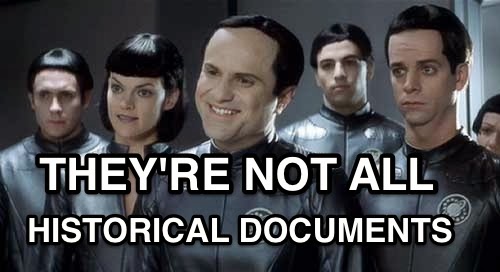 This isn't Galaxy Quest. We are not a society of simpletons who honestly believe absolutely everything on television is a historical account of what happened. If you're offended that your god-in-a-box is being portrayed incorrectly in a fantasy setting, you need to figure out why it is that you're watching fantasy. Witches, wizards, voodoo, hoodoo, spirit communication, faeries, elves, spirits, monsters, and more have been used as tropes in the genre for millennia. Whether it was a story about witches with horns coming to make mischief or a book about teenager finding out she's a faery defender of Avalon or a TV show about a bad ass Witch Supreme and her immortal frenemy, it is not supposed to be real.

It is supposed to be a story.

Now let's all take a second to remove the broomstick from our collective bums and enjoy it. Or, if you just can't bring yourself to do that, go watch a marathon of something on HGTV and let the rest of us have fun for an hour.