Skip to main content
Labels
Posted by Fire Lyte May 15, 2014

Have you seen this meme floating around social media? 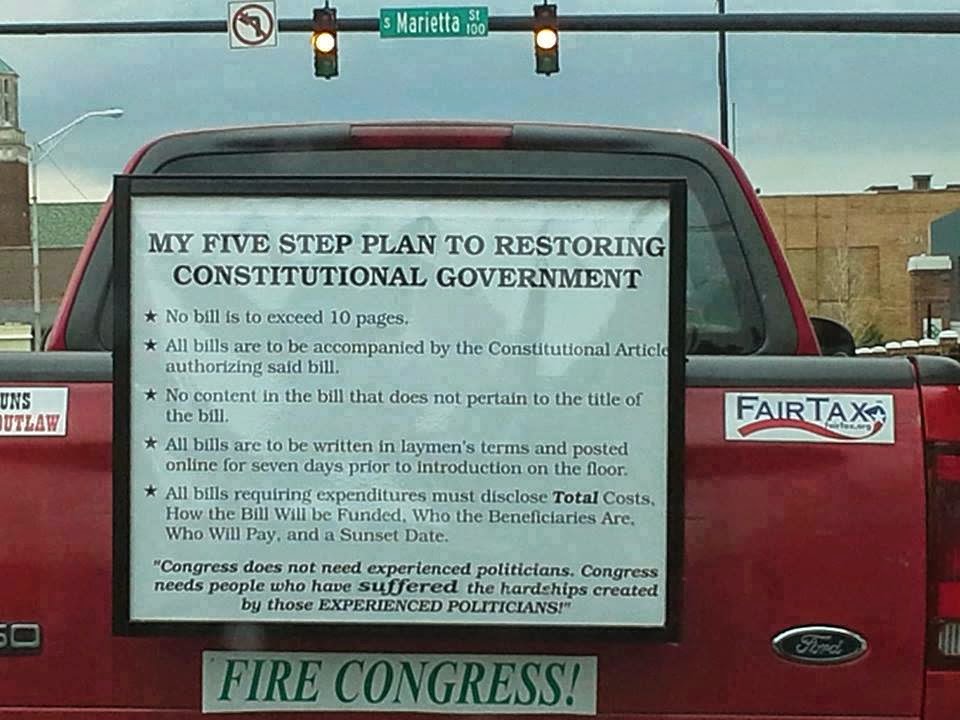 A lot of it sounds like common sense, right? Well...no. It doesn't. I was actually responding to this on social media, when I realized I'd written a blog post. So, I give you...


1) You'd better hope that you're only ever dealing with bills talking about naming bridges or deciding that May 4 is National Star Wars Day. Otherwise, a 10 page bill is a pipe dream. There are a lot of circumstances that must be discussed and fleshed out. This person states later that a bill must discuss full cost...in under 10 pages. My undergrad thesis required us to come up with our own piece of legislation, one segment of which was discussing funding for our bill. That alone was about 15-20 pages of text, not including the pages of footnotes and source citations.

2) The second point assumes that the constitution is a fixed document that can never be added to or amended in any way, which negates the last few hundred years of constitutional growth. It forces us to remain in a singular mindset, without allowing for a new way of thinking. This is terribly frightening from a sociological perspective, as many amendments have given rights to people that earlier amendments or laws had ensured would not have rights (women, racial minorities, religious minorities, etc.). If this person's idea is to be taken seriously, we must forever live in a world where some people just don't get to have rights, because they had the gall to not be born a wealthy, white, Christian, male.

3) Well, that's fine. Sure. Except that titles for bills are so broad and generalized as to be meaningless. They usually involve the words 'freedom' or 'family' or 'security', 'protection', etc. Overused terms that have no tangible basis in reality, and are tacitly creating a situation in which the bill could be about almost anything. A few examples: H.R. 21 is the "Reclaiming Individual Liberty Act". H.R. 118 "STOP the FEDS Act." H.R. 145 "Revoke Excessive Policies that Encroach on American Liberties (REPEAL) Act." How about the "Freedom Under Congressional Kings Of Federal Fealty" act?

4) Laymen's terms? You want bills in 'Laymen's Terms'? You know there's not a Dictionary of Laymen's Terms, right? Like, Laymen's Terms isn't a language. It's a way of saying "explain this in a way that an illiterate 4 year old could understand." I get it. The average person doesn't speak legalese. But, what are 'simple terms' to me are most definitely not 'simple terms' to other people. Granted, I have some education and experience in law, and my vocabulary is a bit more elevated than most. However, that's the rub. Whose terms are the new 'simple terms'? Are we pandering to the people that don't take the time to learn anything about how government works? Because, I have a problem with that. When I worked for the government, I'd have people tell me all the time what was wrong with this law or that. The issue that became apparent time and again was that the person had no concept for how laws are created, how they function, or why certain things are included or excluded in each respective law.

5) All bills must disclose Total Costs. Again, I understand, and I agree that we should have a better grasp of how much a bill will cost and where that money is coming from. I even agree that it would help if we made it known who might financially benefit from such a law. What private companies, citizens, or politicians are enjoying the pork from the barrel of that law? But, there's an inherent flaw with logic like this, and it is the same thing that anyone who has ever undertaken any sort of construction project knows: you never know all the variables. The contractor tells you that knocking down the wall between your kitchen and living room to create your open concept dream layout will cost $10k. Uh oh! He found mold. He found a bad pipe. He found out that the wall is load bearing and that if you are REALLY INTENT on making it an open layout that you're going to have to create a different support structure. All of those things are MAJOR bucks! They're also things you can't tell just from looking at the project at hand. You think you know how much a road project costs or a vaccination program or a freaking WAR ON DRUGS, but then you realize problems X, Y, and Z that you had no way of knowing beforehand.

The problem with these ideas

Imagine if this were being said about another industry. In fact, it's not that hard. This happens all the time. There are a lot of people that have formed an equally mistrustful idea of doctors.

We don't need career doctors! Their medicines that nobody can pronounce. Their medical speak. We need common sense folks with some common sense remedies that people trust. FIRE THE DOCTORS! They're paid too much, and they're getting rich off of you BEING SICK! What kind of twisted group of people want to get rich off sick people?! They have a vested interest in KEEPING YOU SICK! FIRE THE DOCTORS! Let's bring back chicken soup and rubbing dirt in the wounds!


There is something healthy about being skeptical. And, yes, there is a need for simplification and oversight in Congress, but the Tea Party notion of having every new bill served up on a silver platter of perfect research, perfect financial backing, perfect wording, and perfect concision is a pipe dream. It's also indicative of a group of people that want to control government without actually knowing anything about government or law or criminal justice or social science or any of the other areas of education that might be helpful in governing.

What do you think, Rioters? Bumper sticker ideas sound good, because they're simple and direct and relatable, but do ideas like these get to the meat of the issue? Do they eschew context in favor of talking points? Or, do they have a point?