She was already baptized. 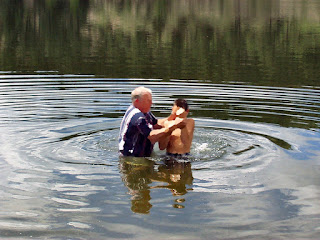 Facebook is a strange place. In our small town we had somewhere between 61 & 69 kids graduate in our senior class. (Nobody in our class knows the actual count, because some folks were held back, others moved, and the truth is that nobody cares.) Incidentally, at the time we were our school's largest graduating class. Our 10 year reunion came and went last year. As far as I know something like a dozen people attended. Facebook makes the need for a reunion unnecessary. We see the folks we want to see online, and that's enough for most of us.

Yesterday, I was browsing my mundane timeline when I saw a video posted of a baptism. While I will not repost the video here for privacy's sake, the text accompanying it reads as follows:

What an amazing day today has been. Anyone who knows me knows my love for my Lord and Savior. They also know my love for the greatest gift he has ever given me, my wife. Well today I witnessed my wife get baptized and it is a day I will always remember. A lot of couples have different things that only they can say they experienced together, well me and my wife have ours. We were both there when the other received God as our personal savior and both there when the other was baptized. God is so amazing. Ruth 1:16-17 #whereyougoiwillgo


Now... My immediate reaction was an eye roll. No, I don't hate love and affection. No, I'm not anti-Christian. And, no, I don't morally object to hashtags on Facebook. However, there's an issue with the above mentioned "first time". It wasn't her first time. I was actually there for her first time. I went to Sunday school with her. Youth group later on. I went to church camps and Bible camps and camp outs and all sorts of events over the 13 years of our growing up. And, most germane to this conversation: I saw her baptism. The actual first one.


I say this to admit to you that my immediate reaction was to scoff at this. Because I know, after growing up in a Southern Baptist household, that there are some technically incorrect things here according to Baptist doctrine. Chief amongst them is the notion of "Once saved, always saved." Once you've been saved and baptized, you're saved. You're going to heaven. Jesus has your bus pass and all he needs is for you to die. All aboard. Yippee. So, did she get saved when she was a kid (espousing the power of a childlike faith and all that) or is she actually saved now? Did the first one not count?

I scoffed because I've seen this dozens of times. I've seen my own brother "get saved" a few times in his life, each time requiring yet another baptism. I'll tell you, when you're growing up and you see all the other kids getting baptized the urge to go through that social rite is pretty powerful. I, too, have been saved. The preacher came to my house. He asked me a few basic Bible knowledge questions to ascertain whether I knew what the fuck I was saying yes to. And then I got dunked on a Sunday in front of the congregation. (The same congregation that petitioned to have me expelled from high school later on, but I digress.) So...you know...see you fuckers in Heaven I guess.

I scoffed because I thought What the hell kind of deity needs his people to constantly fear for their eternal soul so that they must feel the need to be saved over and over again? Doesn't he know there's a drought? And he wants them to just take a big ol' swim because the last one didn't count?

You see... It's easy for us to disassociate ourselves from Christianity and its practices. They're the Big Bad, right? They're the ones behind the Duggar cover up and the number of trans teen deaths and the fight against marriage equality and didn't they used to kill scientists for being scientific? It's easy to scoff at the majority when you're in the comfort and privilege of being a minority.

But then my mind went elsewhere. My mind went to the hard work I had to do to get my own spirit back in line with the deities of my understanding. I recalled the Big Spiritual Freakout I had a few years ago. I recalled not believing in anything. I recalled the sleepless nights when faith seemed like a bad burrito I once had. When it was a joke I used to tell myself. When the spiritual was out of my reach.

I remembered feeling lost. After being spiritual - even having some internet fame for my spirituality - for decades, suddenly not having that connection feels... It's one of the loneliest feelings in the world. Who am I to discount someone else's journey?

And so I clicked "Like" with a smile on my face and a bit of contrition in my heart.