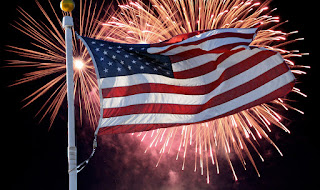 America is careening headfirst into the most patriotic weekend on the calendar:
Independence Day. 🇺🇸 It's a time of flag waving and hot dog eating and fireworks exploding and a time when folks pretend, at least for a day, like the political history of this country is a nice, straight line of nice, polite people that did nothing but have sex with bald eagles on a red, white, and blue bedspread and give birth to tiny, crowned Lady Liberties that spend their respective lifespans baking apple pies and killing terrorists. It's a time when we fall in love all over again with the idea of America.

And...that's great. But, when July 5th comes around, I think we need to have a discussion.

So go...have your fireworks...and then come back and read the rest of this.

I'll see you then.
Back? Great. How were the hot dogs? Did Uncle Sam & Lady Liberty ride an elephant and a donkey into battle against the Taliban and use Christian prayer to resurrect the founding fathers to subdue ISIS and now you're cuddling your Ronald Reagan body pillow and thinking of all those amazing fireworks? Yeah... Those were good times. Back to the grind. 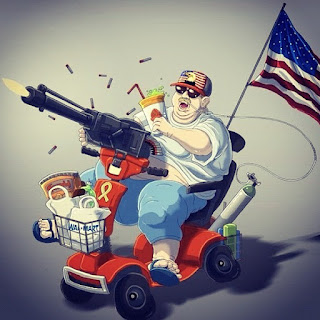 We're heading into the 2016 election cycle, and one thing is becoming abundantly clear: the American people have no idea who in the hell they want running their country. This is especially clear for the Republican members of our populace, as they had 19 declared candidates at last count. Now, maybe I'm very delusional, but I don't remember a time in living memory when we had 19 candidates (WITH AT LEAST SOME NATIONAL NAME RECOGNITION) and counting. The field is still growing. At this point it would be easier to name Republican elected officials on the national stage who have not declared. (Please don't. There's a legend that if you speak a Republican's name in 2015, they HAVE TO RUN FOR PRESIDENT! It's like witchcraft or something.)

But, I digress. The Democrats don't have it much easier, as they seem to be having a repeat of the Republican battle in  2012. Remember Ron Paul? Oh yeah... He was making waves and rousing the support of all kinds of grass roots groups. His notions of the gold standard and legalizing drugs were a hit with the young and uninformed. He became the embodiment of an idea called "Libertarianism" - which seems to mean anything from ultra-conservative Republicans that don't like taxes, to young people that want to smoke pot, to Kelly Clarkson for about a week. Not to say that being a Libertarian isn't an actual political view, but to Paul supporters it became something more. An idea. A bandwagon. A cause. A time to say "we don't want big business buying our elections and we want government out of our lives"! 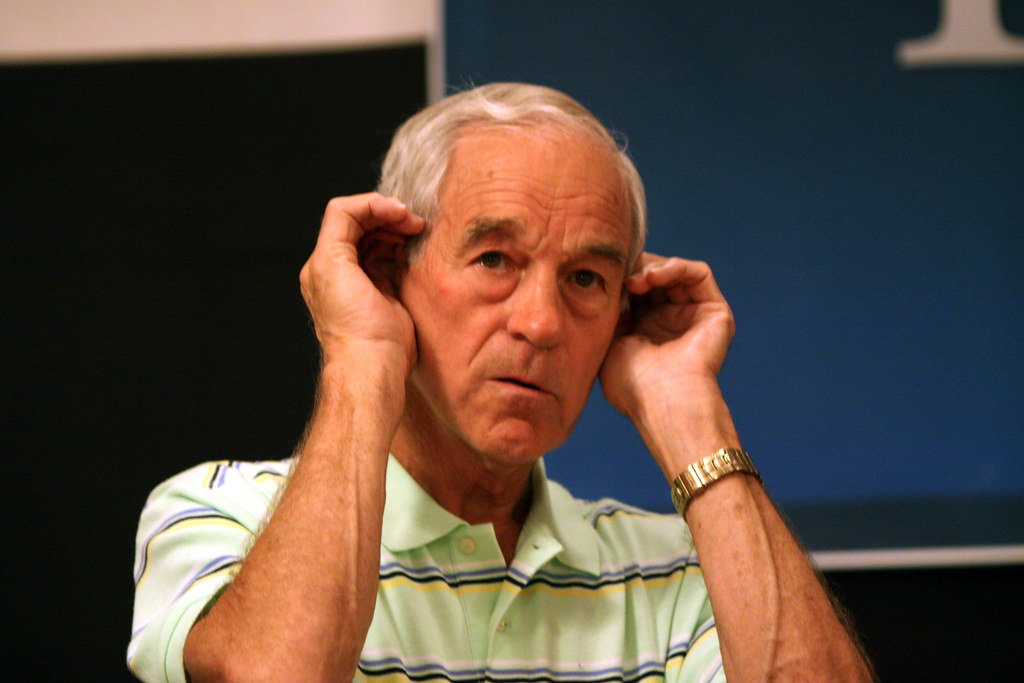 Paul's entire, illustrious political career boiled down to bumper sticker politics: generic statements that could apply to absolutely anyone in all walks of life. (You're right, Ron. I don't need the government telling me not to do heroine. I wasn't planning on it in the first place.) And, for a while, he seemed like he was gaining ground. He was a runner up in a few primaries before his star faded and Romney, the Sith lord that sold his soul to whatever deity governs greed these days, became the nominee. Then it was business as usual. The incumbent won, the challenger got to represent everything that wasn't the current administration, and the people decided to go with the devil they knew.

Here we are again... A few years later, but this time both parties get to go through the primary process. Despite all appearances, the Democratic frontrunner - Hillary Clinton - isn't actually an incumbent and does need to win the Democratic nomination. Except, there's this guy named Bernie Sanders.

Now, stop me if you've heard this one. He's an elderly candidate who's lived his entire life in the political system, never veering too far from his core values, and is running a campaign that is making a very big deal about not taking money from big business and keeping government out of your private life. Instead of splitting up the conservative voter bloc, he's shaking up the ultra-liberal voting populace, and seems to be incredibly popular amongst young voters that really don't like the idea of someone who has a PAC and a politically savvy response to everything.

To them, Clinton is seen as someone with too much money and too many business connections - despite investigation after investigation coming up roses for the Clintons in regards to impropriety.

Here's where I'm concerned: I don't particularly care, at this point, who you vote for. I care that you don't actually know why you're voting for them.

During the 2012 election cycle, the PewResearch Forum came out with an interesting survey that showed most registered voters would get a failing grade when it comes to a basic knowledge of: 1) who the candidates are, 2) where they come from, 3) what they stand for. That last one most especially. When it comes to the issues, most folks simply do not care to learn the facts. (And, Democrats, sorry but you actually lost to Republicans AND Independents in this survey as far as basic knowledge of the issues.)

I recently had a conversation on social media with a big Bernie Sanders fan. She said that if Clinton won the nomination she would probably just not vote in the election. She stated that Clinton was a "puppet" and that she didn't like her taking money from businesses for her political action committee. However, when I asked her about other issues, or challenged her on Sanders' lack of foreign affairs experience, she said that the entire political system was dysfunctional and that she had no desire to study politics.

My opinion on Bernie Sanders and Hillary Clinton and Chris Christie and Donald Trump and Jeb Bush and Bobby Jindal and the whole rotten lot of them is this: vote or don't vote for them, but do it because you know exactly what they stand for and why they stand for it. If nothing else, you could read their Wikipedia articles to give you a quick and dirty history of their time in office, their voting records, and what experience they have in various foreign and domestic affairs. However, your alternative simply shouldn't be "not voting" or voting based on a single issue.

We have barely half of eligible voters actually voting in our elections. Barring a handful of election cycles, we haven't exceeded 60% voter turnout since 1908. Our voter registration and turnout trail nearly every developed nation. For the love of god, GREECE - whose economy is actually collapsing as we speak - has a voter turnout that would give American political junkies wet dreams...and they're not even the best!

America is said to be the greatest nation in the world. Our culture, our ideals, our way of life is coveted and idealized around the globe. Here at home, however, our populace takes it for granted. We do not choose to learn the basics of how our laws work, how our government functions, and what our political candidates stand for. Although we have zero problem voicing to the social media heavens why the government is sending our country to hell in a hand basket. We do not mind one bit screaming our bumper sticker politics at each other and hitting the block button when someone challenges our unresearched, emotionally couched worldview. We do not have political discourse. We have 140 character political statements that mean nothing, apply to everyone, and - much like cherry-picked Bible verses - are used to beat one another into submission.

You know what I would love? I would LOVE for someone to tell me they were voting for Bernie Sanders, because while our economy has shown incredible resilience, it will need a steady hand to continue its growth before interest rates skyrocket and our bubble bursts. As someone who has spent his political career in various Senate subcommittees directly dealing with finance, job creation, and the budget, Sanders is in a key position to guide our country to continued prosperity. But NO! I can't get that. I get HILLARY CLINTON IS THE DEVIL AND SHE IS IN BED WITH BIG BUSINESS! This means nothing. It changes nothing. It not based on Clinton's voting record or political suitability. It's a meme. Meme politics will only serve to get us a person office who is guaranteed to screw us over, because nobody realized who they were or why until it was too late.

What can you do? I get it. You're busy. I'm busy. We're all busy. Do you have a commute? Listen to your local NPR station. They cover the day's news all day - every hour - and will serve to give an emotionless representation of the facts concerning candidates and their political positions. Even if your commute is 10 minutes long, that is 20 minutes of information every day 5 days a week. From now until Election Day 2016, that's somewhere around 365 days and 121.7 hours. If you have a 10 minute commute, and you listened to unbiased news during that time, you could have over 121 hours of political information under your belt before you walk into a voting booth. You didn't have to do anything more than tune your radio to a different station.

For smartphone users this is incredibly easy: go to your radio app, search for NPR, and it will be automatically added as a favorite. Just hit the button and go!

If NPR isn't your thing, there are dozens of podcasts that recap daily news. CNN has a 5 minute podcast where they give quick headlines of the news from the day before.

But, whatever you do, make it a priority to find a few minutes a day to get yourself informed and keep yourself informed. If you find it boring, make it interesting. Discuss it with your friends & family in a judgment free, open dialogue. Let it be a living conversation in your household. Find the causes that speak to you and dig a little deeper into those. Read a wikipedia entry on your lunch break.

Get informed. No more bumper sticker political statements, Rioters. I mean it.