The Most Interesting Pagan Books Ever (an informal survey) 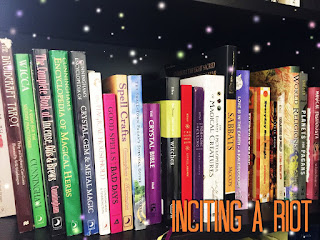 The end of a year brings about a lot of lists. The most important famous-for-doing-nothing people of 2015. The best cupcakes in the neighborhood. The 15 worst fights of Black Friday madness.

Many Pagan blogs like to put out their annual lists as well, and I was very tempted to do something similar. My favorite pagan moments? Best spells cast of 2015? Wildest Social Media Rants by Fire Lyte?! But, no. I decided instead to let you, the Rioter community, put together this year's list with one little rule: Give me the most interesting book on your Pagan book shelf.

Many people were confused.


See, I have found that if you ask someone what the "best" or "favorite" Pagan book is, you get a pretty shallow group of names. The same 5-10 authors pop up in these lists, depending on whether the creator of said list leans more heavily on intro books by major publishers or more esoteric books and indie publishers. The term "interesting", however, got people thinking.

And...gosh...you all really put some effort into this list. There are familiar names like Margot Adler and Judika Illes (whose name has been giving my computer's autocorrect an absolute panic attack). There are former Riot guests like Signe Pike. Friends of the Riot like Peter Paddon and Phaedra Bonewits. And...then...there were a dozen or more authors whose names I'd never heard before.

So, this is a list that isn't counting down to anything. There is no ranking here. This is just a giant list of the books YOU, the most fabulous folks on the Pagan interwebs, put together.

If you don't see your favorite, please list it in the comments below! And also comment if you found a new favorite for your own collection.

Oh, one last thing. If any of the titles or author's names are misspelled, please feel free to correct me. Given the size of the list, I didn't have time to check each and every submission.