We need to talk about Asatru 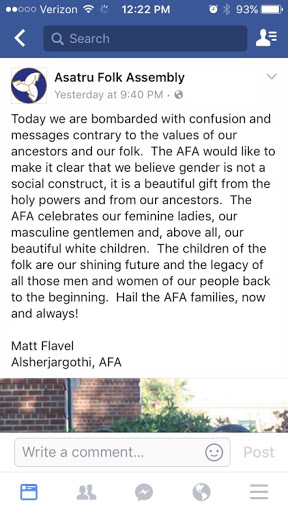 For years now - longer than I have called myself Pagan - there have been a few issues that rise and fall as assuredly as our seasons. There's the "Silver Ravenwolf is a terrible author" thing and the "Is a wand/athame associated with fire/air" thing and the "What does 'Pagan' mean" thing and so on. These topics come up, get everyone all hot and bothered for a bit, and then disappear waiting to go unsolved another day. There are a few topics, though, that don't come up very often because they're less fun to debate online. Things like consent and sex and homophobia and racism. One of those topics is back, and it's time we stopped avoiding it.

There is an uncomfortable correlate between Asatru and racism, homophobia, and xenophobia.


Before you stop reading, turn red in the face, and start blowing up my comments section, please note: I did not say Asatru = racism. I did not say all Heathens or Nordic Pagans are homophobic or promote xenophobia. I'm not advocating anything of the sort. However, one of the dirty secrets of the Pagan umbrella is that there is an uncomfortable correlate between white supremacist views and those that identify as Asatru/Heathen/Nordic Pagan.

Earlier this week the Asatru Folk Association caused quite a bit of uproar in the online Pagan community when Matt Flavel, one of the new heads of the Asatru Folk Assembly replacing Stephen McNallen, made some pretty homophobic, transphobic, and outwardly racist remarks on social media. 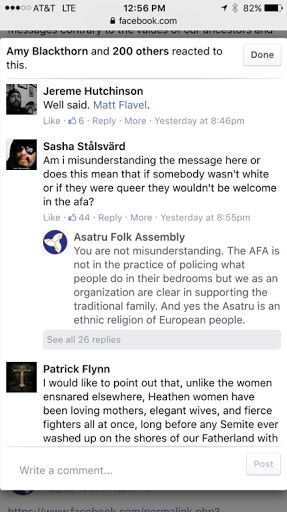 And, it might be easy to get upset at these statements, and the comments that followed, as though they are something new. But...Asatru's founder, McNallen, has always espoused ideas of genetic purity, which seems to have been a kind of dog whistle to those in and around our community over the last several decades that buy into ultra-conservative ideals of eschewing anything that is the "other".

However, I wonder if it is fair for those of us that identify as broadly Pagan to cry foul and seek to police the behavior and beliefs of those that con scribe the term Asatru. McNallen has said his movement doesn't really fit in with broader, more eclectic or inclusive, Paganism. From his interview with Margot Adler in her book Drawing Down the Moon:

"We're not eclectic. You won't find tarot or astrology or I Ching incorporated in Asatru - not because they're not valid or powerful, but because they aren't ours. That isn't to say of course that an Odinist can't utilize these systems as an individual, but they're not a part of Asatru."

Though, for someone who says he's not eclectic, McNallen then immediately said you could label Asatru as "Norse Shinto".

In other areas of Heathenry, views are even more pointedly racist. Adler discusses The Odinist Fellowship, which had an article that said:

"The most distinguishable feature of Odinism is that for the first time a religion has declared itself founded upon the concept of race, with its correlation to culture and civilization. Without race there is nothing' therefore our first duty is a study of race and the significance of Aryan people to world history."

And it should be noted that the AFA, at least during the printing of Drawing Down the Moon, said in its values, "Kinship is better than alienation...Ancestry is better than universalism," which, to some, may seem somewhere between ironic and hypocritical.

There are a lot of places where we can look down our noses at this behavior. We, as the broader Pagan community. Today, SJ Tucker found my Project Pagan Enough movement, and reminded folks that it is about inclusivity and discussion. The word "Pagan" in the modern context includes a wide swath of people and belief systems, which is impressive for a group that accounts for something like 0.3% of the total United States population.

We are Voodoo and Appalachian Granny magic and Greek Reconstructionist and Wiccan and Christo-Pagan and Vaguely Spiritual-But-Not-Religious and points between and yon. We are an impressive range of humanity huddled under a tiny Pagan umbrella. And, yes, it still covers Heathens, Asatru, Odinists, and Nordic Pagans until such time as it doesn't.

But, we need to stop pretending like everyone under the umbrella believes and espouses the same things. We need to stop acting like we don't have topics we sweep under the rug. We need to address, head on, racism, homophobia, transphobia, and xenophobia where it exists. We need to do it with discussion and level heads, while also drawing a very clear line of what is and isn't acceptable.    And we need to do it both as a group and from inside the Asatru (et al) movement. 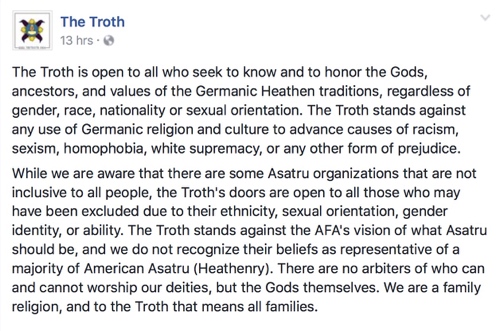 See, the Asatru (et al) community is also saying "Listen, we believe differently than the rest of you inclusive Pagans, and that needs to be respected." Ok. I get it. You've created your space where you get to say and believe whatever you want no matter how deplorable the rest of us find it, and I'm actually glad of that. I'm glad that we live in a country and time where even outwardly bigoted views can be protected.

But...and this is important...if you believe as I do, that inclusivity and diversity is a beautiful thing, and you also identify as Asatru, Odinist, Nordic Pagan, Heathen, or some unknown-to-me-but-still-adjacent term, I implore you to reach out to your fellows in that community. Engage in respectful dialogue. Many of the beliefs and practices that form the basis of the more xenophobic ideals existing in aspects of Heathenry are either misunderstood or simply come from a time, place, and society that might need to be updated a bit for modern culture.

We say this about other religions all the time. "Well, the Bible needs to be viewed in the context of the day..." Same with Odinism. Filter the teachings and lore through a modern lens. Take from it the teachings of strength and equality and magic that are there...and perhaps leave behind the McNallen-ish views of racism, genetic purity, and xenophobia.

But, again, I'm an eclectic modern Pagan. While it is my place to discuss the dirty laundry of the Pagan community as a Pagan, it's time that those in our community who share Odinist beliefs but don't share racist ideology to stop sitting on the sidelines and start engaging. Start telling others, as Lupa said on his blog, this is #notmypaganism.