I did the Trump Hex, and I don't apologize for it. I wasn't going to participate in the magical assault  on Donald Trump. It wasn't because I have some moral apprehension when it comes to binding or banishing or cursing. (And if you're one of those folks who was decrying the use of magic against Trump, you're probably all sorts of privileged and don't understand the palpable fear from the marginalized communities targeted by his ilk.) It was because it felt a little too...I dunno... Familiar  Sensationalized? And, if I'm being honest, I have begun to resign myself to the fact that this is reality and we haven't been punked by the universe and we aren't going to wake up and find out we get a do over.

Yes, a little teeny tiny part of me that's covered in glitter and likes hot chocolate and Disney movie marathons was holding out hope of some kind of magical deus ex machina. Don't laugh. I'm desperate.

By now you've seen the news stories that a group of witches, non-religious folks, Christian mystics, and Lana Del Rey all decided to hex the ever loving shit out of our (sorry...choking back bile saying this) President. It started with a call to bind Trump and all those who abet him and turned into a worldwide call to magical arms. February 24, set your wands to "curse" and aim them at the White House.

I wasn't going to do it, because, if I'm most honest, I didn't think for a second it would do anything. And I don't know what that says about me or my relationship with magic or my relationship with the divine. I think it says that I think whatever energy was created by his followers and those that put him in power is mightier than mine. And...again...I don't know how to feel about that.

It was my husband, my most non-religious-but-technically-Catholic husband, who heard about the movement and cheerfully decided we were participating. He's a gay Mexican immigrant. He's angry and scared and a spectrum of unnamable emotions of which I can only guess. It was his unabashed enthusiasm for the event that moved me to action.

Now, I'll admit, I didn't really care to read up on the binding that was going around or to adapt it to my needs. I'm sure it was a fine spell. I figured if I was going to participate, I was going to do the kind of spell I wanted. I called up my friend Vinna Harper (literary maven here at the Riot) who decided she also needed an outlet for her fear and anxiety and that magic was as good a form of protest as any. That's what I felt this was. Magical protest. Magical psychology. Working through the complex knot work of trepidation and rage and despondency by working magic, because when you have nothing else to cling to you can still cling to your inner spark of divinity. The bit of your heart that never stopped being starfire before it transmuted to flesh and bone. 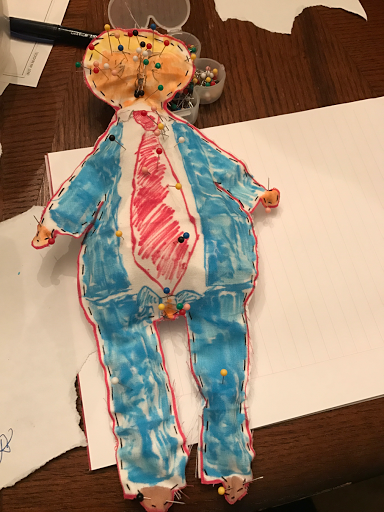 We decided to make a simple cloth poppet, fill it with paper messages and ideas that embodied Donald Trump's actions and ideologies, as well as our own reactions to them. We colored the poppet to look like him, pants unzipped and penis exposed because of his known history of sexual assault and because of his pride. We named it. And then we stuck pins in it while stating what we wished would happen. 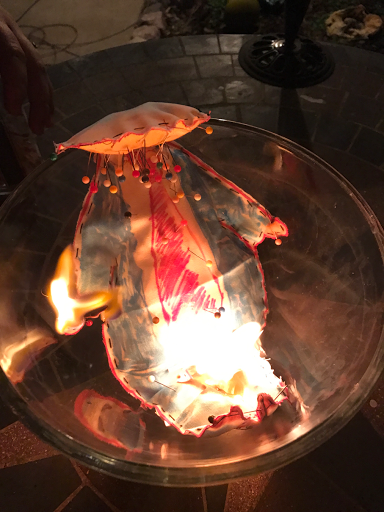 Then we spat on it, burned it to ash, dumped the ashes in the toilet and...well...fiber and coffee was involved before we finally flushed him down the drain. (Note: we saved the pins and did not flush those down our plumbing system... Just saying, before someone freaks out about fish eating our spell ingredients.) 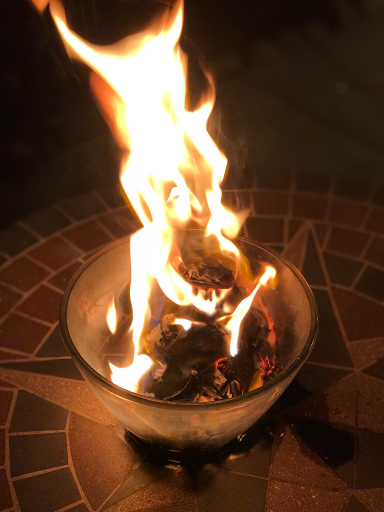 It felt good. It felt like release. It felt like protest. It felt holy. And I have no clue if it "worked" in the sense that I have no idea whether we will be seeing Trump impeached and removed in the near future, or suddenly afflicted with maladies unknown, but I know for damn sure it made us all feel better and more secure and more united, which is magical in and of itself.