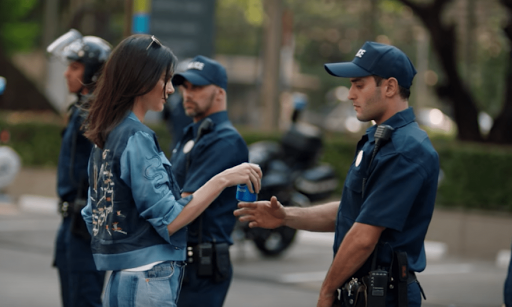 By now you've heard about the Kendall Jenner Pepsi ad that's possibly the most tone deaf advertisement I've ever seen. It tries to make protests trendy. It whitewashes/heterowashes/privilegewashes/nicewhiteladywashes just about every kind of resistance movement that's sprung up in the last decade that could potentially be depicted by said protest. It erases the real and really problematic dynamic of police brutality in relation to protests involving minorities of all kinds. And, apparently, all the outrage around the add is fake or misplaced.
Just ask Twitter: 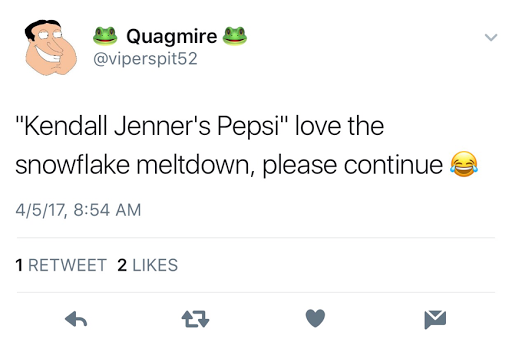 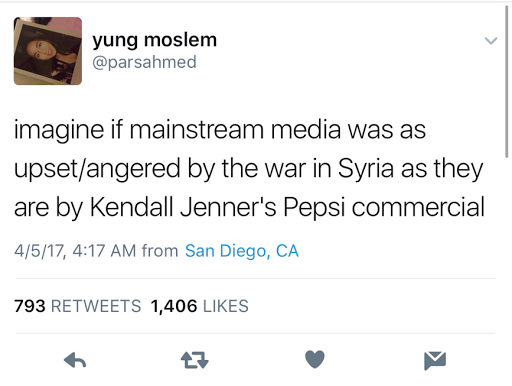 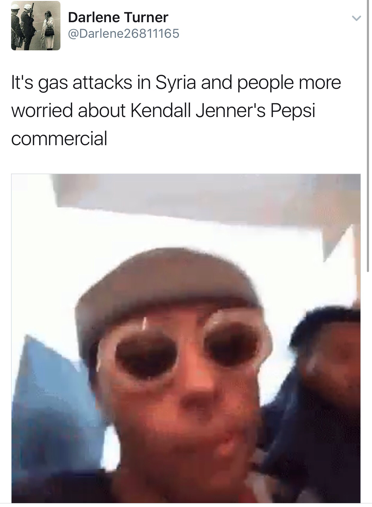 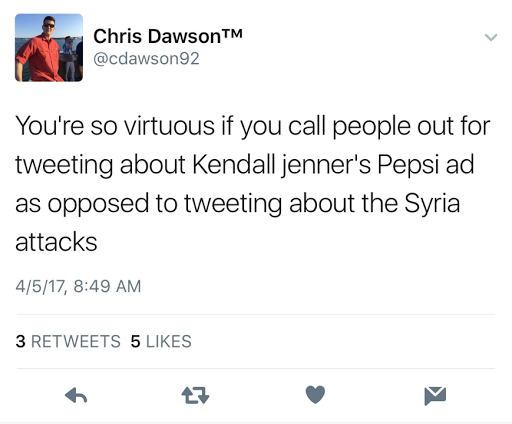 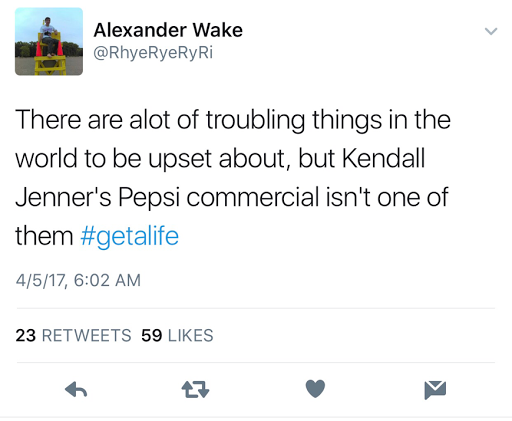 Most of the tweets in this vein are highlighting the recent gas attacks in Syria and the egregious loss of life that resulted. They create an antagonistic dialogue that belies the idea that you cannot be outraged about two things at once, at least, not if you're serious about your outrage.
One of the first things that I was taught when undergoing counseling training when I worked with children in the four system is to never undervalue their grief. That when a 9 year old's dog dies, and they feel like it's the end of the world, the last thing you could say to help the situation is "it's just a dog" or "you'll get another dog" or something that an adult might understand given age and context and a more vibrant life experience. But that early lesson about the context of life events eventually morphed into an understanding that people are complex beings capable of feeling all sorts of emotions about any number of issues all at once without ever taking away from their seriousness about each respective issue.
When the United Airlines controversy surrounding women and the company's amorphous leggings dress code occurred recently, men were coming out of the woodwork to decry the outrage. They're just rules, these men said, and you have to follow the rules. Many other men - I say men, as every single man that I interacted with regarding the issue made these statements while almost all women saw the issue as body policing - tried to place perspective on the outrage. They claimed it was a privileged outrage. They laughed. "White girls are mad they can't wear leggings." As though the issue were about a trend and not about shaming women for having bodies. You saw the comments of men saying "with all the issues in the world today, this is not a problem".
Here's a bit of truth: there is always someone, somewhere, somehow worse off than you. That doesn't mean your intersectional oppression is any less real or any less important. Telling women in the United States that their bodies are shameful, telling Pepsi their ad is tone deaf, and being outraged at the genocidal massacre in Syria can all happen. All at once. By the same person. And there is no Priority Ladder™ that has to be met, no prerequisite outrage one must experience, before you're allowed to be outraged about more than one thing.
Here's the flip side: you can be outraged and still find happiness, however small, and do so without guilt.
I think this is the biggest hurdle with which many allies and progressives and left leaning, well-meaning people struggle. If you watch the news, horror-struck, at the atrocities of a church bombing or a school shooting or a gay nightclub massacre, and then go have a lunch with your work friends that lifts your spirits a bit, you are no less entitled to your outrage or your temporary joy. The point of advocacy is not to be permanently despondent at the state of things, but to recognize them, to call them out, and to endeavor for change. You cannot do that work if you are, yourself, a basket case of nerves regarding All The Bad™.
Do not let someone else tell you that your issue is too small. Do not let someone tell you that the injustice you met is too insignificant. To paraphrase Elizabeth Gilbert, by making one wrong situation right, in a world of wrong, raises the average rightness in the world. Your endeavor, however small and however mighty, is working to raise the overall good, and that is valuable.
Pepsi pulled their ad and issued this apology: 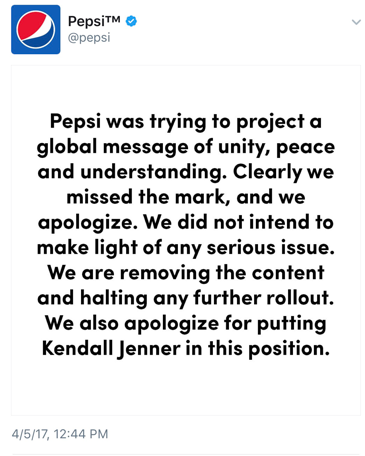 I'm not quite sure why they're apologizing to Jenner, a 20 year old adult with enough time spent in the public spotlight to understand current events and has the assumed wherewithal to make her own decisions about saying yes to a job offer, but I'm also not blaming her more than is necessary. But, it sounds like Pepsi listened to public backlash and realized they should go back to telling us all how delicious their sugary beverage is accompanied by fat and carbs and stay away from telling us... 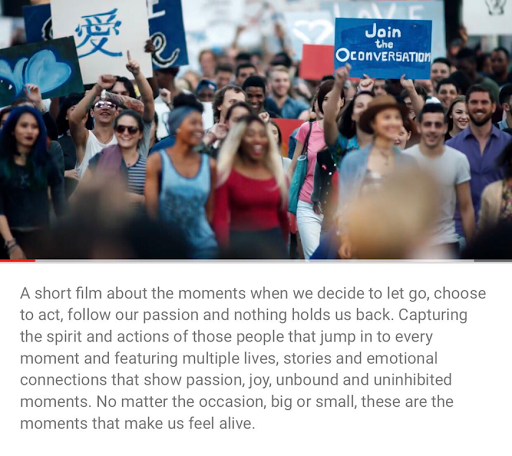 Go, reader, and Riot. Riot if the situation calls for it. Riot for equality. Riot for body politics. Riot for autonomy. Riot for religion, for peace, for safety. Riot when an innocent dies. Riot when your right to your identity is taken. Riot when your beliefs are threatened. Riot when injustice is meted out. Riot, because your Torch and your Pitchfork are the most powerful in the fucking universe, and you are an instrument of divine change if you choose to be.
Love and Lyte,
Fire Lyte
Email Post
Labels: Crisis Management Douchebags Feminism GLBT Gripe Department News Race in America Religion/Politics Soapboxes Sociology 101 Tragedy