Wonder Woman on my Altar: Modern Faces of Ancient Deities 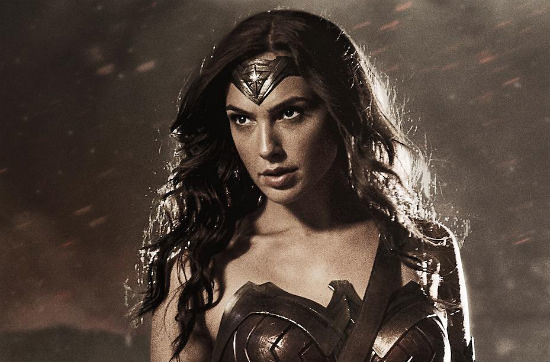 Wonder Woman has had a massive impact on moviegoers this year. As of this writing, it has made around $750 million worldwide, and that number is only climbing thanks to the confluence of a number of factors:


Seeing Diana Prince fight on the battlefield against a World War I backdrop was incredibly powerful, but it was what happened at the end of the film that caused me to have an Aha! moment (and what led to a rewiring of my own thinking about the nature of deity).

Fans of the comic have known for quite some time that, technically speaking, Wonder Woman/Diana Prince is a goddess. I've seen her called a goddess of hope, a goddess of love, a goddess of war, and sometimes simply a demigoddess by dint of her divine nature. And, in film, this feat is made apparent in Diana's final battle with the movie's Big Bad - Ares. She assumes her divine mantel and is able to defeat him in the end. It's a beautiful moment for the character, for the audience, and it was an awe-inspiring moment for me.

And...it was in that moment that I finally got it knocked into my thick skull what many have been saying for years. Comic books are modern myth.
Back when the Riot began, I initially made a name for myself on places like Witch Vox and elsewhere with an article titled "The Pagan Secret". The gist of the article was that Paganism has enough "real" gods and goddesses in it, and that adding figures like Santa Claus to that list was somehow beneath "real" Paganism. It was the work of a young Pagan who had a lot of book learning and very little lived experience who was determined to show off how very, very smart he was. Later on I wrote blog after blog after blog amending and undoing the thoughts I expressed in that initial article, but I don't think I ever did so having actually learned the right lesson. And, it's a lesson that I should have learned much earlier, as it was something I discussed in another widely read, early Riot era article "Playing with God-Doh" in which I discussed the historically accurate fact that the names and faces we attribute to the gods have morphed over the millennia as their myths were blended with the meeting of cultures and taken across the world.

In retrospect, I have to wonder why it took so long for me to be able to accept the idea that, if Athena can go through a number of name changes depending on the culture in which she finds herself, why not add another name to the list? Why do we accept that the evolution of deity stopped somewhere along the way? If the gods themselves didn't stop existing thousands of years ago, then why do we assume that their names, faces, and roles stopped changing as well?

American Gods is my favorite work of standalone adult fiction. Hands down. It is responsible for multiple spiritual and personal Aha! moments along my path. And, it's become a runaway success for Starz in its television adaptation. I was a bit nervous to see American Gods being given the TV treatment, as the book is so precious to me, and other literary favorites didn't quite make the journey from page to screen successfully. (Looking at you, Harry Potter, Eat Pray Love, and The Dark is Rising)

I'm not giving away any spoilers in telling you that the season finale depicts 14 different versions of Jesus Christ, with a 15th shown earlier in the season. While this is never explicitly depicted in the book, it is referenced that there are multiple Jesuses - just as the Gods and Goddesses themselves are merely North American iterations of their European, African, and Asian counterparts. That same episode is also the first time the thesis of American Gods is driven home. Namely, that the "old" gods and goddesses get new names and adapt new sovereignty in order to continue to exist. We saw it in earlier versions in the first season - the seductress Bilquis (whose role is greatly expanded to AG's benefit in the adaptation) and the United States' god of guns and ammo Vulcan (whose role, I believe, is a wholly new character in the AG universe).

Easter/Ostara, played to utter perfection by Kristin Chenoweth, starts off as a goddess who has gotten by and been raised up by sharing "her day" with the various versions of Jesus. While not ideal, she continues to draw plenty of power and immortality by the hunting of the eggs and the feasting of rabbit and the speaking of her name, "Easter". However, as Wednesday/Odin points out, people are not truly doing these things in her name. Hijinks and magic ensue, including the first truly powerful display of godhood from one of the old gods since the series began. (Seriously, watch the show.)

What Wonder Woman and Easter have in common is the notion that the gods didn't stop evolving. The archetypal myths still exist. Somewhere deep down in the human spirit we have this urge to retell the tale of the redeemed, the chaotic, the heroic, and the damned. You may love the idea of a powerful triple goddess with supreme powers who holds sway over fate and destruction and the spark of life, who lights up the darkness with her fire. Might I be speaking about Hecate? Or possibly Jean Grey?

Jean Grey, the Phoenix, has three forms: a life-giving force for good, a dark, fiery force of destruction, and a balanced version who is more powerful than both. (The artist, above, is Greg Land, and this is from his work in the Marvel story Phoenix: Endsong.)

Am I suggesting that we all start replacing statues of the gods in our home with action figures? Not necessarily, but I'm definitely saying I wouldn't look at you sideways if you did. The way I have come to understand the divine and our relationship with it is that it doesn't seem to care what name you have to give it in order to have a relationship with it. It existed before humans gave it names. It existed before humans divided it up into cat-headed goddesses and robed gods of sunshine and long before those same humans started clothing their gods in spandex.

I think the point of having a relationship with the gods is to have a relationship with oneself. To be able to dig down inside yourself through story and song and folklore to find your better parts and bring those to the surface. To, from time to time, polish that spark of divinity that resides in each of us, that connects us to the universe and to one another. Our ancestors spoke of Hermes and Frigg and Anansi in order to help give order to the unknown forces around them. But, the point was that they spoke of them. They told stories of their feats and raised cups on their holy days and drew power and gave offering to their slowly changing faces, because behind the names were the wind and rain and stars and slow, burning cycle of the universe.

And I've stopped caring whether you want to call your goddess Wonder Woman or Athena or Inanna or Mother or, simply, Goddess. Certain sects of Wicca teach that the Goddess has no face, because she wears all faces. She is all goddesses, named an unnamed. The God is all gods named and unnamed. And they are each, in turn, simply iterations of a primal divinity. The more I study what is known and what is believed by spiritualists the world over, the more that idea feels right.

I'm sure there is a hard polytheist out there pointing and laughing at their computer screen right now, or maybe they've already got half of a hate mail letter drafted, but that's ok. I don't mind being wrong about the nature of the divine anymore. 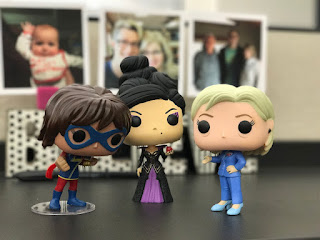 I have this shelf at work where I keep a collection of different pop culture figures that all mean something to me. There's Discord from My Little Pony (yep...I guess I'm a brony). There's Regina from Once Upon a Time. There's Kamala Khan, Marvel's current Ms. Marvel (a bad ass Muslim superhero). Dumbledore, Myrtle Snow, and Maleficent all share a bit of that shelf, too. Do I think of them as gods and goddesses? No. However, they each inspire me in a very specific, very important way. And, when I am having a stressful moment or need to find clarity in chaos, I often look to those figures and remind myself of their stories. Some make me smile, and some, like Misty Day, make me sad, but I don't know that I'd be any more or less inspired than if I were flipping through the pages of a book of mythology (some of which I also keep at my desk for the same reason).

These characters, and their stories, are just as alive for me as the folklore and myths I grew up reading. I read Arthur Cotterell and Edith Hamilton alongside Marvel and DC. While I didn't connect them then, the older I get, the more their realness blends together.