Honesty and the Eclipse

Yesterday the coast to coast solar eclipse gave most of us a reason to pause, to regard Nature. Pagan, Christian, Pastafarian, or simply a human, it didn't matter yesterday. The sun and moon were doing a really cool dance that we don't get to see very often in our truncated human lifetimes. But, to read in some nooks of the Pagan interwebs, it seemed that many were preparing for either catastrophe or enlightenment. I didn't experience either of those things, and I think it's just as important to say when "woo woo" experiences don't happen just as much as when they do.
I've talked in the past about UPG - Unverified Personal Gnosis - and the need to have honest conversations in our community. Podcasts like New World Witchery have done excellent, repeated discussion about spell failures. I think it is equally important to highlight when an endeavor fails or an experience is not had. Why? Because there are a lot of folks that don't have sparks fly from the end of their wands when they swish them through the air or literally hear the voice of deity when they meditate, and they need to know their paths and experiences are just as valid as everyone else's.
It also helps to create a spectrum of experiential conversation in our community.
Vyviane Armstrong - Pagan blogger and spiritual travel advisor (seriously, you should hit her business up) - asked this morning:

And, naturally, there were a lot of responses from Pagans immediately espousing that they, too, felt a great cosmic shift/had an experience/felt this energy as well. Lots of people started glomming on to the idea that they felt this energy was helping them "prepare" for something that's coming. I had a slightly different reaction:

Followed by this quick back and forth: 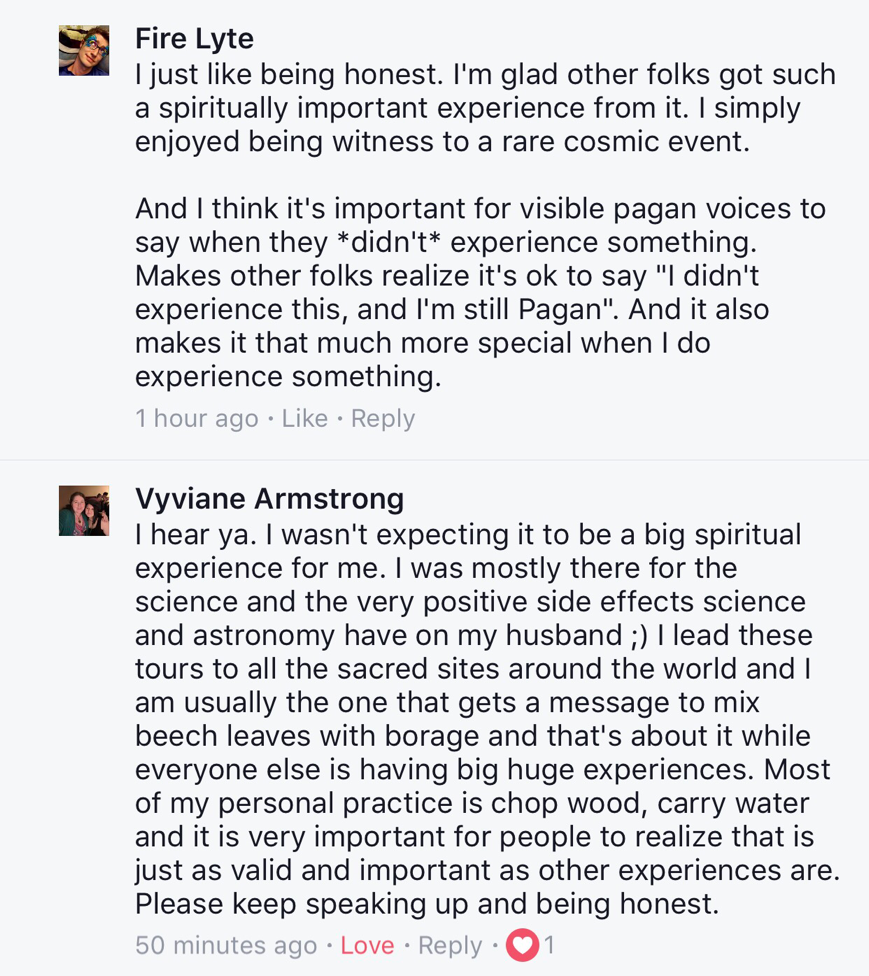 In short, there are a lot of Pagan/Witchy/Spiritual folks that will be writing blog posts and think pieces and posting gorgeous photos of their ritual spaces during the eclipse, and it's enough to make the average Pagan/Witchy/Spiritual person have some severe FOMO. It's enough to cause feelings of inadequacy or question the veracity of your path. When you're locked up in a cubicle out of the line of totality and can't run outside to look at the sun for a few minutes, but you read about how dozens of Pagan writers held massive outdoor rituals and charged objects and have grand plans for all the eclipse energy they soaked up, it can leave you feeling like a bad Pagan. Worse is if you attended one of these events and left thinking "well that was a cool site to see," but then later find out that Susie SuperPriestess heard the voice of the Goddess during the eclipse or Marcus the ManWitch was able to defeat the Fire Nation during the Eclipse. It's those times when it's nice to hear that other Pagans came away, just like you, thinking "shucks that was neat" and that be the end of it.
If you felt something powerful yesterday, great.
If you saw something cool yesterday, great.
If the best you could do was check out YouTube videos of the event after you got off a long day at work, great.
We're all seekers, and it's totally ok and totally valid if your search doesn't always yield results. Just Keep Seeking.
Love and Lyte,
Fire Lyte
Email Post
Labels: Facebook Crossovers Pagan Project Pagan Enough Spirit Talk