Pagan authors and whatever the opposite of reverence is 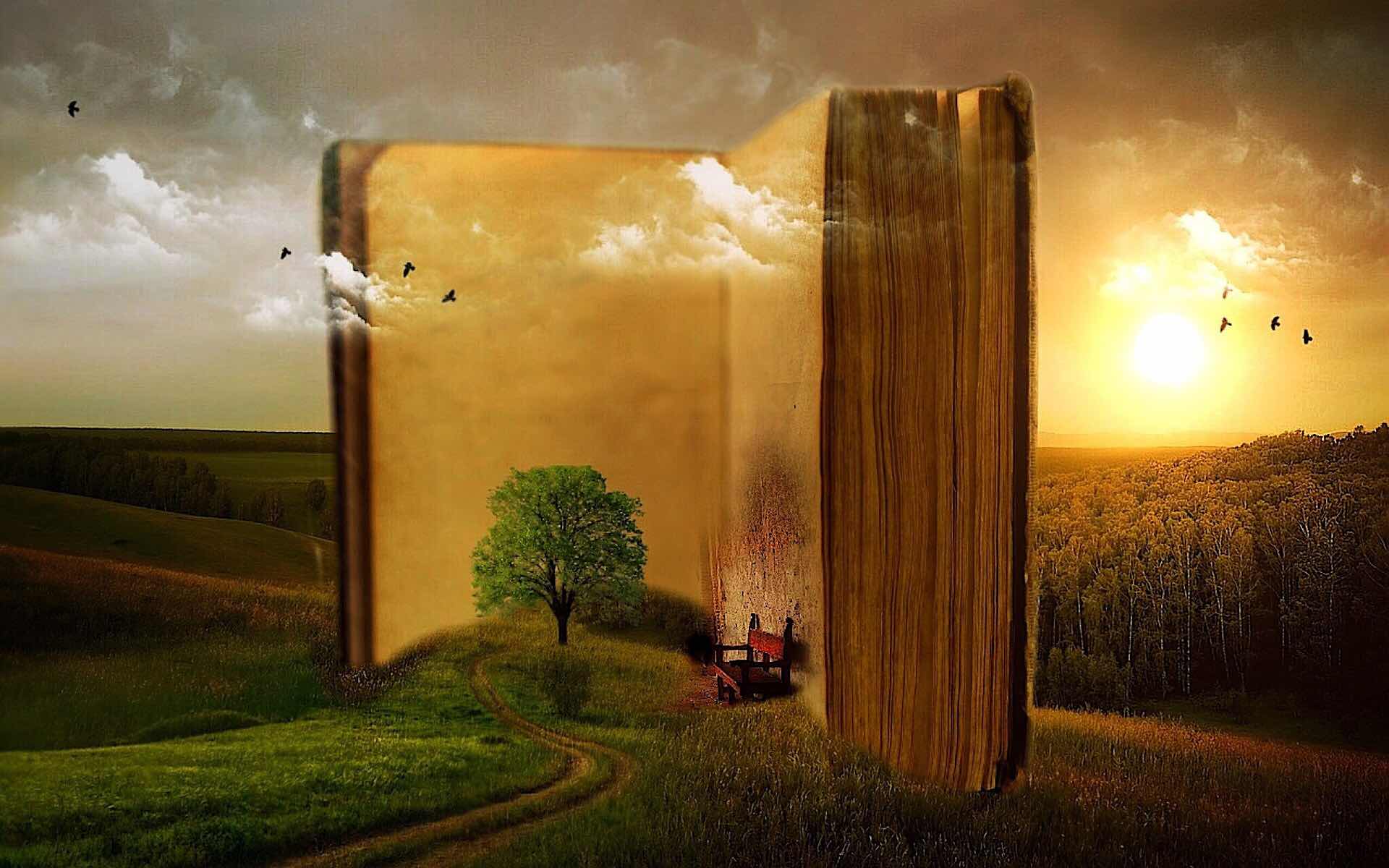 Way back in the long, long ago when I was a baby Pagan blogger, I wrote what I thought was a scathing criticism of traditional Paganism. That’s not correct. I wrote what I thought were several scathing criticisms of traditional Paganism, and I made quite the name for myself in our community as both a herald of critical thought and an unenlightened noob. I’ve had the better part of 10 years to examine some of those earlier positions, and in light of this article on Patheos I wanted to take another look at the perennial beat down of Pagan wayfinders.
The article in question, by Patheos blogger Astrea, is, itself, an argument against the notion that walking a non-traditional Pagan path is somehow experiencing a lesser version of Paganism. While this school of thought was quite prevalent when I began blogging nearly a decade ago, there are enough podcasts and blogs and books and YouTube channels that let the average Pagan know there are as many ways of experiencing Paganism as there are Pagans. Though, to be fair to the author, I’m sure it was quite uncomfortable to be told in a public setting that “non-traditional path witches are as dangerous as unschooled surgeons and doctors”.
I can absolutely get behind the idea that one’s spiritual path can be more informed by what feels right to you rather than a set of ruled and traditions handed down in formal training. That is to say, how many people walk a Pagan path now because their spiritual upbringing didn’t jive with some inner voice that spoke of a different kind of truth? How many of us read the names of old gods in a textbooks and felt a tug to learn more? How many of us walked by a stream or saw a sunset or had a vivid dream wherein each experience whispered of a different way of experiencing the divine?
However, I believe there is quite a lot of value in at least understanding where your path comes from - traditional or otherwise - and how our community came to exist. We’re a tiny but mighty community. As I’ve said before, we represent less than half a percent of the population, yet we have an entire aisle at the bookstore. How many other tiny faiths can say the same? (I’m looking at you, Church of the Flying Spaghetti Monster. The sheer fact that nobody has put out a CotFSM Italian cookbook is some kind of crime and you will not convince me otherwise.)
There is value in understanding who walked the path before you so that, at the very least, you know why you disagree with their way of doing things. I’ll also admit to not reading as much of the work of Gardner or Sanders or Buckland or Crowley as I probably should have over the years, but I have read their work and researched their respective histories.
Researching our collective Pagan history does more than provide a starting point for Pagan education - whatever version of “traditional” you decide. It helps you to be a strong advocate for yourself, your UPG  and it may very well help you find even more ways of experiencing the divine than mere intuition alone.
For example: leaving Christianity meant leaving behind a lot of the holy days throughout the year that helped create and support community - and were a great excuse for a pot luck. Luckily, Paganism had my back with the Wicca-heavy Wheel of the Year. The Wheel is a modern invention of mid-20th century British Wiccans that combined multiple celebrations from multiple sources into one sweet excuse to have a party every 6 weeks. Personally, it’s a fine reminder to check in and examine how life has changed just as the seasons have changed, and honor the highs and lows respectively. It’s also a nice entryway to see all the ways in which we’ve begged, borrowed, stolen, and straight up created traditions from whole cloth. (*cough* Mabon *cough*)
Digging into the background of Samhain or Lughnasadh is a great way to connect with the evolution of modern Paganism, but moreso a great way to start exploring ancient cultures. We should embrace research, especially the research that upsets or challenges us. From finding your own Pagan path to simply meeting and getting to know other Pagans, research is a way to speak a common language. It’s also a great way to know when you’re being straight up lied to.
The Burning Times, human sacrifice, preparations for speaking with the dead, who and what the Devil is inside our community, whether Christianity is all that bad. These are all things that come up in discussion with other Pagans (and non-Pagans who find out you’re Pagan), and a lack of research leaves you ill-prepared for the discussion and open to being misled or poised to misinform others. (Seriously, how can you discuss the Satanic Panic without Crowley?)
I understand that there is a divide between those that practice formalized, traditional paths and those that do their own thing - I’m part of the latter group. But, in the decade that I’ve been in the Pagan blogosphere I’ve seen that divide soften into less of an “Us vs Them” mentality and more of a spectrum. The article above seems to conflate “traditional” Pagan spirituality with researching Pagan history, and they don’t have to be the same thing. From her article: 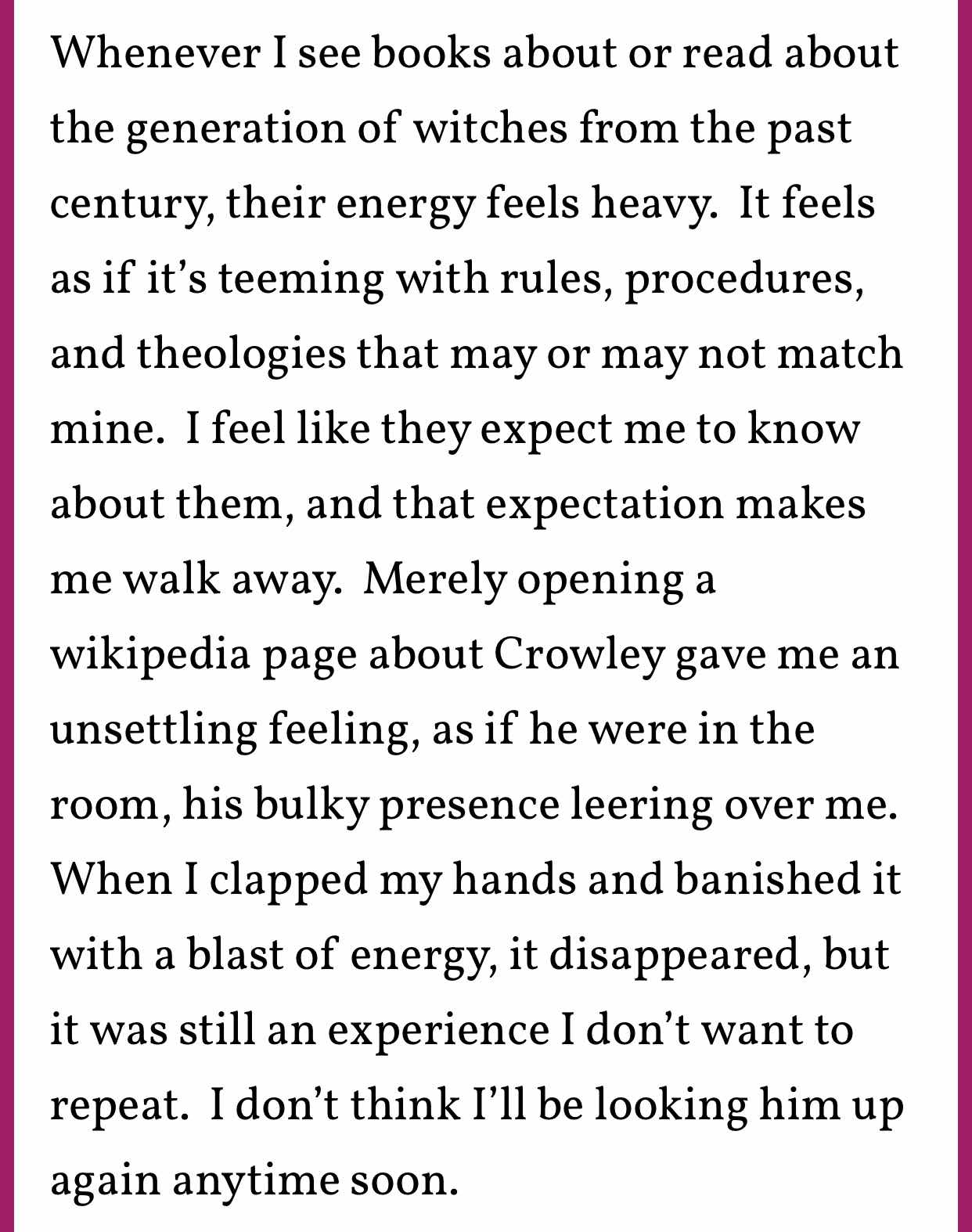 If merely accessing information leaves you feeling as though a spirit of some kind is looming over you and that you must attack it with your energy powers, I don’t quite know how to comfort you. You can think Crowley was a nut job, a dilettante that feigned to take himself more seriously than he actually did, or a font of knowledge, but you should probably have a passing understanding of who he is and how he - for good and for ill - furthered the visibility of modern Paganism. The same goes for the rest of our forebears. If not for Gardner’s eccentricity, would we have been gifted the liturgy of Doreen Valiente? Her words in the Charge of the Goddess and the Wiccan Rede and more have gone on to inspire generations of spiritual seekers.
Research gives us a baseline of conversation and a springboard from which to dive into our own paths. It helps to eschew ideas you dislike and embrace new ways of understanding the divine. We do not have to revere our forebears in order to have knowledge of them, why they did what they did, and how they came to their own conclusions. We can have...whatever the opposite of reverence is for them. They took what they liked and left the rest, which is pretty much the very definition of non-traditional practice.
We should neither fear the act of research, nor should we require it take a specific tract, but we should encourage and delight in it at every turn.
Yes, even the stuff that makes us uncomfortable, uneasy, or undertheimpressionwe’rebeingwatchedfrombehindandneedtoblastitwithourenergypowers.
Love and Lyte,
Fire Lyte
Email Post
Labels: #PaganRage Musings Our Community Pagan Project Pagan Enough