The Rise of #HimToo in the #MeToo era

There’s a new movement that’s gaining ground online that will soon be coming to your social media feed if it hasn’t already. It’s called #HimToo, and it’s a reactionary hashtag seeking to undercut the momentum of the #MeToo movement. If you were a fan of the #AllLivesMatter or #BlueLivesMatter hashtags, thought that “both sides” were to blame for Nazis marching in Charlottesville, or generally think that black people should stop complaining when white officers barge into their home without reason or cause and kill them out of... “drunken confusion”... this is probably your new favorite thing.
Here’s one of the memes being shared across all social media platforms: 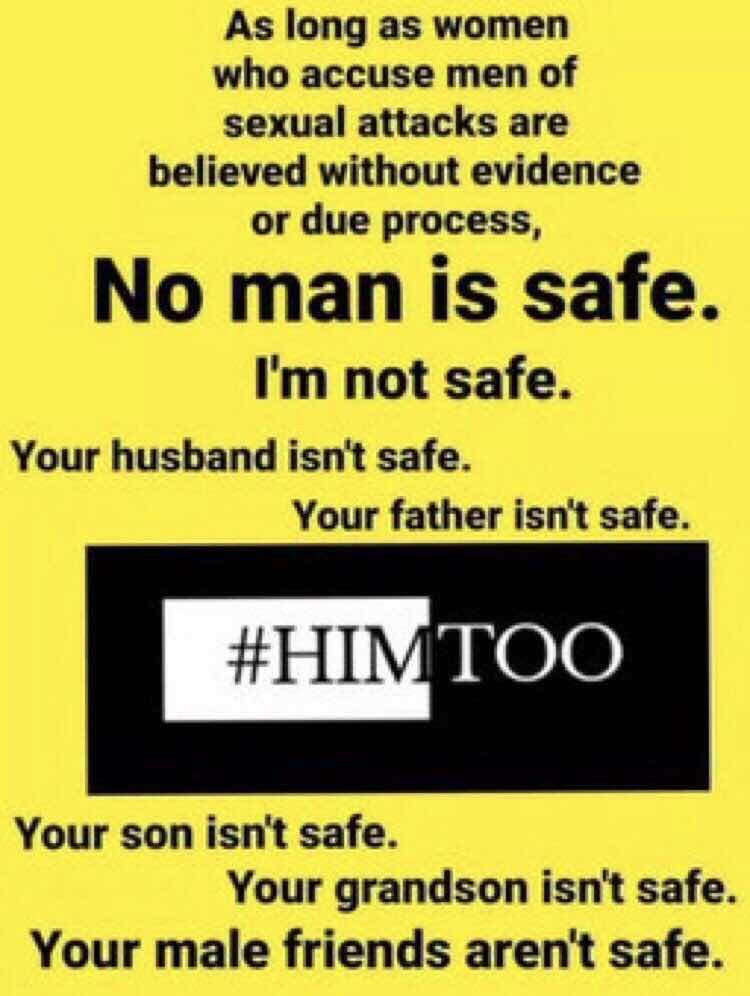 Supporters of the #HimToo movement are pushing back against the notion that women are to be believed when they come forward with allegations of sexual abuse or misconduct. They think...well...let me let them tell you in their own words:

In short, these people think that women who come forward are lying. En masse. The logic is, of course, that women are coming forward to ruin the lives of men. I believe Simcha Fisher said it best: 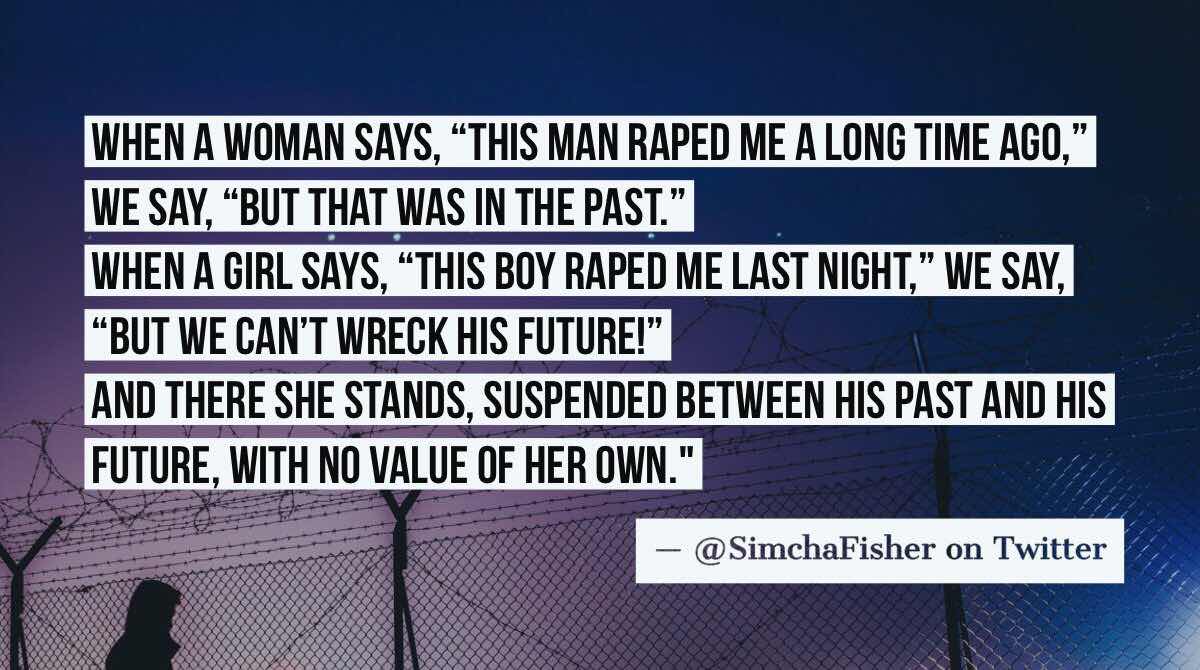 I want to address this notion that women are vindictive bitches that are simply seeking revenge because of grudges or perceived slights or whatever some troll has drummed up as just cause for invalidating their voice. (Seriously, search the hashtag. It’s nothing less than deplorable the kind of things this movement’s supporters are saying.) Numbers don’t lie. People do, but numbers don’t. Numerous studies have been conducted in an attempt to determine how many allegations of sexual assault are false. You may have seen some numbers such as 2% or 10% floating around. Those don’t seem to be supported by modern studies. The number is somewhere in the middle. Somewhere between just over 4% and 5% of allegations of sexual assault - rape, specifically - are believed to be false.
These studies have their own downfalls. One study in 2017 doesn’t include cases of disputed consent, where one person says yes and the other says no so the compromise was that the yes person got their way. Studies that find larger numbers tend to include things such as intoxication, delayed reporting, victim retracted their statement, or they could find no evidence of bodily harm. The most important number amongst these, however, is that of those cases where the allegation is false (remember, that number is something like 5% of the whole), only 3% of those cases were done for malicious reasons - ie they wanted to do harm to the person’s life by bringing forward a terrible allegation according to a long term study by the Ministry of Justice in the UK.
Some quick math for you. If we have 100 cases of sexual assault and 5 of them are not true, that means that 95 of them were. Also, of the 5 allegations that aren’t true, 0.15 of them were brought forward for malicious reasons. Less than 1% of allegations of sexual assault are brought forward for malicious reasons. Or, to translate it into internet troll lingo, 0.15 of all accusers are “lying bitches”. 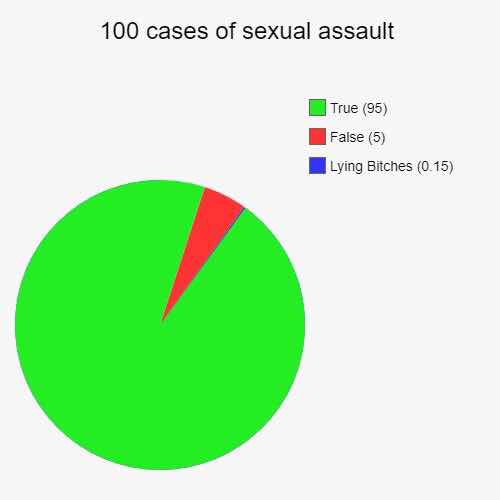 This says nothing, of course, for the fact that many of these crimes go unreported. It says nothing for the fact that 1 in 6 women are survivors of sexual assault. That the average age of victims starts at 12. That these statistics compound if you’re a trans woman, especially a trans woman of color. The numbers for sexual assault are enough to make you cringe.
But not everything is sexual assault. Not all acts being brought to light in the #MeToo era are forced intercourse. Brett Kavanaugh’s first accuser, Dr. Christine Blasey Ford, isn’t alleging that she was raped. She was assaulted and held down, but not raped. Anita Hill did’t come forward to say that Clarence Thomas raped her. She brought to light the serious issue of workplace sexual harassment, an issue that 81% of women say they experience.
The #MeToo movement is about empowering victims - not just women - of harassment, abuse, and assault to come forward with the understanding that their allegations will, for the first time in modern memory, be given legitimate belief, empathy, and that their abuser will be brought to justice. This is true for all levels of income, renown, and political leaning. Sure, proponents of “men’s rights” or #HimToo may try and point to cases where false allegations were made. We must recognize that they exist. We must accept that as fact. But, there is at least a 95% chance that the person coming forward is pointing to the correct person and that the abuse or assault actually happened. And, if it’s not true, there is less than a 1% chance that the allegation was a malicious lie. Those are good odds for belief.
Accusers have nothing to gain and everything to lose by coming forward. The Patriarchy doesn’t crumble over night. Cisgender, heterosexual, Christian, wealthy white men are still the ones that hold the wealth and power and given the benefit of the doubt in all cases. They are disproportionately responsible for the majority of crimes, but they disproportionately serve less jail or prison time for those crimes than their minority counterparts according to the FBI’s Uniform Crime Report.
And, as a cisgender, middle class, white man myself, may I say something to the #HimToo movement.
You say that “no man is safe.” I don’t want to feel safe. I don’t need to feel safe. I shouldn’t feel safe. Nobody is owed wealth or status or fame or a seat on the Supreme Court. Nobody should feel safe and secure that their crimes will go unanswered and that they are above the law by dint of being a man. Men should not be seeking safety, because women and minorities in this country and around the world by and large haven’t ever felt safe. If a person loses their job because they committed a crime, that is not the victim’s fault. Likewise, it is not the victim’s fault if they have a problem seeking employment in the future
Growing up gay in the south meant that I was constantly terrified, and going back to visit as an adult leaves me on edge the entire time. After I was bashed, I stopped going out to gay clubs - and I rarely went out alone at night to unfamiliar locations - because my attackers were waiting outside to play capture the fag. Nobody seeks to be victimized, and victims are rarely believed and even less often see justice.
The #HimToo movement is cowardice. It is seeking to silence the over 99% of victims who come forward with good faith allegations of harassment, abuse, and assault. And, sadly, it’s growing online and is being echoed in press conferences as of yesterday by the President of the United States.
Love and Lyte,
Fire Lyte
Email Post
Labels: #HimToo #MeToo Controversy News Sociology 101