I thought I'd be a better Witch by now. 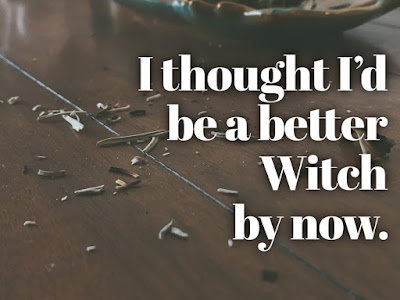 Stop me if you've heard this one before.

When I first discovered the New Age section of the bookstore and read my first Scott Cunningham book while sitting cross-legged in the aisle hoping that nobody walked by who knew my mom, I knew beyond any doubt that when I got older my home would be filled with large bundles of hanging herbs ready to be crushed and prepared in my large, well-worn mortar & pestle, to be added to a simmering copper pot on the stove and bottle for use in the light of a waxing moon. I knew in my marrow that I would decorate for every sabbat and every esbat and I would have a large circle of equally magical friends who would wear subtle silver jewelry that seemingly whispered to fellow witches in public - we are the same, you and I.

As I became an adult and got my own apartment and began sharing my life with someone else, I was proud that I set up an altar in my home that could become the spiritual center of my house. A place to pray and work and keep a home for the gods. And, from time to time, there is work done at that table. And, yes, it sits in the front of my home, proudly keeping a flame lit to the gods of my understanding. These days, however, that's about as spiritual as it gets for me.

And now we are in a Quarantine.

And all I have is Time.

And I keep chuckling to myself about all the things I said I'd do if I had time.

I'd become a better artist. I'd write in my poetry journal daily. I'd blog more. I'd relearn to knit. I'd finally paint the interior of my house. I'd make my bed every day. I'd clean daily. I'd have the time to be more present with my husband instead of using our little bit of time together in the evening as an opportunity to catch up on mindlessly scrolling between three social media apps while we have Netflix on in the background.

When I was first introduced to the world of Internet Pagans, I became entranced with the witches who seemed to be witches all the time. Storybook witches. Witches who made special ink to write special things in special books. They made special things by hand. They always had the right herb or spell or remedy. They read special books about special topics and could quote them in ways that felt intimate and ancient and special. And then I became an Internet Pagan. And those people became my contemporaries. Some became my friends. And I got a peek behind their special curtains. I found out all of us are busy. All of us are burdened with time, adult responsibilities, inconceivable bouts of boredom or laziness, or simply not feeling that being a Witch (capital W) was the Most Important Thing About Us.

That not even my Internet Pagan Heroes were the kind of witches I thought they were...all the time. That they're busy running businesses and packing products or giving talks or working mundane jobs 55 hours a week. They spend their days chasing after kids or grandkids or caring for neighbors or...in some instances...burning away their precious hours laying on a couch scrolling through social media apps wondering how everyone else has all this time on their hands.

I found out it's ok that a spiritual path look less like a storybook witch or an Instagram feed or a YouTube channel or a curated blog and more like finding a little pocket in your heart and carrying your beliefs around in it. Letting your mileage vary.  Being ok with other people thinking your path is less so, and not needing to battle them about whether it is valid. Not needing to battle others for validity period.

My spirituality expresses itself in the stolen moments when inspiration strikes and I reach for my poetry journal and write furiously and urgently. When I can smell art, and know that it's time to grab a pencil and paintbrush and make a mess. My magic shows up thinking of all the smiling faces that will enjoy the pie I make by hand. And, yes, I still light my candles and say quiet prayers and give silent thanks and hold a place for the divine in my home and in my heart, and I'm okay that I haven't become the witch with large bunches of herbs drying in a window. And I'm ok that I sometimes don't say those prayers or light those candles or forget to buy the candles or let my altar get dusty.

This Quarantine has taught me to slow down and examine what is important and necessary in my life, and I look around and see all the things I thought time had stolen from me and realized that...perhaps...we are only built to do one thing at a time. And maybe I'm never going to be the witch that teenage me sitting in the aisle of a bookstore thought I'd be, and the sooner I accept that the sooner I can get on with loving the kind of witch I am.